A mother-of-three abandoned a holiday at a Pontins resort and drove straight back home after being given a chalet that was not ‘fit for a dog’.

Hayley McClure, 30, checked in for a two-night break at the site in Burnham-On-Sea, Somerset, with her three young children and friend Christine Evans, 54.

But she was shocked when she arrived at the Pontins Brean Sands resort and found broken furniture, a limescale-encrusted kettle, and a generally filthy suite.

Hayley McClure, 30, pictured with her ten-week-old baby Leo, checked in for a two-night break at the site in Burnham-On-Sea, Somerset, with her three young children and a friend 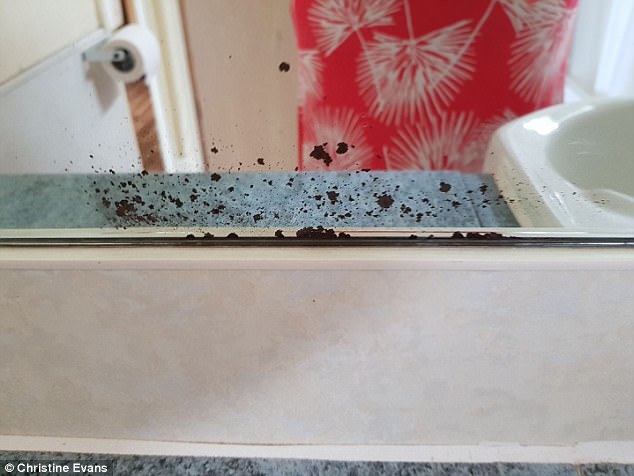 The chalet at the Pontins Brean Sands resort in Burnham-On-Sea, Somerset, had a rusty mirror 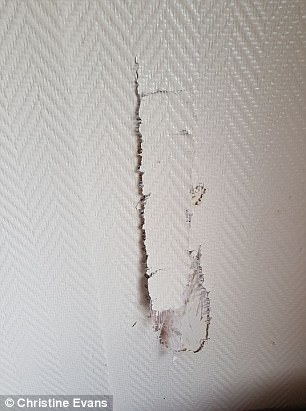 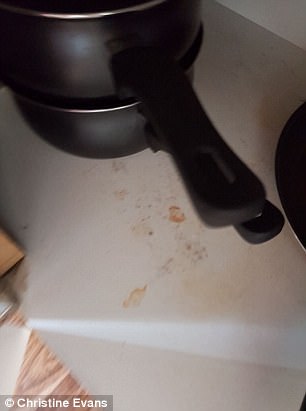 She said it was so bad that her children – including her ten-week-old baby – burst into tears and the family packed up and left and drove home for two hours in the dark.

Ms McClure, Barnstaple, Devon, said she works in a holiday park and therefore knows the hard work that goes into maintaining most resorts.

She booked the stay to reminisce about the happy childhood memories she had staying in similar places, but said she was shocked by the level of decay.

Ms Evans, who works in the hotel industry, said she would not even ‘let a dog stay in there’ and that it was a ‘health hazard that should be condemned’. 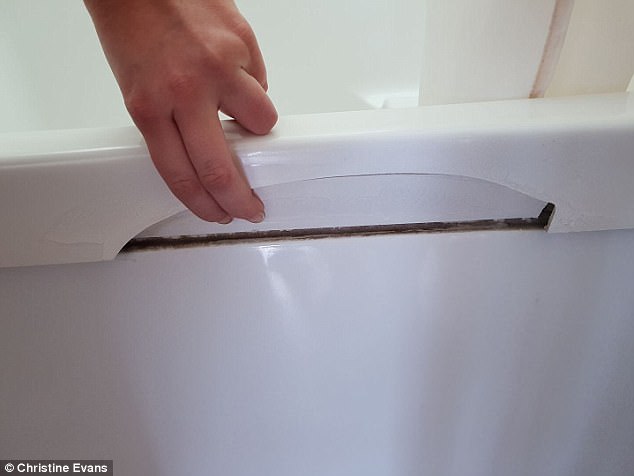 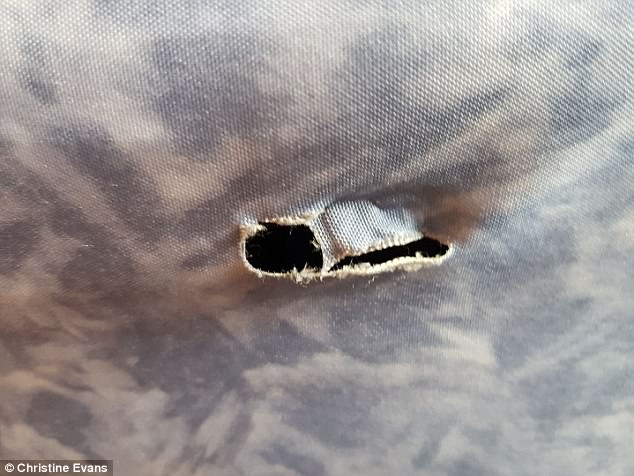 Ms McClure said: ‘It was a traumatic weekend. It’s the worst place I have ever been to. First impressions are everything and even the welcome sign was faded and dirty.

‘It just got progressively worse from there. There was mould on the back of the curtains of the chalets we passed and I was hoping they were just older ones that were soon to be replaced or refurbished.

‘But ours had mould too and my son’s not even had his injections, so we couldn’t possibly have stayed there.

‘We tried to stay positive about it when we booked in on Facebook to say we were heading to Pontins and friends commented ‘you are joking – you’re going to hate it’.

‘We chose to drive home with upset, moaning children rather than stay there – even my daughter said she’d rather go home.’ 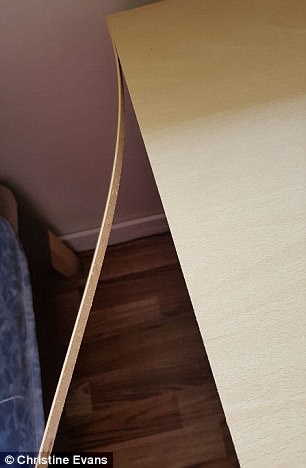 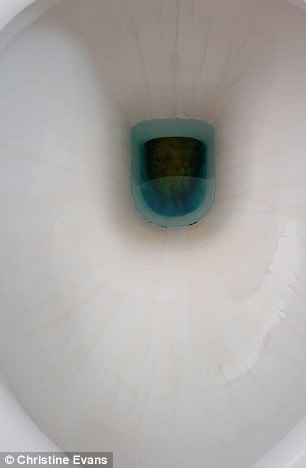 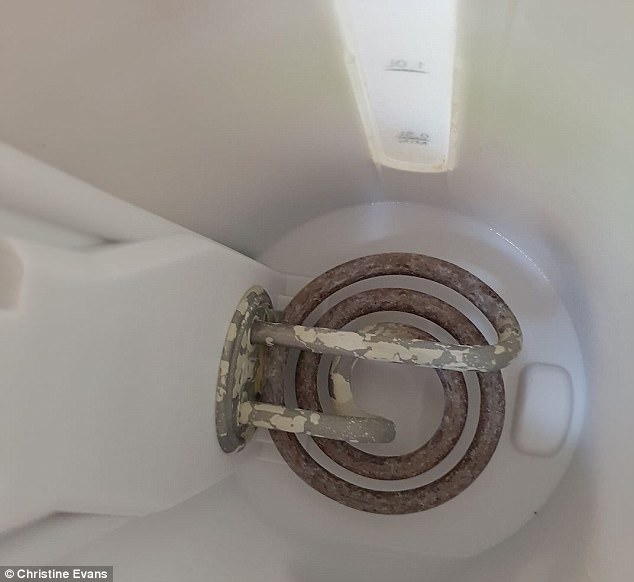 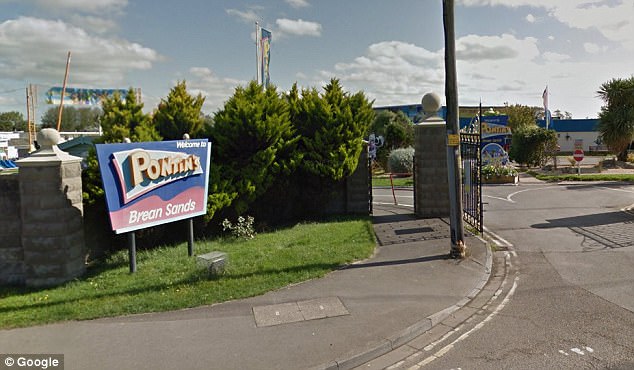 Ms Evans added: ‘It was absolutely horrendous – there was rubbish everywhere. It looked like a pre-war camp. We checked in and after seeing the condition of our chalet decided to complain to reception.

‘But they said they could offer us another chalet but it would be of the same standard so we said ‘well it’s pointless us even looking at it’.

‘We tried for two hours to find alternative accommodation but everywhere was fully booked – I can only assume everyone was trying to escape Pontins. The place is a health hazard – it should be condemned.’

Pontins Brean Sands is currently marked at two stars on website TripAdvisor with 52 per cent of those who have rated it saying it was ‘terrible’.

The site has been contacted for comment by MailOnline this afternoon.

The claims come just three days after MailOnline reported on another family telling of their horror at a dirty chalet at the same site:

BY KELLY MCLAUGHLIN FOR MAILONLINE (September 3, 2017)

A British family was left disgusted after finding their rented holiday home covered with dead flies, mould creeping up the walls and thick grease in the oven.

The family, from West Bromwich, said the mould and dead flies were just the start of a weekend-long holiday from hell at Pontins’ Brean Sands resort last month.

Iain Bate, 34, his fiancee Zoe Griffin, 31, and their three-year-old son, Evan, were due to spend a long weekend down at the resort, but their break was cut short when they were horrified by the ‘horrendous’ state of their guesthouse.

On Friday August 11, the family – who had purchased the break for £149 on Groupon – travelled down to the park and were greeted by the grim conditions.

Iain Bate, 34, his fiancee Zoe Griffin, 31, (pictured above with their three-year-old son, Evan) of West Bromwich, were left horrified to find dead flies, balls of hair and more at their rented guesthouse at Pontins’ Brean Sands Holiday Park. 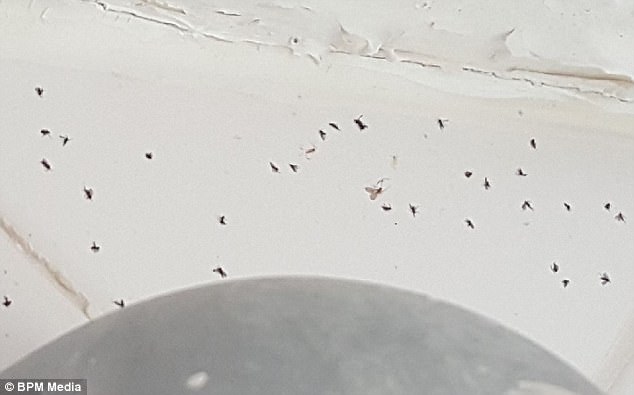 The family, from West Bromwich, said the mould and dead flies were just the start of a weekend-long holiday from hell

Just a few of the problems the family encountered included: An oven thick with food and grease both inside and out, chewing-gum stuck to the windowsill, a ball of hair blocking the bath plughole, a broken smoke alarm, cabinets and drawers hanging off the walls and dead bugs dried into the wall above the shower head.

There was also a dirty toilet brush, mouldy tiles and flooring, rust on the bathroom window, a bloody plaster left in the sink, dirt all over the floors and an overgrown garden.

Communications executive Mr Bate told the Birmingham Mail: ‘We couldn’t believe the state in general of the holiday park. Before we were able to check in we spent a few hours there and it was really dated and grubby.

‘The apartment was so filthy we didn’t even let our three-year-old take his shoes off indoors. It really was the holiday from hell.’

Mr Bate went to complain on behalf of him and his fiancee – who works as a retail assistant – as soon as the reception opened on Saturday morning and requested a deep clean for the grimy guesthouse. 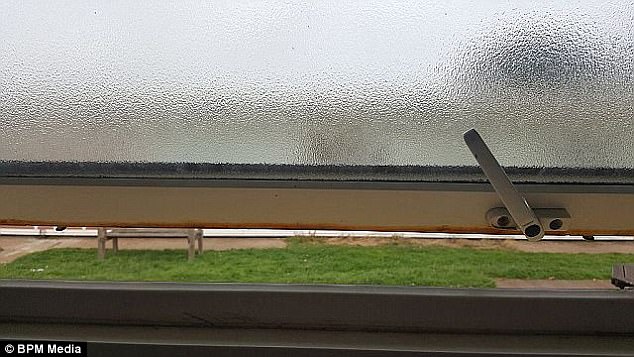 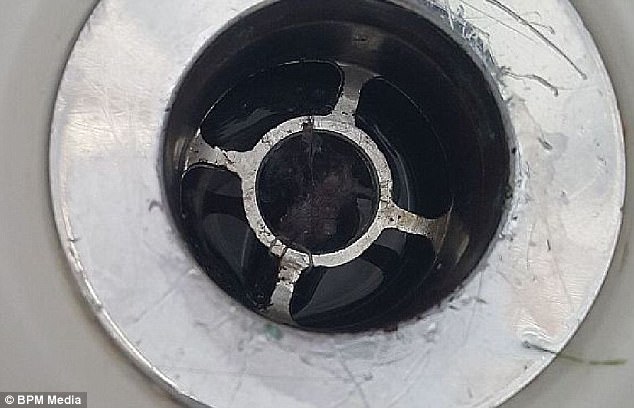 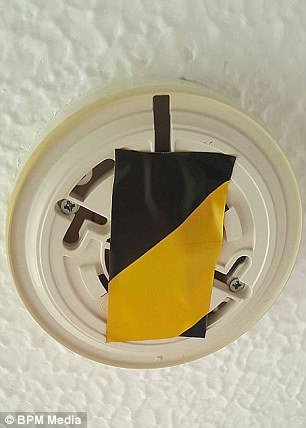 The smoke alarm in the guesthouse was broken (left), and the couple also found mould on the bath (right). The couple spent just 24 hours of their planned weekend holiday in the home

‘The cleaner eventually turned up at 4:30pm but I told her we were leaving so there’s no point in cleaning the apartment.’

The family requested an upgrade on their accommodation but Mr Bate was toldt hey had already been upgraded.

Mr Bate added: ‘The queue for customer services was really long and lots of people were complaining about the standard of the accommodation.’

The family left the apartment less than 24 hours after arriving and requested a full refund from Pontins in their complaint after having to fork out £140 for another accommodation in Weston.

Mr Bate added: ‘We were really looking forward to going away as a family and our holiday was ruined by the state of the park and accommodation.

‘The whole place needs to be knocked down and fully refurbished. I just hope other people realise what they are letting themselves in for before they decide to go to the Brean site.’

In a letter responding to the family’s complaint, Pontins apologised and on investigating the claims, admitted the guesthouse did not meet Pontins’ standards. 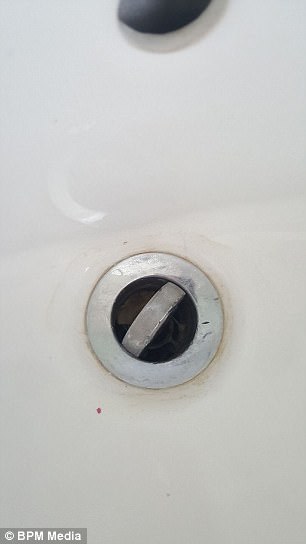 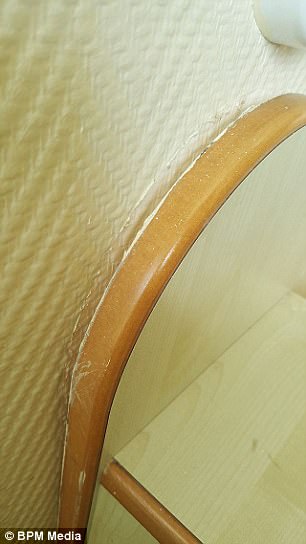 The couple found plaster in a plughole (left) at the holiday home and noticed that bedside cabinets were falling off of the wall (right). Communications executive Mr Bate said he and his fiancee couldn’t believe the state of the guesthouse. They had purchased the holiday for £149 on Groupon 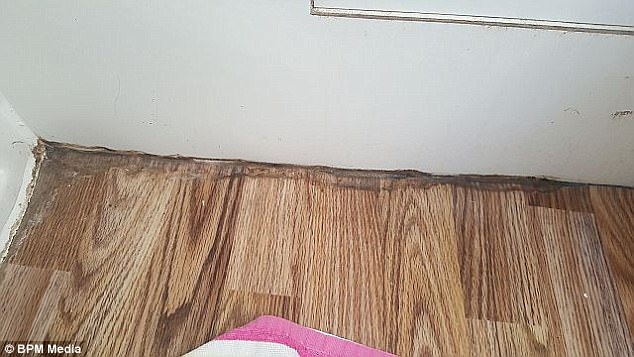 In one corner of the guesthouse, the couple found that the vynil flooring appeared to be rotting due to dampness underneath

A ‘complaints handler’ wrote: ‘We were very sorry to learn of the problems you encountered with the accommodation you were allocated and we have noted all the points you have raised.

‘It is our intention that all accommodation is fully prepared for incoming guests and that no problems will be encountered. In the circumstances we can now only offer our sincere apologies that this was not the case.

‘Pontins continues to invest heavily in the refurbishment of our accommodation and facilities in order to bring them up to the expected standards, and resources are also invested in the staff training programme in order to enhance guest care.’

The letter continues to state that in response to feedback from its guests, Pontins has invested in new mattresses, cookers and electrical equipment that are being rolled out across the parks.

‘I have investigated your complaint and can see your stay did not meet our expectations,’ Stephen wrote.

The family were then offered £99 as a goodwill gesture for the nights they didn’t stay at the apartment – which they accepted. MailOnline has contacted Pontins for a comment.