Zara Tindall has opened up about feeling ‘mum guilt’ and struggling to get her body back after welcoming three children in a candid interview with her husband Mike.

The former rugby ace, 44, sat down with his wife, 40, for a new YouTube series called ‘Mike Drop’ in collaboration with the Magic Millions horse-racing event in Australia.

In an interview which was shared last night, the Olympic equestrian appeared emotional as she discussed her sporting career, relationship with horses and struggles with motherhood, touching on her experience of miscarriage.

She explained she found it difficult returning to riding after having her children, Mia, eight, Lena, five, and Lucas, 18-months, saying: ‘I found it hard getting myself back to it. Mentally, you feel guilty as a mother leaving your child to go and do something else.’

Zara Tindall, 40, has opened up about feeling ‘mum guilt’ and struggling to get her body back after welcoming three children in a candid interview with her husband Mike, 44,

In the wide-ranging interview, she revealed how, after having her eldest daughter Mia in 2014, she was determined to return to riding.

She told Mike: ‘After having Mia, I felt like my goal was to get back on a horse, I want to get back.

‘I had a good horse to come back to for your confidence and trying to – I wanted to get back for him as well. Trying to have a goal is probably something I always need. 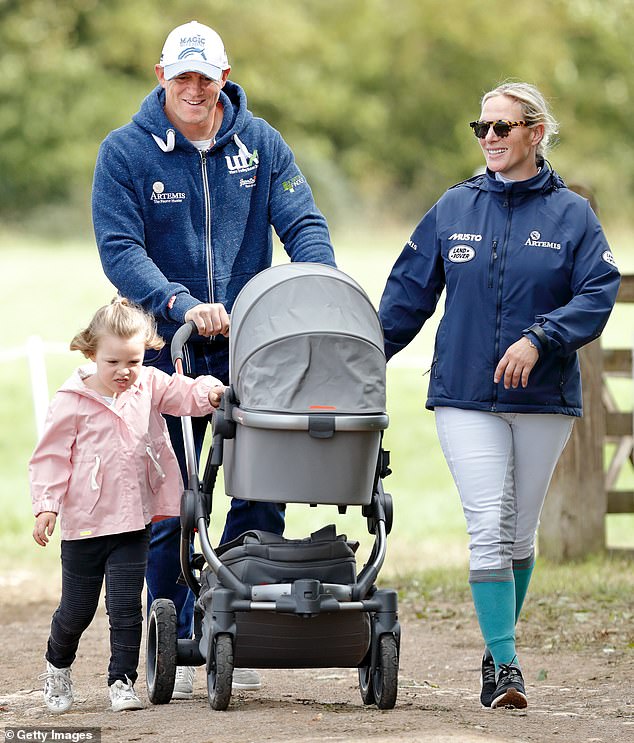 In an interview which was shared last night, the Olympic equestrian appeared emotional as she discussed her sporting career, relationship with horses and struggles with motherhood, touching on her experience of miscarriage

However she said she had struggled, saying: ‘It was hard getting your body back when you’ve been riding for 25 years, and then your body is just completely not doing that.

‘Your muscles [are] doing nothing and stretching and creating an amazing thing but it’s completely different.

‘Trying to get your body back to where it was, I found, was hard work.’

Meanwhile she acknowledged how the couple had balanced Zara’s career with life as new parents, adding: ‘Mia was along for the ride with us as well.

‘She was very much taken around to the shows – it was easier when we had one.’ 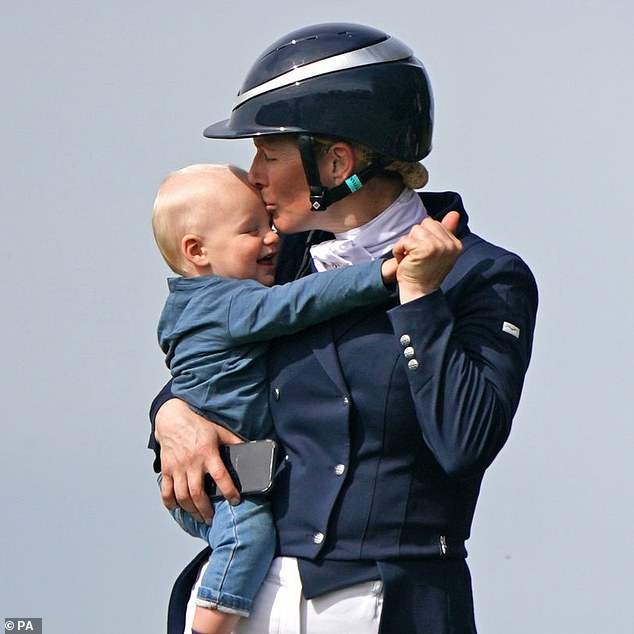 She explained she found it difficult returning to riding after having her children, Mia, eight, Lena, five, and Lucas, 18-months

However Zara also discussed ‘mum-guilt’, telling Mike: ‘I had to ring you every day to make sure you were doing the right thing.

‘You do feel guilty. I felt guilty all the time. Even just going to go and ride. I just thought, that’s an aspect of my life now.’

Mike went on to touch on the couple’s experience of miscarriage, which Zara has discussed on a number of occasions.

He said: ‘Seven year period with kids, your riding has been on and off, we lost a baby along the way, you’d had to stop riding before that and you’d missed another chunk of time. 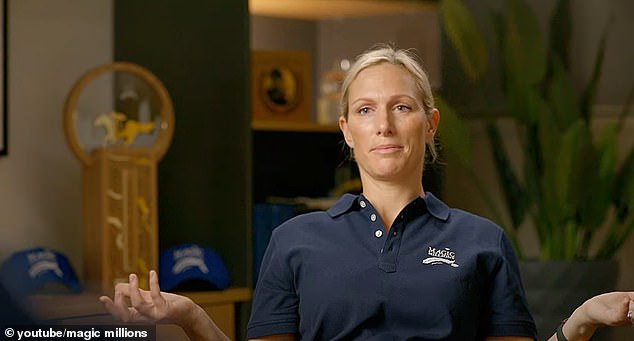 During the interview, Zara said she hoped her equestrian career had helped her to become a better mother 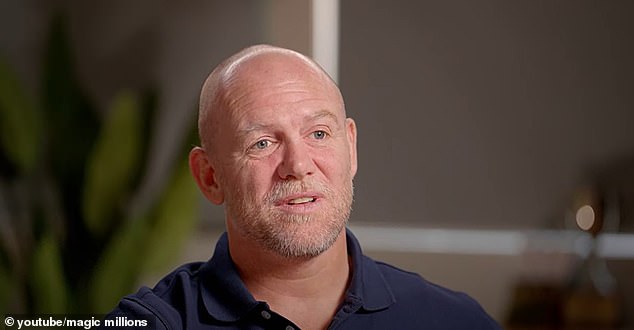 Meanwhile Mike touched briefly on the couples’ experience of losing a  baby, asking if she felt she had given her sporting career ‘everything she wanted to give it’ during the period

‘Did you feel during that time, you gave it everything you wanted to give it?’

Zara responded: ‘There’s probably times I would look back on and shouldn’t have gone to certain places but I think – I was lucky, I’d had tournaments and been to an Olympics and been to World Championship and won.

‘The stuff I missed – was down to another great chapter in my life and I’m very lucky that I could run them alongside each other.

‘I’m lucky that our sport I could do both and still ride at the top. It’s been a massive drive for me and I hope it makes me a better mother.’ 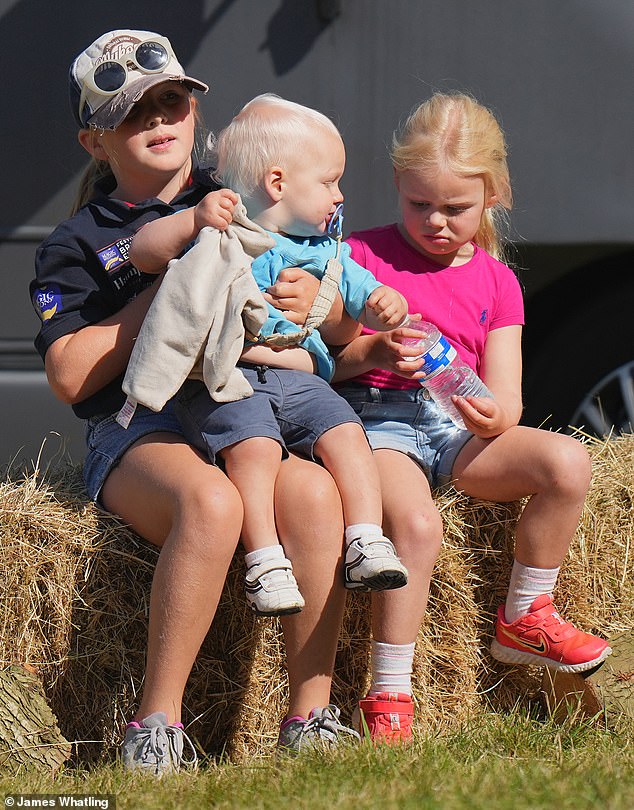 Zara and Mike have three children, Mia, Lena and Lucas, who regularly go to horse shows where they watch their mother competing (pictured last  year)

‘They can experience it with us and with me and all those characteristics about life and competitive life – they will enjoy it as well.’

Elsewhere in the 30 minute interview, Zara touches on how she grew up with horses, her parents love for riding, as well as growing emotional as she discusses her relationship with the animals.

Zara said she felt ‘really lucky’ that she was introduced to the sport because Princess Anne and Mark Philips were riding, saying: ‘If we weren’t in the house, we were in the yard.’

Meanwhile she and Mike also debated who was the most successful athlete, before Zara revealed she still hopes to win Olympic gold in the future. 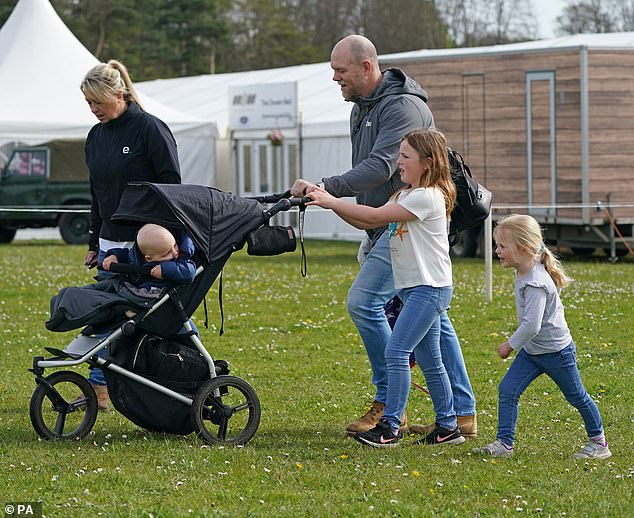 The interview also saw the couple discussing the Magic Millions horse race, which they attend every year in Australia.

Zara was announced as the first Magic Millions Racing Women Ambassador in 2012, and now travels to Surfers Paradise in Queensland every year for the Gold Coast Yearling Sale, seven days of auctions which culminate in this weekend’s major race meeting where all contenders are horses bought at previous Magic Millions auctions.

‘This is an ongoing partnership that sees Zara attend events every year to present gifts to the winners,’ Mischa Jolin, Managing Director of Influencer, PR and Branding agency, Edencancan previously told Femail.

‘She is an integral part of the brand which empowers women within the equestrian field. I would anticipate this partnership is worth circa £125k per year.’

Meanwhile Mike’s latest YouTube series comes hot on the heels of his I’m a Celebrity appearance. 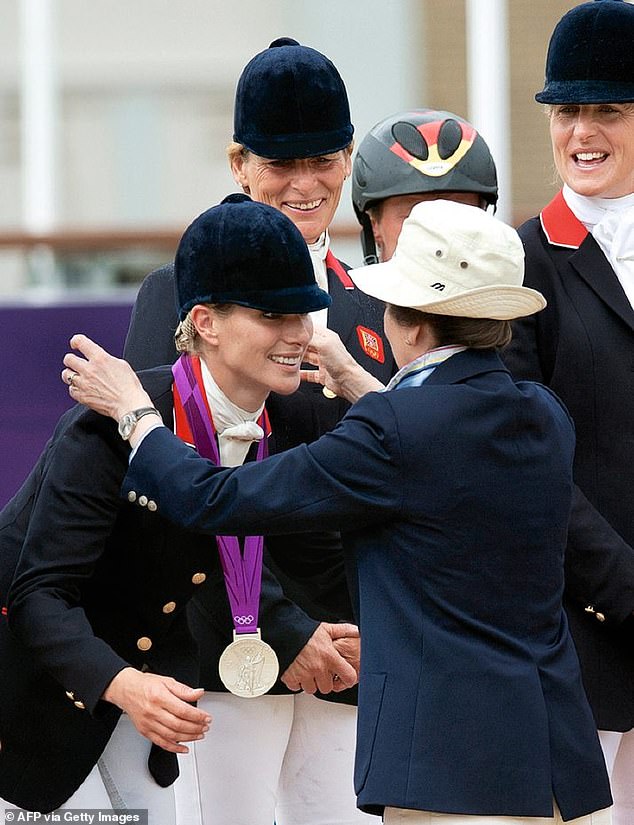 Meanwhile she and Mike also debated who was the most successful athlete, before Zara revealed she still hopes to win Olympic gold in the future (pictured, winning Olympic silver in 2012)

Popular culture and brand expert Nick Ede previously told FEMAIL that the royal would likely earn up to as much as £150,000 for his role in the controversial series.

The brand expert added that appearing on the show could be a great move for ‘brand Tindall’, noting that while he could earn a significant pay out, ‘the true value of the show is what you do after it’.

He told FEMAIL: ‘Whether he gets a prime role as a sports pundit or panelist or host of a show who knows but for ‘brand Tindall’ this is a great step and will increase his celebrity equity ten fold. All eyes will be on Mike this year.’

Earlier this month, the couple put on a loved-up display at the racing event in Queensland, Australia.

Following a turbulent few week for the Royal Family in the wake of Prince Harry’s memoir, Princess Anne’s daughter, 41, and her husband, 44, could not have been more carefree as they kissed for the cameras.

The parents-of-three are currently holidaying in the Gold Coast, with I’m a Celebrity star Mike sharing plenty of snaps from the trip on Instagram.

While Mike and Zara have no official duties, they are regulars at royal family events, such as church services and important milestones like the Jubilee.

Supportive husband Mike, who has often praised the late Queen, was also in attendance at Her late Majesty’s funeral in September.

Mike is thought to be a much loved addition to the royal family, with the rugby ace always enthusiastically greeting the members of Zara’s family when at events together.