Mum sends her son to school with drawn-on eyebrows

Billy-Joe Cain wearing eye liner after he shaved his eyebrows.

A red-faced boy who tearfully confessed to shaving his eyebrows off and begged his mum to glue fake ones on was forced to go to school with drawn on replacements.

Billy-Joe Cain had swiped his step-dad Craig Richardson’s razor from the bathroom cupboard and decided to indulge in some personal grooming when he was supposed to be brushing his teeth before bed.

The 29-year-old mum of five tracked Billy-Joe down to the living room where he was hiding behind the sofa giggling last month.

But at 8am the next day his smiles soon turned to tears when Billy-Joe realised with horror he would have to go to school with just half of his eyebrows intact.

The shame-faced youngster then begged Kylie to glue on some fake eyebrows before going to school.

Kylie from Wigan, Greater Manchester, said: ‘I was just gobsmacked when I saw what he’d done and was laughing about it, I couldn’t believe it. 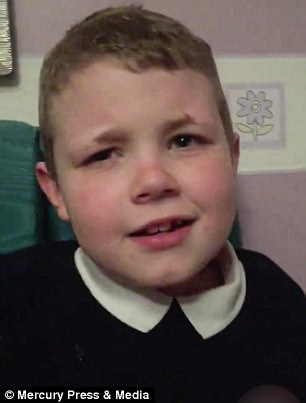 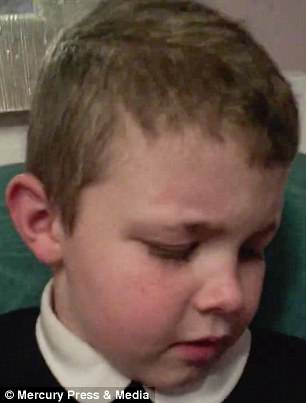 Billy-Joe’s mum said he was laughing which in turn made her laugh. 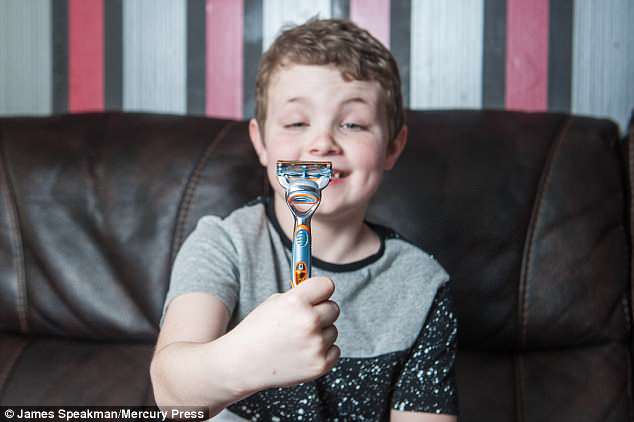 Billy-Joe with the razor he used to shave off his eyebrows, which her borrowed off his dad 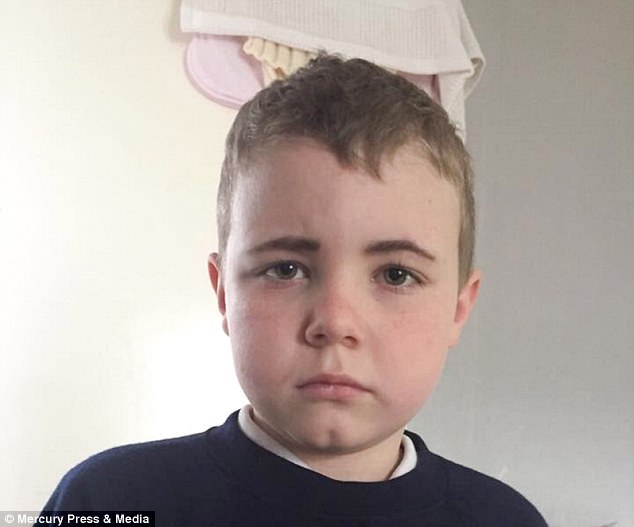 The nine-year-old sporting his improvised eyebrows. He shaved off his original ones when he was supposed to be cleaning his teeth 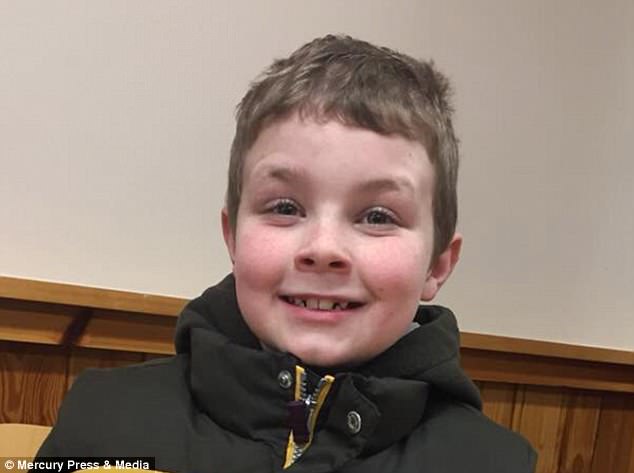 ‘I didn’t know how to react. I was shocked and disappointed, but then kids are just cheeky.

‘He was laughing about it which then made me start to laugh, it was one of those cases whether you either laugh or cry so I chose to laugh.

‘I asked him why he’d done it and just said he didn’t know and that he wanted me to superglue false eyebrows on him.

‘I’ve never heard of fake eyebrows you can glue on so told him he’d have to make do with ones that were drawn on.

‘It took me ten minutes using black eyeliner to draw him some new ones.

‘Even though he didn’t want to go to school I decided to send him in to teach him a lesson – that he shouldn’t mess with razors.’

Kylie had been settling newborn baby Stevie Cain down for the night when her eldest told her that Billy-Joe had snuck off downstairs. 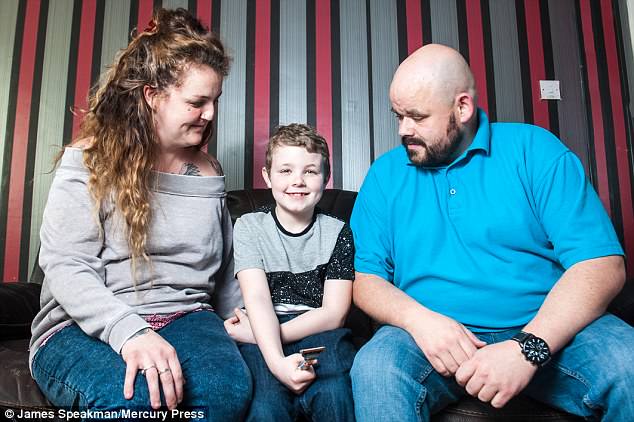 Mum Kylie with step-dad Craig Richardson. She made him go to school to teach him a lesson

The full-time mum discovered the schoolboy crouched down behind the sofa and only found out about his hair removal escapades when he emerged from his hiding spot.

Kylie said: ‘I went downstairs and found Billy-Joe behind the sofa laughing his head off.

‘As I got closer he popped his head out and he didn’t have full eyebrows, half were clean off.

‘We have the razors in the bathroom cupboard on the top shelf which is about five feet high. He must have climbed up on the sink and got them. I couldn’t believe it.

‘His brothers and sisters had a good laugh at him when they saw what had happened.

‘He then came up to my room and sat on the bed. I asked him why he’d done it then he said he didn’t know and that he wanted fake eyebrows.

‘The following morning he said he didn’t want to go to school because everyone would laugh at him but I made him go in.

‘I used one of my black eyeliners to draw him some new eyebrows. It took me ten minutes to do them as it was really difficult to get them equal and to match, but I reckon I did a decent job.’

Craig, 32, took a sheepish-looking Billy-Joe to school and had a meeting with his teacher to explain the situation.

Kylie said: ‘They managed to last all day, I was really surprised. Billy-Joe said that no-one really noticed so was fine about it.

‘He’s been told to keep away from razors and I think after this the lesson has been learned as he’s not been near them since.

‘They’ve taken a long while to grow back but they’re growing back ok.’

Billy-Joe said: ‘I was shocked mum made me go into school but then I thought it was funny.

‘I thought everyone would laugh at me but they didn’t really notice. After what happened I won’t be going near razors again.’