A mother who has lost 33 kilograms from meal prepping has shared the weight loss tricks that help to keep both her budget in check and her weight down.

Melissa Timmer, 31, from Sydney, dropped a staggering 33kg in just under a year by pre-preparing her meals in advance, and cutting out unnecessary snacking.

‘Meal prepping helps me reach my goals for a number of reasons, the main thing is it stopped me from splurging out on bad foods, second main reason is that it has taught me how to cook and prepare healthy but yummy meals,’ Melissa told The Healthy Mummy.

So what are her tips and tricks for meal prepping for weight loss on a budget? 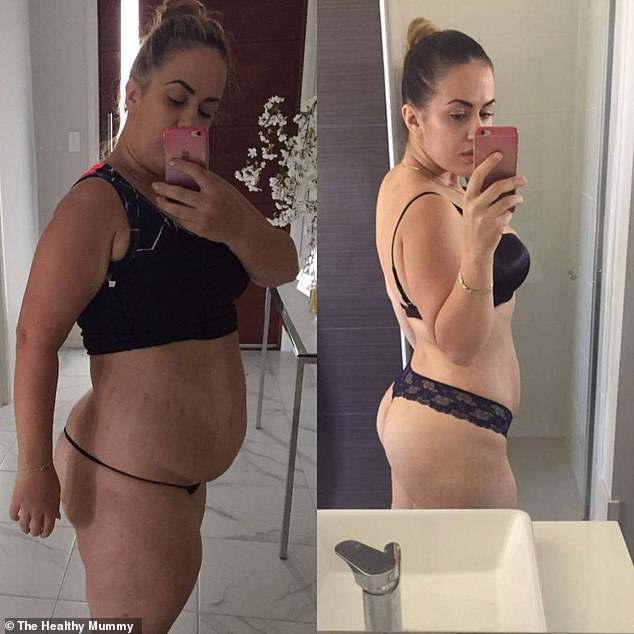 Melissa Timmer, from Sydney, dropped a staggering 33kg in just under a year by pre-preparing her meals in advance, and cutting out unnecessary snacking (pictured before and after)

Before you even think about visiting the supermarket, Melissa said you need a list and a detailed plan.

‘At the start of the week, write out all your meals for the week and then do one big shop of everything you will need,’ Melissa said.

‘That way, you won’t find yourself purchasing unexpected things when you make your way to the shop during the week for the items you’ve forgotten to buy.’

You could also embrace online supermarket shopping, as this is another good way to avoid temptation.

Melissa recommends looking for non-processed foods as much as possible, and steering clear of too many packaged items.

Melissa recommends ‘exploring your taste buds’ and embracing cheap cuisines like Mexican, which is ‘full of flavour and doesn’t cost an arm and a leg’.

‘Things with beans and tomatoes are cheap and easy to make, while also being healthy,’ she said.

You should also make double the amount of what you need so you have something left as leftovers the next day. 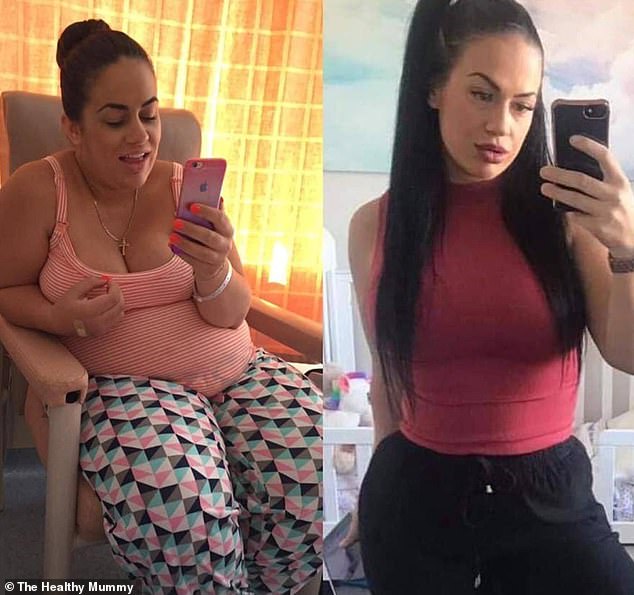 Melissa recommends ‘exploring your taste buds’ and embracing cheap cuisines like Mexican, which is ‘full of flavour and doesn’t cost an arm and a leg’ (pictured before and after) 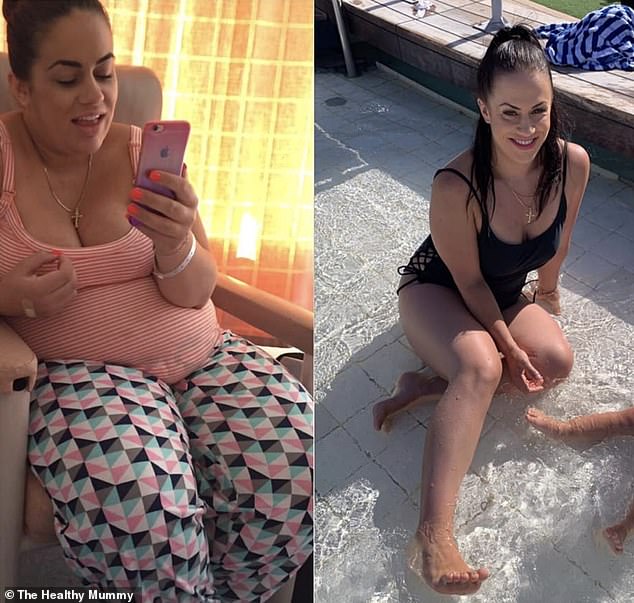 Melissa (pictured before and after) buys home brand items over pricey named brands, as they are often the same quality 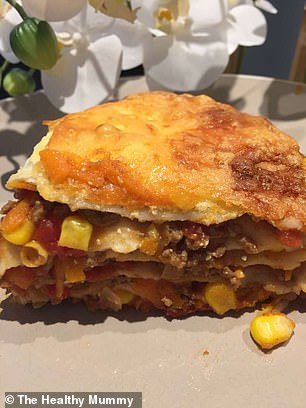 Melissa said she religiously adds more vegetables to her meals instead of meat, so her budget goes further and her meals are healthier (pictured)

Melissa said she religiously adds more vegetables to her meals instead of meat, so her budget goes further and her dishes are healthier.

She will often replace minced meat in bolognese or lasagne with extra carrot or zucchini, and when she sees fresh produce on sale, she’ll buy extra and put it in the freezer to use at a later date.

‘If you can buy in bulk, it’s usually cheaper,’ Melissa said.

Then, just store your food well in glass containers to make it last longer.

If you’re someone who is easily taken by pretty packaging and buzzy brands, Melissa said you should stop now and scan your eyes down the supermarket shelves to the bottom shelves – where you’ll often find the (cheaper) home brand items.

‘Don’t be afraid to buy the store brand as well, majority of the time its the same thing but in cheaper packaging,’ she said.

Then, just keep your fridge and pantry neatly organised at home – so you can always see what you’ve got. 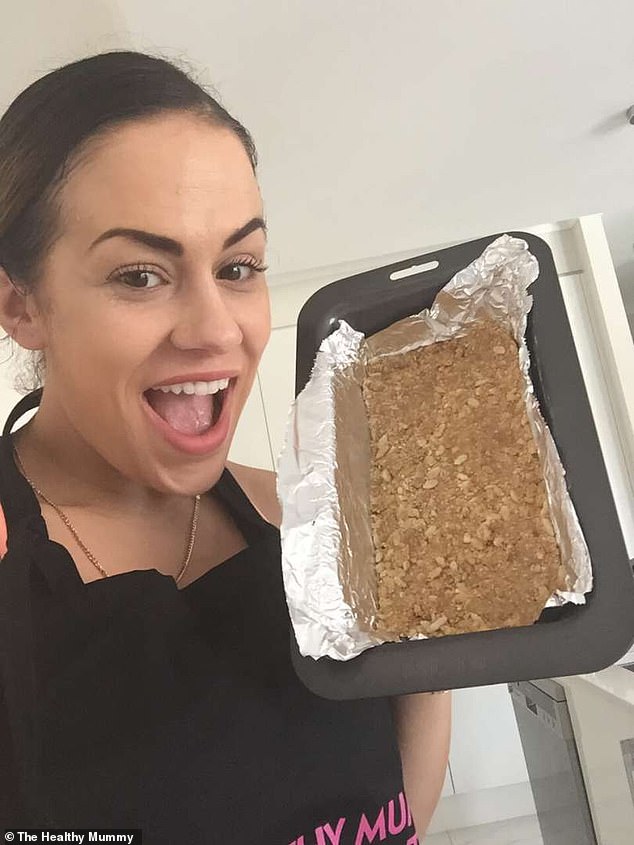 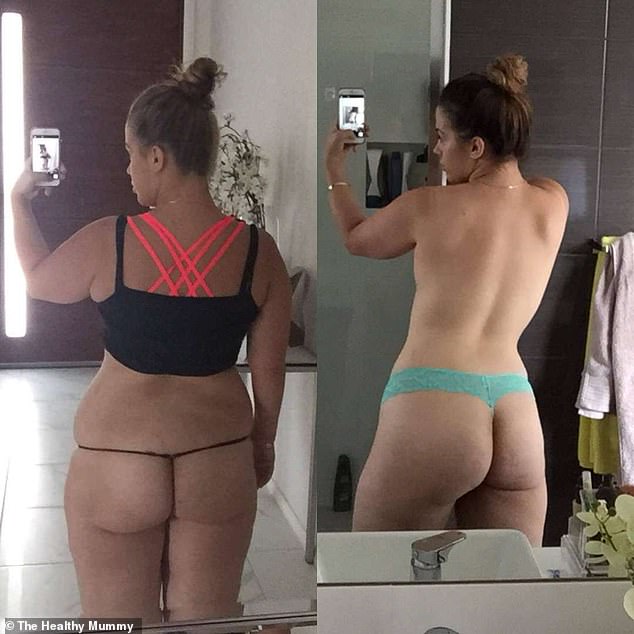 Melissa (pictured before and after) weighed in at 107 kilograms when she decided she wanted to lose weight; she went on to lose 33kg in nine months

Melissa previously revealed how she took charge of her health to lose weight.

‘I weighed in at 107 kilograms and about a size 16/18. I wanted to lose weight and get back into shape, while still being able to breastfeed my daughter,’ she told FEMAIL.

Her tactic was to put herself first for one hour per day where she would do simple body-weight exercises like squats and push ups and do basic cardio like star jumps and running.

‘I went on to lose 33 kilograms in nine months and I also gained so much knowledge about how to eat healthy and fuel my body with yummy good foods,’ Melissa said.

‘My eczema has disappeared and my skin is just glowing every day, you would have never known I had a severe skin condition that would bleed every day.’

She now takes pride in making sure she has one hour for herself daily for exercise, and eats plenty of wholefoods and smoothies.