A mother who used to have sex six times a day claims her hysterectomy ruined her life and left her single as she hasn’t been able to make love for two years.

Jessica Shaw, 30, from York hasn’t had the confidence to get intimate since she had the procedure in September 2017 while battling cervical cancer.

She couldn’t have sex with her partner during her treatment and then, in August 2018, doctors discovered they had missed a tumour and told her she needed radiotherapy.

The heartbroken mum claims when she turned to her boyfriend and told him her heart-rending news, the relationship of three years ended as he couldn’t cope with the lack of intimacy.

Jessica Shaw, 30, pictured at her home in York, used to have sex six times a day but claims her hysterectomy ruined her love life and left her single

And despite getting the all clear from the disease late last year, she is still too scared to regain her passionate former ways.

Jessica, who is also calling on women to undertake cervical cancer smear tests promptly after putting hers off for 10 months, said: ‘I’ve not been intimate with anyone since my hysterectomy.

‘I’ve heard a lot of horror stories so that really put me off. Sex has always been an important part of my life.

‘I’ve always enjoyed being intimate with the people I love, so not being able to have sex has been very difficult.

‘There’s no doubt that my diagnosis led to the break up of my relationship.

‘I’d like to be intimate again with someone, but they’d have to be really special.’ 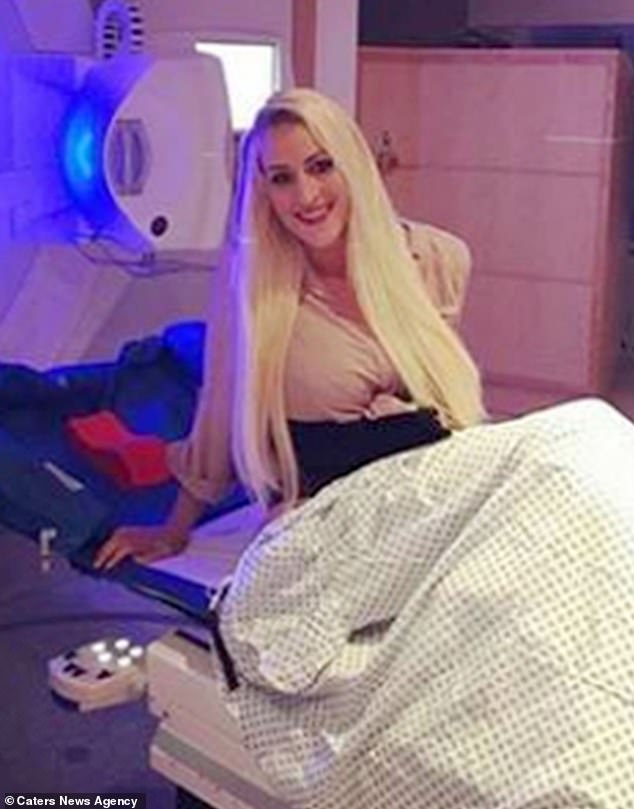 The mum-of-four pictured during her cancer treatment. Jessica was diagnosed with stage three cervical cancer in May 2017 and was told she needed a hysterectomy 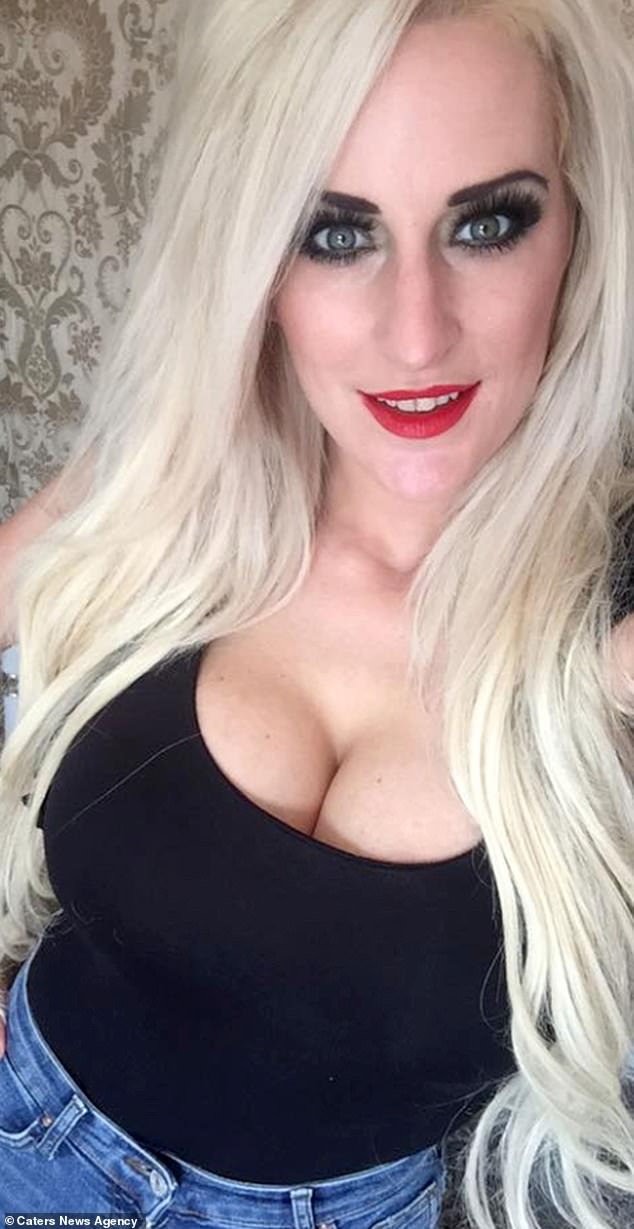 Despite getting the all clear from the disease late last year, the 30-year-old, who used to have sex six times a day, is still too scared to regain her passionate former ways

Jessica was originally diagnosed with cervical cancer in May 2017, three months after the birth of fourth child Ivy, two.

The mum visited her doctor after suffering from a bad back and feeling nauseous, and was promptly advised to have a smear test and a colonoscopy.

But just two weeks later, she was given the crushing news she had stage three cervical cancer and told she needed a hysterectomy.

Jessica said: ‘After I gave birth I was still feeling really sick and had a really bad back, and had started bleeding.

‘I think I had experienced some symptoms while I was pregnant.

‘I’d been due a smear test, but didn’t have it because I was about to have a baby.

‘When doctors told me I had cancer it was terrible to find out, I really did think my life would be over.’ 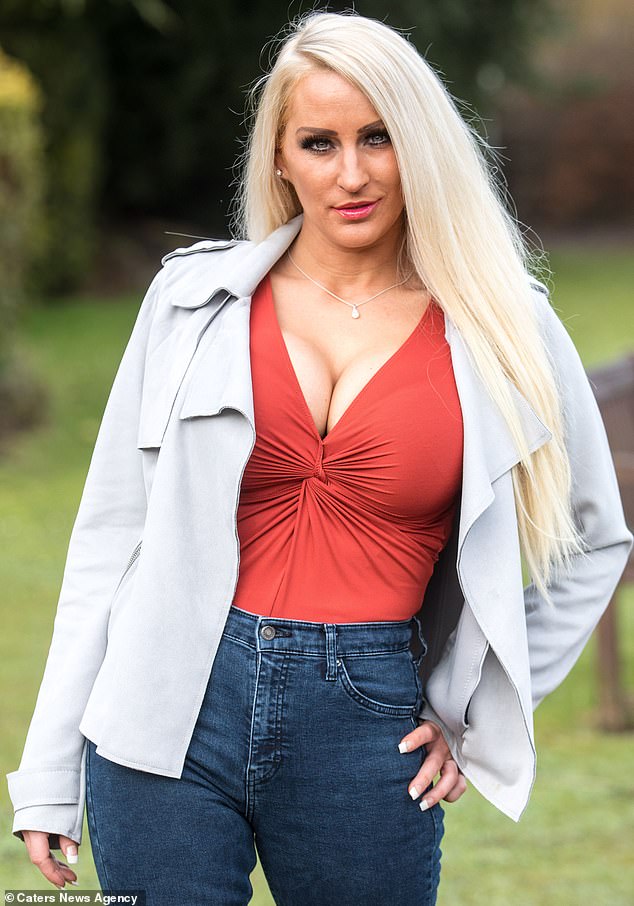 Jessica is calling on women to undertake cervical cancer smear tests promptly after putting hers off for 10 months. The 30-year-old was diagnosed with stage three cervical cancer and had a radical hysterectomy which removed her womb and fallopian tubes in September 2017 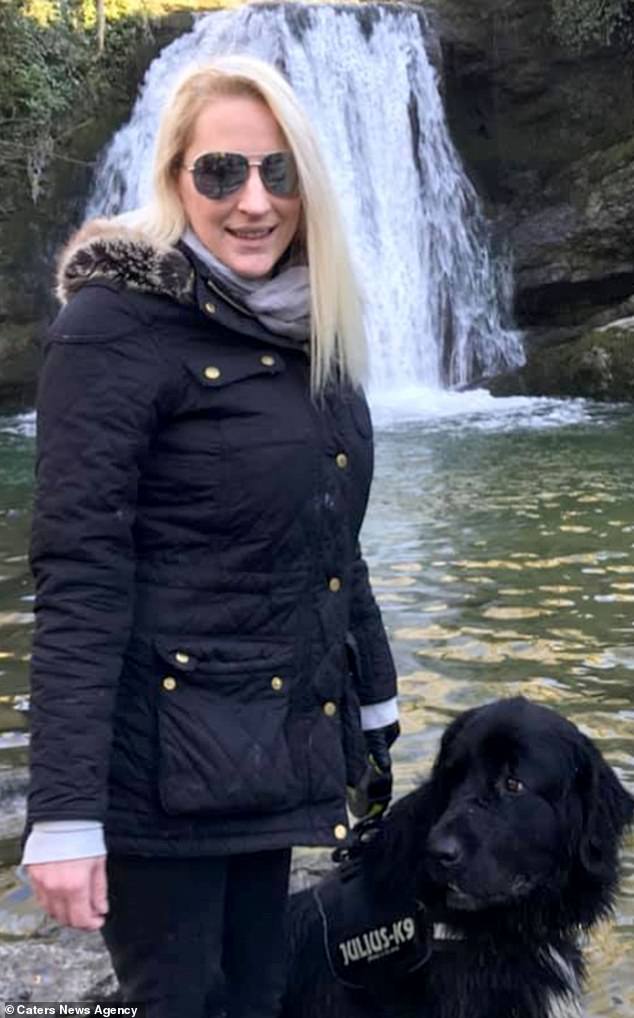 In June 2018 Jessica was given the devastating news that despite having a hysterectomy, doctors missed a tumour on her cervix. She had to have radiotherapy and was given the all clear late last year

After undergoing a radical hysterectomy which removed her womb and fallopian tubes in September 2017, Jessica said she still felt something wasn’t right.

She was still suffering from backache and feeling unwell and six weeks afterwards began to bleed and ended up in A&E.

Jessica was given a CT scan and emergency surgery but doctors still couldn’t find anything wrong with her.

But June 2018, she was given the devastating news that despite having a hysterectomy, doctors had missed a tumour on her cervix. 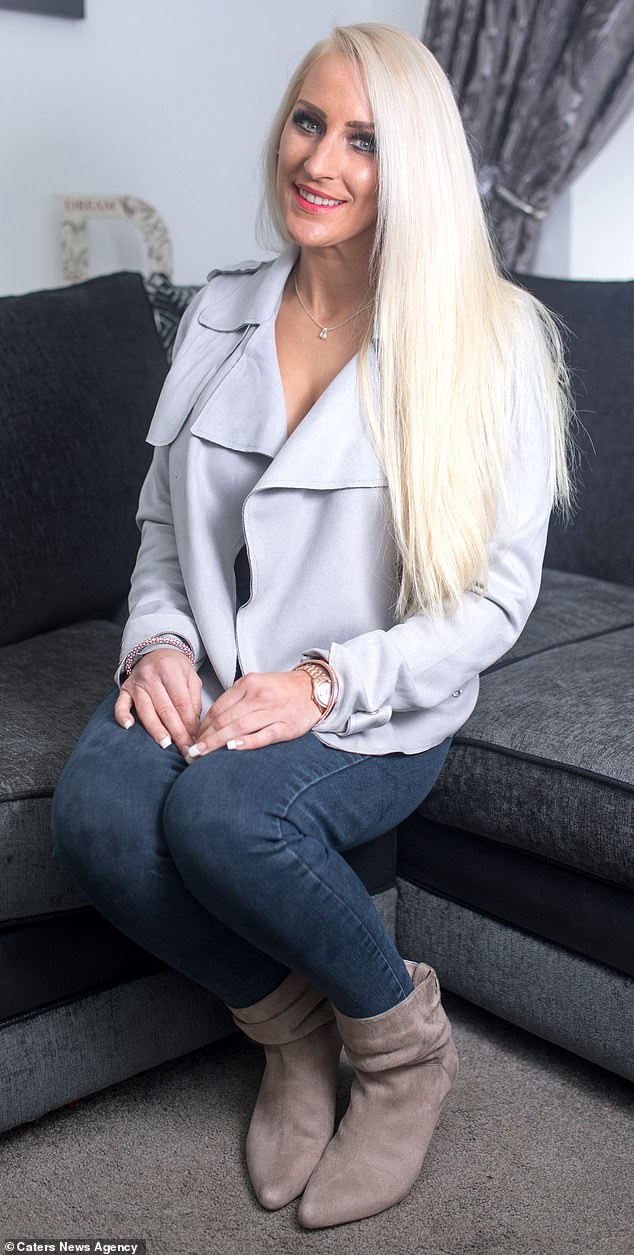 Jessica’s on-and-off relationship of three years ended due to the stress of her cancer diagnosis. Despite getting the all clear from the disease late last year, she is still too scared to regain her passionate former ways 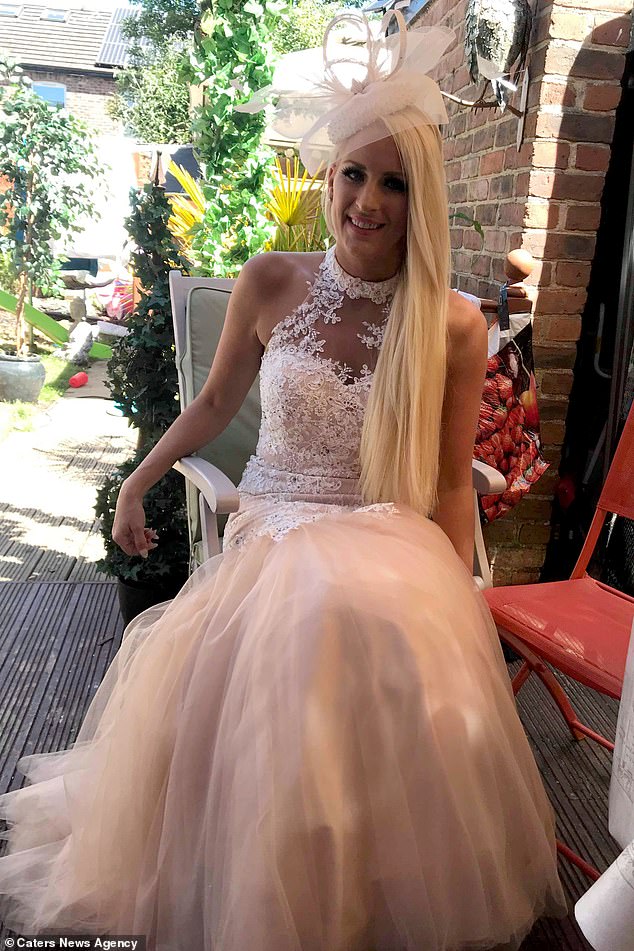 Jessica pictured wearing a dress her boyfriend had bought her for the races. She hoped her boyfriend would support her through her cancer diagnosis but the relationship broke down. The 30-year-old claims the cancer limited her love life and has not been intimate with anyone since her hysterectomy 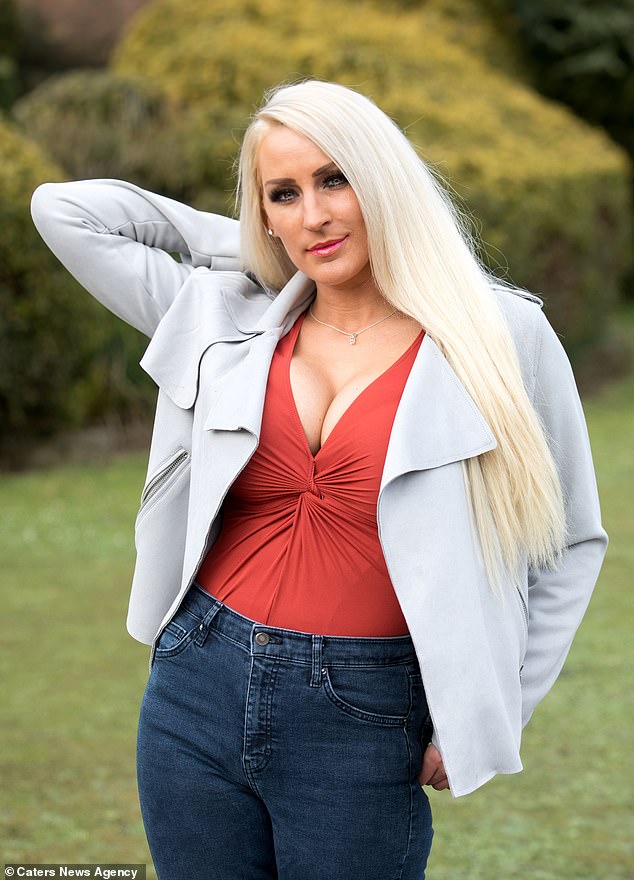 Jessica said: ‘A few weeks before, my boyfriend had bought me a really nice dress to go to the races in.

‘He had promised me the world and I thought he was going to support me again through this.

‘But when I went to his house and told him that they had found the cancer again, he looked at me and said he couldn’t do it anymore.

‘The cancer had meant we never had intercourse any more, as after I had my hysterectomy I’d read a lot of horror stories.

‘The fact I was going to have to have radiotherapy meant we couldn’t have sex.

‘He never said that directly, but I think that had something to do with it.

‘Initially, I was angry, but I don’t blame him anymore.’ 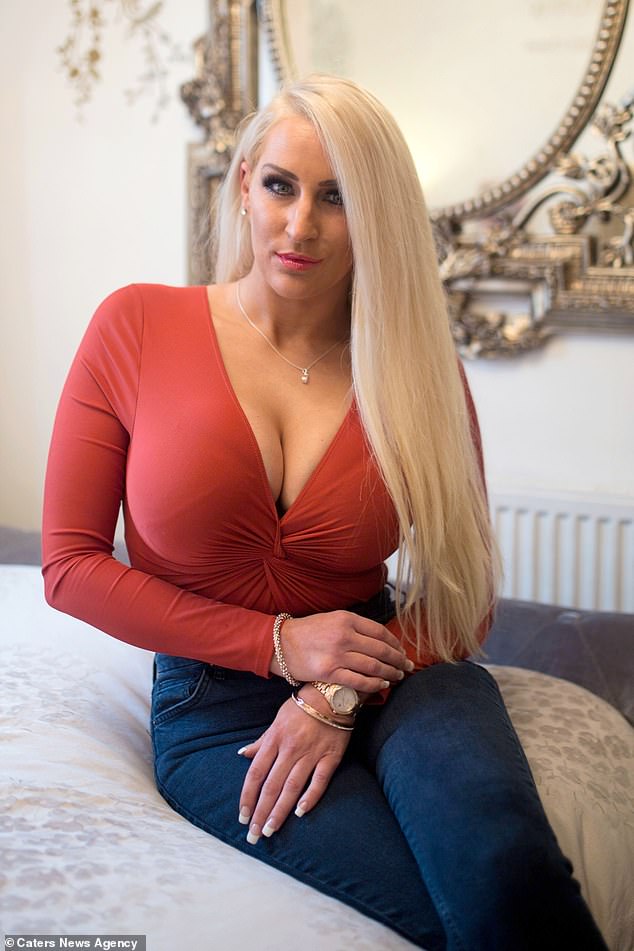 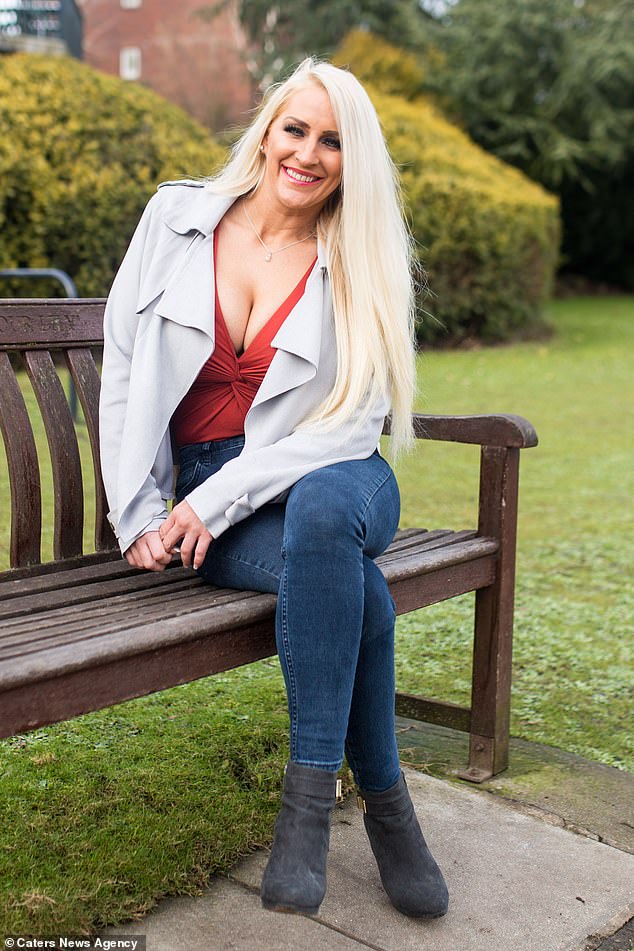 Jessica, who has been single for nine months, was given the all clear from cancer in October 2018.

She is determined to live her life to the full but hasn’t had sex since due to her fear of her the impact her hysterectomy could have had.

‘I’m still scared about having sex but I think it’s really important for other cancer patients to talk about this stuff – it shouldn’t be taboo.

‘I could be a single for a while, but I’m just happy to be alive.’

You are advised not to have sex for around four to six weeks after having a hysterectomy. This should allow time for scars to heal and any vaginal discharge or bleeding to stop.

Having the uterus removed can cause women to worry about losing their sexual attractiveness. Many women also talk about feelings of loss or sadness after a hysterectomy

Having a hysterectomy doesn’t mean you can’t have an orgasm. You still have your clitoris and labia, which are highly sensitive.

It’s not known what role the cervix plays in orgasm. Some experts have argued that removing the cervix can have an adverse effect, but others have found that it doesn’t.