Tara Costigan, 28, was fatally struck in the neck with an axe by Marcus Rappel

A mother who was killed by her axe-wielding ex-boyfriend tried to lodge a domestic violence order while in labour with their daughter eight days before she died.

Tara Costigan, 28, was fatally struck in the neck with an axe by Marcus Rappel, now 44, in the laundry room of her Canberra home while shielding their newborn daughter.

Rappel was sentenced to 32 years and two months jail, with a non-parole period of 26 years, for murder, breaching a domestic violence order and two counts of assault.

It has now been revealed that the mother-of-three went to her local police station to file a domestic violence order eight days before her 2015 death in a desperate bid to protect herself and her children.

In her application for the order, Ms Costigan wrote that she ‘could not fill out the paper work because I was in labour,’ the Daily Telegraph reported. 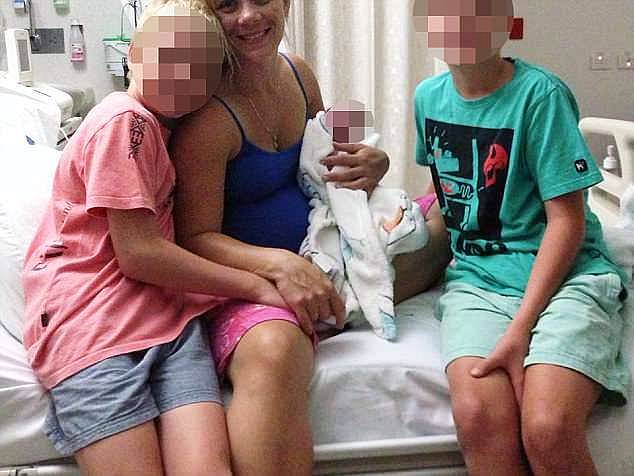 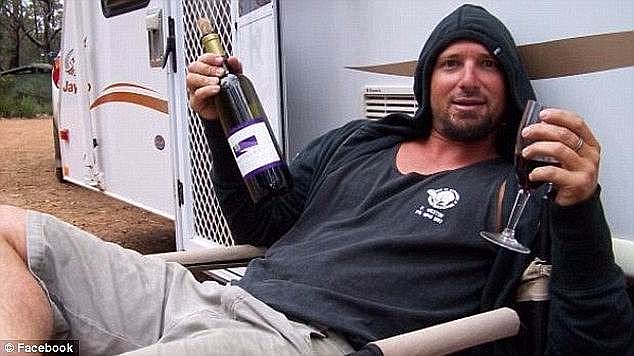 Marcus Rappel (pictured) murdered mother of three Tara Costigan, 28, in February 2015 in front of her sons, aged nine and 11

The mother-of-three detailed the moment she told the bricklayer of their daughter Ayla’s birth.

She said he stormed into the hospital with his mother.

‘He was very angry and said to me ‘I know about the other men’. He stayed no more than 10 min – he stormed out and left,’ she said.

Rappel told Ms Costigan that he was ‘still using ice’ in an emotional conversation on February 22, but things turned sour two days later when they met at a cafe. 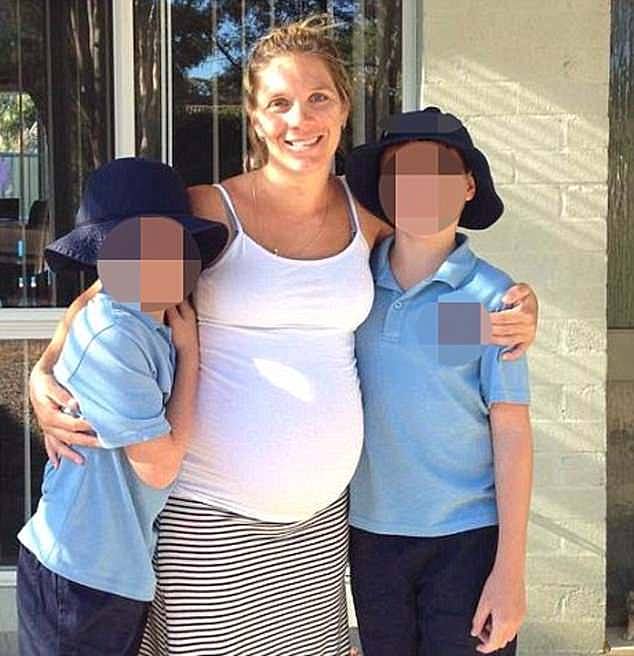 Ms Costigan was breastfeeding her newborn daughter when Rappel broke in to her Canberra home. She fled to the laundry room in terror – before he struck her in the neck with an axe

‘I could tell Marcus was in a bad mood’, she said, before explaining that she left the cafe when he became verbally abusive.

He killed her in front of her two sons – age nine and 11 at the time – her sister, and her sister’s partner.

Ms Costigan’s family said they are still dealing with the the impact of her death.

‘I think the biggest impact is the loss of family, because Tara was a very big part of my life from the moment she was born,’ her grandmother Margaret Costigan, 82, said.

The harrowing triple-0 call Ms Costigan’s sister Rikki Schmidt made was played in the ACT Supreme Court in July, 2016.

Ms Schmidt could be heard pleading the operator to hurry up when he asked what had happened.

‘My sister’s ex-boyfriend came into the house with an axe.’

When the operator asked for more details about her injuries, Ms Schmidt frantically screamed: ‘She’s got an axe wound on her neck.’

He again asked for more details, to which she said: ‘No I don’t she’s hardly breathing,’ audio played by ABC revealed.

‘She’s going to die, can you please hurry up.’

Family at the home at the time of the attack held a towel to her neck in an attempt to stem the bleeding.

Ms Costigan’s aunt, Maria Costigan, cried as the audio recording played in court on Tuesday, while Rappel appeared to cry with his head between his knees.

Her now teenage sons now live with their biological father and Ayla has been informally adopted by her aunt and uncle on her father’s side.

‘[Ayla] bounces off walls, runs around everywhere with her head forward. It’s incredible how much she is like her mum when she was only with her mum for eight days,’ Tara’s aunt Maria Costigan, 57, told the publication.

During Rappel’s sentencing hearing in September 2016, the court heard that the estranged pair’s relationship had broken down and Rappel had become increasingly abusive. 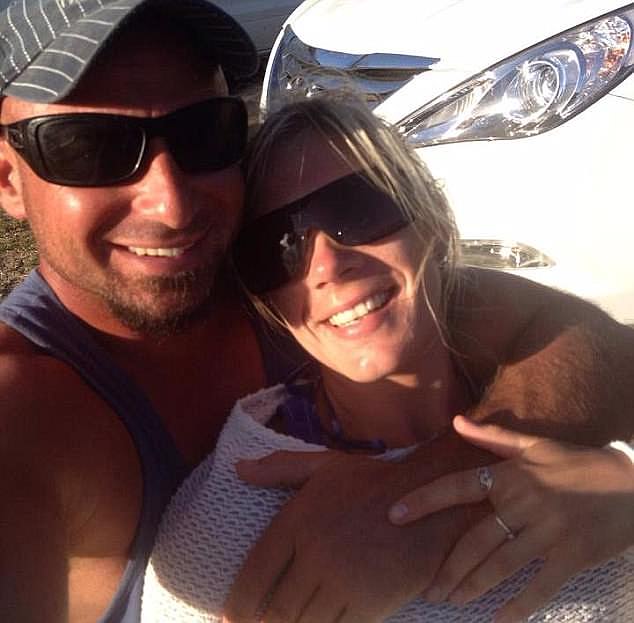 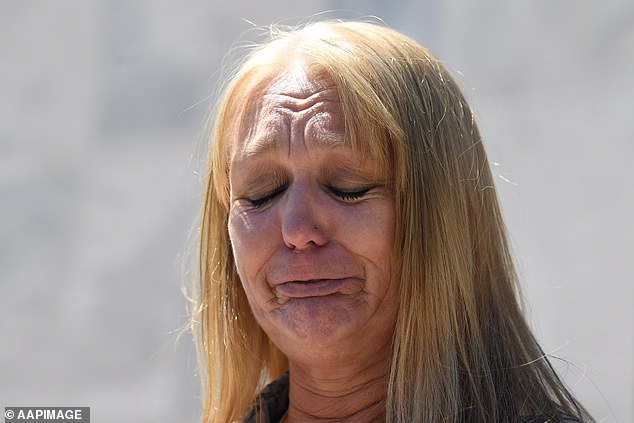 ‘(It) should have been forever,’ Ms Costigan’s mother Trish Fuller (pictured) was emotional outside of court after the sentencing

The love was gone, the trust was gone, the family was against me for things I didn’t do,’ Rappel said in his evidence. ‘It was doomed.’

Angered at not being present for his daughter’s birth and intent on reclaiming furniture which belonged to him, he arrived at the Calwell home in a rage.

Ms Costigan was breastfeeding her newborn daughter when Rappel broke in. She fled in terror to the laundry but was not quick enough.

It was there that she was struck in the neck by Rappel, falling face-first to the ground while still holding her newborn daughter.

Ms Costigan’s sister Nikkie Schmidt and her partner were in the house at the time and both suffered injuries in the attack. 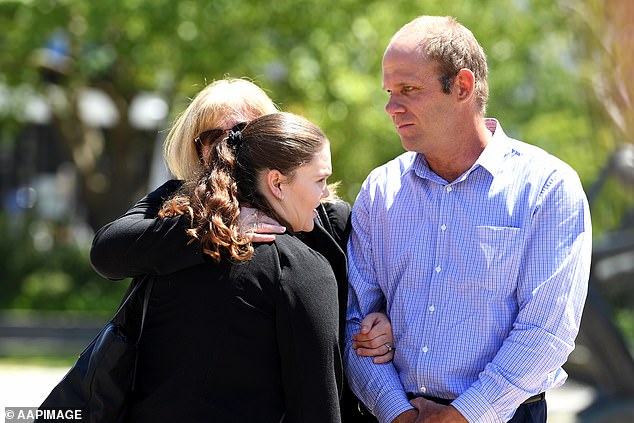 Rikki Schmidt, sister of domestic violence victim Tara Costigan is hugged by family members outside the Supreme Court after Rappel was sentenced

Ms Schmidt’s partner eventually managed to knock the axe from Mr Rappel’s hands and a neighbour was able to restrain him until police arrived.

Ms Costigan’s mother Trish Fuller said no sentence would have been good enough.

‘(It) should have been forever,’ she previously told reporters outside of court amidst sobbing tears.

‘Whatever he did is never going to bring her back, this has just been devastating.’

Ms Costigan’s uncle Michael said Rappel, 42, got what he deserved.

‘Many have suggested that today will bring closure. It hasn’t – today’s verdict does not bring me peace. Tara remains dead,’ he told reporters outside court. 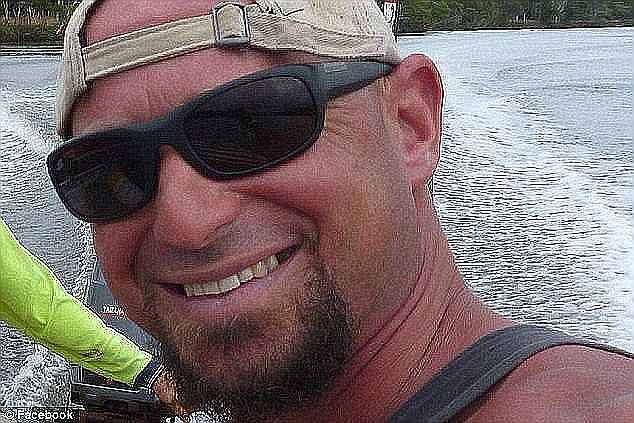 In 2018, Rapell (pictured) was beaten at the Alexander Maconochie Centre in Canberra

Justice Burns told Rappel the ruthless murder was ‘vicious and cowardly’ and would be ‘felt for decades to come’, the ABC reported.

Those who witnessed your violence will have to live with their memories for the rest of their lives,’ he said.

‘Your actions deprived three children of their mother, including your own infant daughter.

In 2018, Rapell was beaten at the Alexander Maconochie Centre in Canberra.

The murderer was left with facial bruising but did not need hospital after the attack at 6pm on April 19.

He will be eligible for release in 2041.