Mumps has broken out at a Texas jail, sickening 11 prisoners and three medical staff members who have been restricted to isolation, officials said Thursday.

Meanwhile, a total of about 300 other inmates that may have come into contact with the infected prisoners have been quarantined, the Harris County Sheriff’s Office said during a press conference, Houston Public Media reported.

Harris County Jail is the second corrections facility in the US this week to report an outbreak of mumps, a highly contagious viral infection.

Like measles – which has struck over 1,000 Americans so far this year – the virus is preventable with the MMR shot, but immunization rates have fallen in recent years amid anti-vaxxer sentiments in the US.

Harrison County Jail’s outbreak began in May, when one inmate started to show symptoms, which may include fever, head and muscle aches, fatigue, low appetite, and, most obviously, often lop-sided swelling of the cheeks or jaw.

Mumps typically looks like a cold and clears up within a few weeks, but in some adults it can cause lasting complications.

Men’s testicles may become inflamed, and then shrink in the long-term.

The infection can also lead to inflammation of the ovaries and breast tissue in women and of the pancreas brain or spinal cord in either sex.

Occasionally, people who have had mumps go deaf.

Although the measles, mumps and rubella vaccine protects against the disease, the US still sees more annual cases of mumps – a less serious illness – than it does of measles.

That’s far less than the 186,000 annual cases that predated the 1967 of the first mumps vaccine, but ‘mumps is still around,’ as the Centers for Disease Control and Prevention.

In 2019, Texas, where the afflicted county jail is located, has one of the highest case-counts in the nation.

Usually, mumps is transmitted from person to person through saliva, drifting through the air in tiny particles of spit from a cough or sneeze and inhaled by the next person.

‘As with any infectious disease investigation, we are looking at the individual cases to identify possible contacts to ensure sure proper action is taken as needed to prevent this disease from spreading further,’ said Dr David Persse, physician director for the city of Houston, Texas. 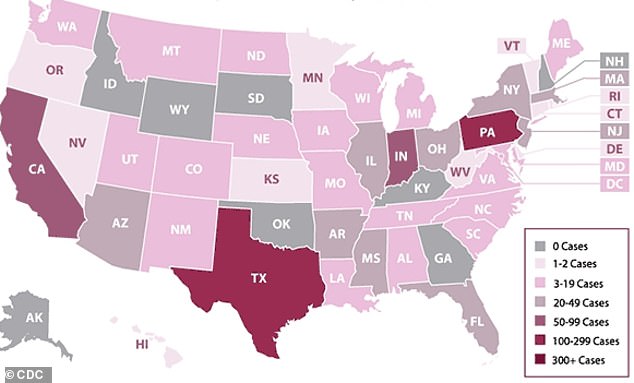 mumps cases have been reported in most states in the US so far this year, but Texas and Pennsylvania have the highest number of cases (dark red), a CDC map shows

‘Given the inherent nature of a facility like a jail, with lots of people in a relatively small space, it’s not uncommon to see infectious diseases spread in this manner.

‘We currently do not have reason to believe this outbreak has spread outside the jail.’

To ensure that the outbreak is contained, the Houston Health Department has been assisting the jail’s staff in isolating those who are infected, quarantining and administering booster MMR shots (which are typically given in the first year-and-a-half of a child’s life and then again between ages four and six).

‘This is yet another reminder about the importance of proper vaccination against vaccine preventable diseases like mumps,’ said Dr Persse.