A sleep-deprived mother has been left at her wits end after putting up with three years of disturbed nights, thanks to her neighbours’ screaming five-year-old.

The woman turned to Mumsnet for advice explaining that they boy would scream for up to two hours at night after being put to bed and them start yelling again after midnight.

She and her partner had tried to resolve matters by going next door with a bottle of wine to ask if they could talk about possible solutions, such as soundproofing his bedroom.

However, the neighbours became defensive and insisted that all children make noise.

Some posters have no sympathy for the woman’s dilemma, suggesting that the child must have some form of special needs and said that his parents must be finding it equally difficult.

And the woman’s admission that one night she’d opened the window and shouted at the boy to ‘shut up’ after 20 minutes of screaming outraged some commenters, who advised her to stop complaining and move house.

However, many were sympathetic to her plight and even suggested that she should contact the police and social services.

A woman hasn’t slept properly for three years, thanks to her neighbours’ five-year-old son screaming throughout the night (stock image) 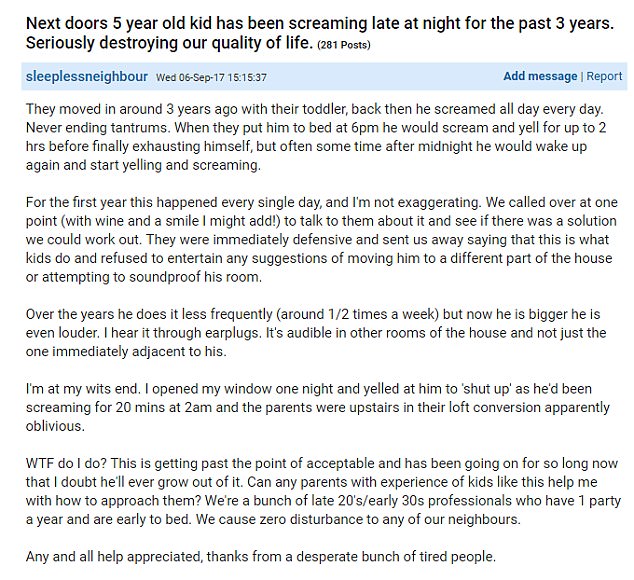 The poster explained that the neighbours have converted their loft and that she suspects they sleep soundly up there throughout the night and can’t hear the racket their son is making.

Commenters pointed out that if the child has special needs, the parents would probably have mentioned it when she went to see them, and urged people to be more sympathetic to her plight.

One woman pointed out that sleep deprivation can have serious consequences and said that the woman is entitled to enjoy peace in her own home, regardless of what the neighbours are going through.

And they rounded on those that suggested she should have to move out of her own home as a solution to the problem. 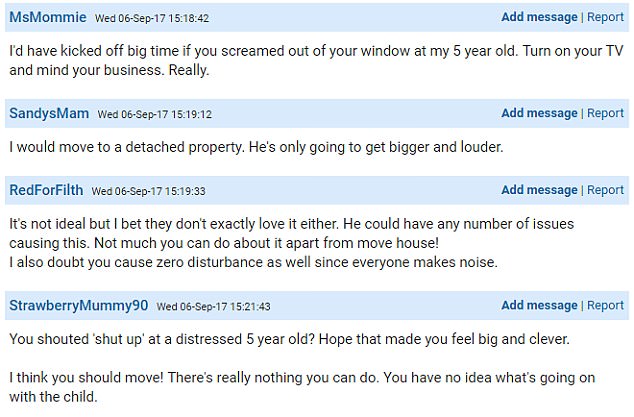 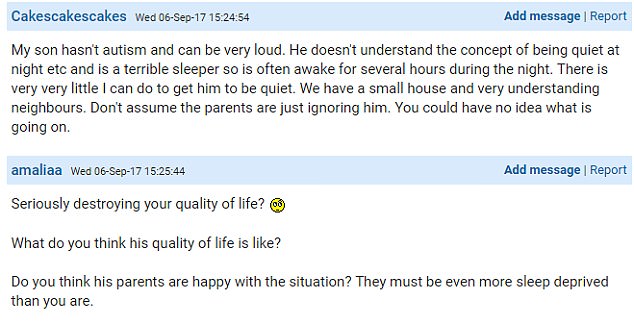 Outraged commenters took issue with the woman’s complaint, saying that they feel sorry for the parents

Many posters suggested calling social services, saying that it’s not right for a five-year-old to be screaming for hours

A woman pointed out that the parents had the opportunity to explain if their child has special needs, but they simply gave the neighbour a short shrift 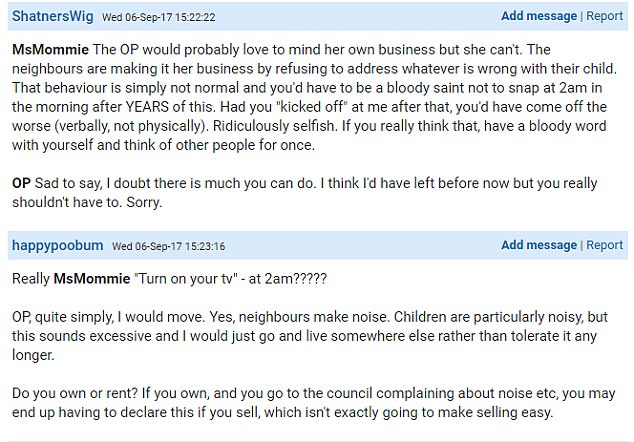