And you thought YOUR job was bad! Employees reveal their most shocking workplace tales – from romps caught on camera to a boss who showed off an ‘intimate piercing’

By Maisie Bovingdon For Mailonline

We’ve all come across some amusing situations in the workplace, but the hair-raising tales of what some employees have been through will make you wonder why they didn’t just resign on the spot.

British workers have been sharing their most outrageous tales in a Mumsnet thread, including one who received see-through lingerie from their boss as a Christmas gift.

The thread was started by a user who asked for ‘work horror stories in the hopes of giving us all a few laughs’, and led to shocking tales, including office romps and scandals, to inappropriate gifts and seeking revenge on bosses.

Mumsnet user invited fellow users to share their worst work experiences on the thread, and the post attracted a whole host of shocking stories (stock image)

A user described a rather awkward moment in a new job, saying: ‘One boss on my first day, while sitting on my desk explaining part of the job to me, farted rather loudly.

‘We both just carried on talking as if nothing has happened and neither if us ever mentioned it. Barbara, if you’re reading this, I’m still laughing.’

Another had a less amusing memory to share, saying: ‘My boss when I was in my early 20’s was more than twice my age.

‘One Christmas he bought me see-through underwear. Going back to work after Christmas was slightly awkward, I never questioned why he thought that was appropriate.’

One worker recalled a time when their manager’s ex-girlfriend sought revenge by posting nude pictures of him around the office.

They wrote: ‘Very suave, rather smug boss dumped his girlfriend who worked there too. She posted nude pics of him on noticeboard (this was pre-internet) as revenge, then resigned .

‘We identified him by his Italian handmade shoes: which he had a well known penchant for: They were all he had on.’

It seems that romance in the workplace often comes to a bad end, with one woman recalling how a secretary enjoyed a steamy sex session with a colleague in the conference room – only for it to be caught on camera.

‘Both got blotto and she booked a meeting room for a romp. Being new she didn’t know all meeting rooms have CCTV routinely spot-checked by security. She got sack, guy didn’t.’ 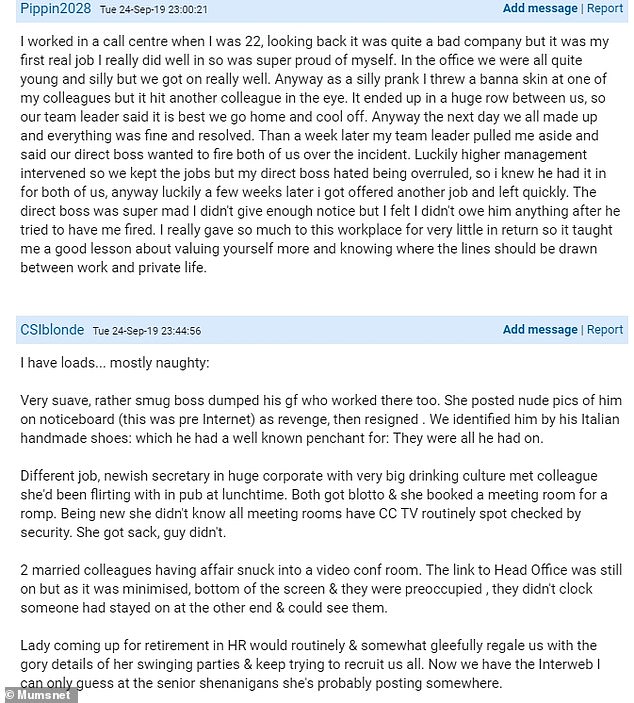 Another frisky couple had their intimate rendezvous revealed on a video call, when they crept into a video conference room, not realising the link to Head Office was still live.

Meanwhile, one manager was fired for showing her team her intimate body piercing, while a team leader in the civil service also revealed a bit too much.

She used to get so drunk in the evenings she’d fall asleep in front of the fire and get heat welts on her thighs,’ her former colleague explained. ‘She wore stockings and would show the men at work her marks and the stocking tops too.’ 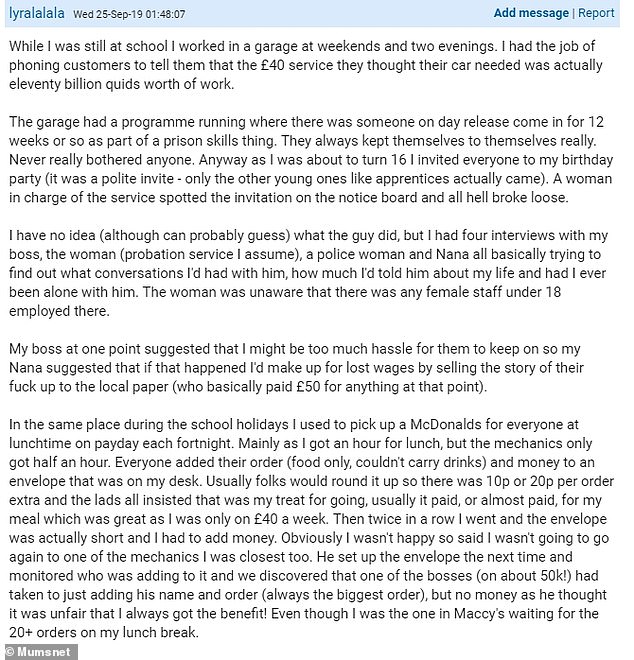 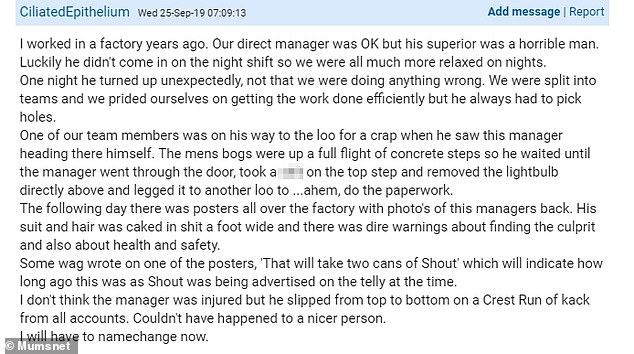 Another recalled: ‘I worked in a large government department and a disgruntled employee – around the time of the annual performance reviews – broke every hot faucet lever on each of the kitchenettes . No-one could have tea or coffee for weeks while they ordered in replacement lever parts.

‘At this same department someone s*** in the communal showers.

‘At this same department HR had to send out a building message to inform staff that – no, it was not appropriate to walk naked on the lower ground floors between the showers and change rooms, and could all those showering downstairs please cover up.’ 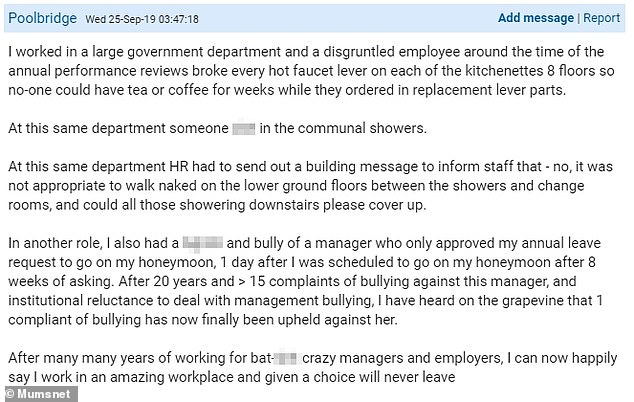