‘Murdered’ beautician, 32, told boyfriend she had £1,200-a-week sugar-daddy before he stabbed her

A beautician told her cage fighter boyfriend that she received weekly £1,200 payments from a sugar daddy just days before he allegedly stabbed her to death in a ‘prolonged, remorseless attack’.

Andrew Wadsworth, 37, stabbed Melissa Belshaw, 32, to death in the front bedroom of her home in Billinge, Wigan, on the afternoon of May 20, Manchester Crown Court has heard.

The ex-professional mixed martial arts fighter claims he lost his temper and stabbed her within a minute of what he said were ‘shock’ disclosures from her about her sex life, and a set-up arranged by her in which he was robbed and injured.

Wadsworth starting dating Ms Belshaw in March 2018 after he had been released from jail on licence the previous November.

Melissa Belshaw, 32, (pictured) told her boyfriend she had previously had a £1,200-a-week sugar-daddy

He had been convicted in 2011 for robbery, possessing a firearm with intent to cause fear or violence, aggravated burglary and causing grievous bodily harm with intent.

He was recalled to prison in January 2019 after a positive drugs test for cocaine and then released again on March 4 this year after a parole hearing, Manchester Crown Court heard.

On Friday, a series of text message exchanges between the pair were read to the court.

In September 2019, Wadsworth accused Ms Belshaw of cheating on him.

In one message he wrote: ‘You are a prostitute, you know you are. You have f***** loads of people.’

Ms Belshaw denied his allegations and continued to do so when he made the same claims again following his release from prison this year.

Andrew Wadsworth, 37, (pictured) stabbed Ms Belshaw to death in a ‘prolonged, remorseless attack’ in the front bedroom of her home in Billinge, Wigan

‘I met him in March. He sends me money every Monday, well used to. I would be seeing him two hours a week. There is no-one else, that’s the truth.’

Ms Belshaw, who was planning to open a beauty salon, went on: ‘There are no more secrets. Now I have a shop. My shop has cost me 7K. I met him years ago in Marbella. You don’t know him. He is 40, he is from Liverpool. Two hours every Monday and I hardly sh***** him.

‘I did what I had to do change life. Let’s leave it at that. Now I have everything I wanted, a shop.’

Wadsworth wrote: ‘You definitely f***** him when we were together. I can’t get over that.’

Ms Belshaw replied: ‘No, you think that. I will do a lie detector, I promise you.’

In response, Wadsworth said: ‘No-one has ever done such a horrible f***** up thing to me.’

Mr Belshaw said: ‘I was going down a bad, bad path. My life was hell, I lost you.’

On May 17, Ms Belshaw denied claims from Wadsworth that she had sex with people he knew in Wigan and on May 19 angrily denied his assertion she had slept with a relative.

Forensic officers at the home of Ms Belshaw, where she was found dead by police after the attack on May 20

On May 17, Ms Belshaw denied claims from Wadsworth that she had sex with people he knew in Wigan and on May 19 angrily denied his assertion she had slept with a relative.

The jury was also told about two incidents when Wadsworth and Ms Belshaw lived together at an address in Moor Road, Orrell.

Police checked their property in September 2018 after Wadsworth thought there was an intruder in the house.

It was noted that Wadsworth had mental health problems and was medicating with anti-psychotic drugs but had not taken them on a recent holiday with Ms Belshaw.

In October 2018, police were called to a chip shop in Church Street, Orrell, after Wadsworth entered covered in blood. 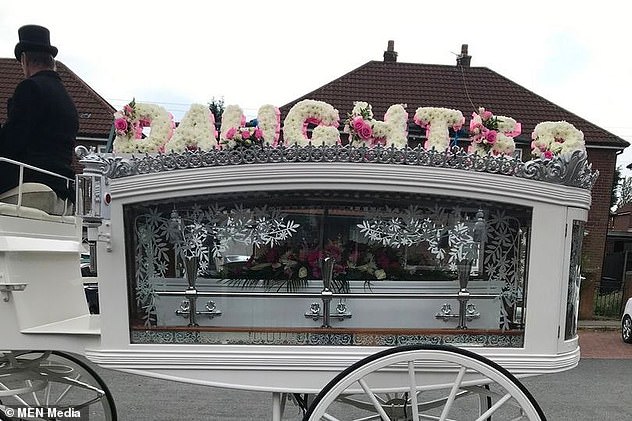 Officers found Wadsworth was ‘not coherent’ and ‘talking gibberish’ and he was taken to hospital for assessment.

Police searched his home and found blood stains in the bedroom and a blooded lock knife in the front garden.

Officers believed Wadsworth had jumped out of the bedroom window, the court heard.

Ms Belshaw said she had left the house earlier because Wadsworth was ‘acting strangely’.

Wadsworth denies murder and separate offences of attempting to murder a neighbour of Ms Belshaw and making a threat to kill against Ms Belshaw’s 13-year-old daughter.