Perhaps this one is called Grand Slam – it certainly looks like something’s been lobbed at the canvas with gusto.

Bold and athletic – just like his playing style – this striking painting is one of Sir Andy Murray’s efforts as an amateur artist. The two-time Wimbledon winner has picked up a brush while recovering from injury and served up some interesting results.

In a photo posted on social media, the 30-year-old wore a scarf as he held a palette and looked poised to make his first mark on a blank canvas.

The finished work, similar in technique to the abstract style of artist Jackson Pollock, features a black background splashed with red, pink, orange and white. Splodges of yellow give the impression of tennis balls.

The father of two – whose wife Kim Sears paints pet portraits – is due to make a comeback soon after hip surgery in January. While Murray may not be planning to sell any of his efforts, those by Pollock can fetch a fortune. Two by the abstract expressionist sold in 2016 for more than £350million.

The American pioneer developed the style known as action painting, dripping paint on to large canvases on the floor. Although he died in 1956, his work continues to inspire others to experiment.

You can’t seriously compare it to a Pollock or a Kandinsky, but Andy Murray is certainly making a different kind of contemporary art. 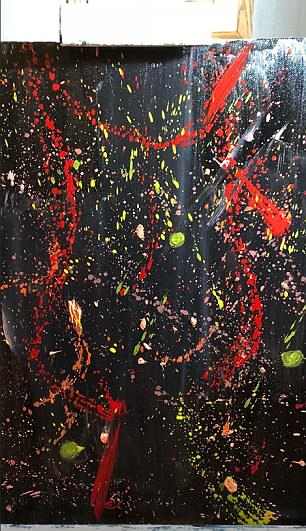 However crude, it’s joyful and there’s a strong, athletic abstract resemblance to a match – with the ball being shot from the background to the foreground.

It almost looks to me like he’s used the ball as a paint brush. It’s very vibrant, very energetic, very different. He was probably covered in paint by the end. Is it a piece of performance art? I tried to see if I could see the scuff of the ball and the heel of his shoe in the paint.

It could even be seen as a self-portrait in an abstract way because it represents him, the tennis player.

I could almost see him with racquet in one hand and his tennis ball covered in paint in the other, whacking a ball against the canvas. But we’ve got to be a little bit tongue-in-cheek. I wouldn’t imagine that he’s saying, ‘I’m an artist’. But perhaps his wife Kim Sears, who is a fantastic dog portraitist, has had a great influence on him.

If Pollock had picked up a tennis racquet we wouldn’t have said he’s going to win Wimbledon tomorrow. Maybe Andy was getting some aggression out, maybe he wanted to burn off some energy. I think he was just having a bit of fun. Let’s just hope he had plenty of plastic around him.