Art historian Alice Procter, 23, who runs the tours, claims artefacts at the British Museum and the Victoria & Albert fell into British hands through ‘slavery’ and ‘looting’

Britain’s museums have traditionally offered visitors the chance to appreciate our national treasures in all their glory.

But sell-out tours of our biggest museums and galleries are now claiming that the artefacts represent ‘the history of empire and genocide’.

They brand Lord Nelson a ‘white supremacist’ and Elizabeth I a ‘slaver’.

Art historian Alice Procter, 23, who runs the tours, claims artefacts at institutions such as the British Museum and the Victoria & Albert fell into British hands through ‘slavery’ and ‘looting’.

Her website The Exhibitionist declares: ‘There are bloody handprints on the gallery walls, and the bodies of slaves and colonised peoples in the foundations.’ Guests on her £11 tours are also asked to wear badges saying ‘Display It Like You Stole It’. Australian Miss Procter has spoken on social media of needing to add more events after many sold out, with more than 300 tickets sold so far.

But this week London’s museums and galleries said they do not endorse the tours – while critics branded them ‘babyish and silly’.

Promotional artwork for the tours includes a portrait of Lord Nelson with the words ‘white supremacist’ in red across it. Similar works brand Queen Victoria a ‘thief’, Elizabeth I a ‘slaver’ and explorer Captain Cook an ‘invader’.

It comes after Historic England sparked outrage last week after tweeting a mocked-up photo of Nelson’s Column being destroyed by a wrecking ball.

Miss Procter attended the £19,260-a-year Latymer Upper School in west London before moving to the £37,740-a-year Westminster School, which counts Nick Clegg among its alumni. She is studying for a masters in material and visual culture at University College London.

Her tours of the British Museum highlight how the Gweagal shield was stolen from Aboriginals by Captain Cook, while her V&A tour shames displays of looted Abyssinian treasures, which are now subject to a restitution claim. The tour of the National Gallery focuses on John Julius Angerstein, principal underwriter at Lloyd’s from 1790 to 1796, whose collection she claims ‘forms the core of the National Gallery today’. Miss Procter told The Times Lloyd’s insured British slave ships, compensating merchants and captains for slaves dying at sea. 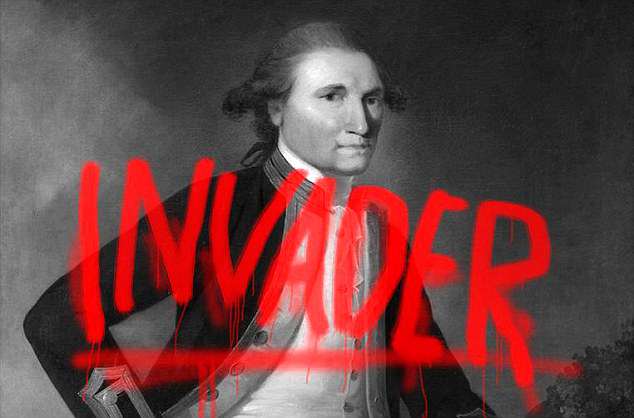 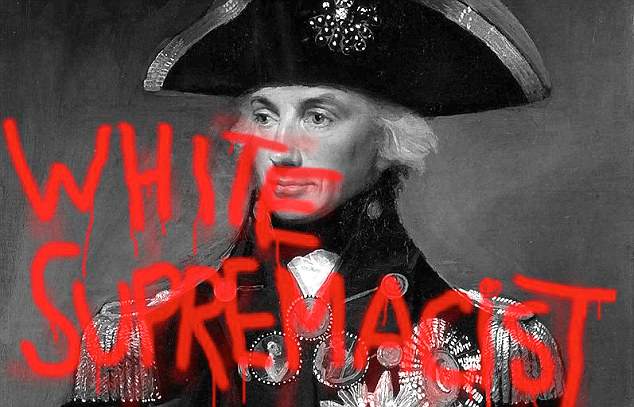 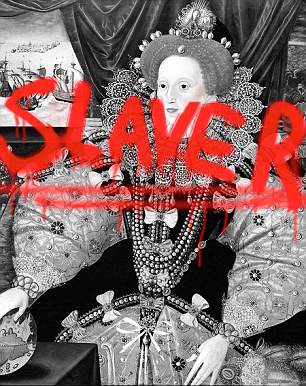 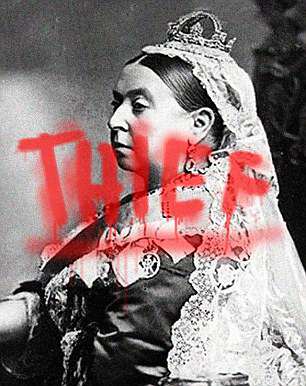 Promotional artwork for the tours includes a portrait of Lord Nelson (middle) with the words ‘white supremacist’ in red across it. Similar works brand Queen Victoria (bottom right) a ‘thief’, Elizabeth I (bottom left) a ‘slaver’ and explorer Captain Cook (top) an ‘invader’

An event description states: ‘In a country that’s repeatedly failed to come to terms with its colonial past … we seek to resist triumphalist nostalgia with art history. These tours focus on how major institutions like the National Gallery and Tate Britain came into being against a backdrop of imperialism.

‘We’ll unravel the role colonialism played in shaping and funding these collections, looking at the broader material history of celebrated works.’

But Tory MP and historian Kwasi Kwarteng slammed the tours as ‘sensationalist’. He said: ‘To put 20th-century terms such as white supremacist on 18th-century figures is not remotely scholarly. It’s babyish and silly … There needs to be a debate about our historical figures but calling them abusive names is not the way to do it. It needs to be put in its proper context.’

The National Gallery said: ‘These tours are not organised by, or with, the input of the National Gallery and nor do we endorse them.’ It highlighted Angerstein’s role in the abolitionist movement as a founding member of the Committee for the Relief of the Black Poor.

The British Museum stressed the tours ‘are run externally and do not form part of the British Museum’s public programme offer’. The Tate said it recently held an exhibition about art and the British empire, while the V&A said the museum’s ‘mission’ is to ‘encourage contemporary debate’ on historic collections. Miss Procter did not comment.