Former president of Pakistan Pervez Musharraf has been branded a fugitive during the trial of ex-prime minister Benazir Bhutto’s murder.

Ms Bhutto was assassinated in 2007, and then-president Musharraf was implicated in her killing, but resigned before fleeing the country to avoid trial.

Today, a court in Rawalpindi, Pakistan acquitted five men accused of being involved in the murder of Ms Bhutto – the first female prime minister of a Muslim country.

Runaway: Pakistan’s former president Pervez Musharraf was charged with Bhutto’s 2007 assassination in 2013, but is currently in self-imposed exile in Dubai

The men were accused of being Taliban militants involved in the conspiracy to kill Bhutto, but will now walk free.

The verdicts are the first to be issued since Ms Bhutto was killed in a gun and suicide bomb attack nearly a decade ago, an assassination which sparked street violence and plunged Pakistan into months of political turmoil.

Musharraf, a decorated ex-army chief and president from 2001-2008, is alleged to have been part of a broad conspiracy to have his political rival killed before elections. He has denied the allegation.

He was charged with murder, criminal conspiracy for murder, and facilitation for murder in 2013. This was an unprecedented move against an ex-army chief, challenging beliefs the military is immune from prosecution.

But he has been in self-imposed exile in Dubai ever since a travel ban was lifted three years later. 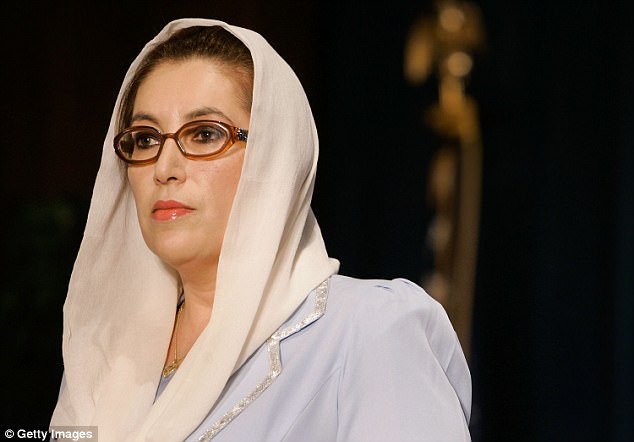 Icon: Benazir Bhutto  – the first female prime minister of a Muslim country – was assassinated in 2007, but no one has yet been convicted of her murder

BENAZIR BHUTTO: A LIFE OF TURBULENCE

Benazir Bhutto was killed little more than two months after returning from exile, in December 2007.

She was born in 1953, and went on to study at Harvard and Oxford University.

Her father, former premier Zulfiqar Ali Bhutto, was hanged in 1979 on the orders of military dictator Zia ul-Haq.

She headed to Britain after his death, maintaining a firm grip on the Pakistan People’s Party (PPP) from exile.

Bhutto returned to Pakistan, and after Zia’s death in 1988, Bhutto, then 35, became the first female prime minister of an Islamic country.

But observers said that, without full control over the civil and military establishments, she was never able to govern properly. She was elected twice and both times thrown out of office on corruption allegations.

Bhutto and her husband also faced a raft of corruption charges overseas, which they denied.

Bhutto went back into exile in 1999 when military leader Pervez Musharraf took over in a bloodless coup.

Her heralded return in 2007 was quickly marred by a suicide attack that killed 139 people.

Before she was killed, aged 54, Bhutto was hoping for a third term in power in 2008 elections.

Today’s ruling in court found that Musharraf has had ‘absconded’, a court official told reporters outside, saying it had also ordered the confiscation of his property.

The police officers – Saud Aziz, who was chief of Rawalpindi police at the time, and senior officer Khurram Shahzad – are now the only two people to have been convicted over Bhutto’s assassination.

Shahzad was accused of hosing down the crime scene less than two hours after the assassination took place, an act the United Nations described in a report into the assassination as ‘fundamentally inconsistent with Pakistani police practice’.

Aziz was accused of both giving Shahzad permission to hose down the scene, and of refusing to allow an autopsy of Bhutto’s body to go ahead.

Musharraf’s government blamed the assassination on Pakistani Taliban chief Baitullah Mehsud, who denied any involvement. He was killed in a US drone attack in 2009.

In 2010, the UN report accused Musharraf’s government of failing to give Bhutto adequate protection and said her death could have been prevented.