Muslim pupil, 11, threatens to BEHEAD his teacher in Germany

Muslim pupil, 11, threatens to BEHEAD his teacher in Germany: Boy had ‘declared it was okay to kill anyone who insulted the Prophet after minute’s silence was held for Samuel Paty’

An 11-year-old school pupil in Germany threatened to behead his teacher in a chilling echo of last month’s terror attack in France – a week after saying he approved of the Paris atrocity.

The boy made the violent threat in response to his teacher’s warning that there would be consequences if parents failed to attend a meeting with teachers.

The pupil, who is Muslim, had previously said after a minute’s silence for French school teacher Samuel Paty that ‘you’re allowed to kill someone who insults the Prophet, that’s OK’.

When the school’s headteacher called the boy’s parents to raise the alarm, his mother retorted that the family did not hold such extreme views so the child must have picked them up at school, according to Tagesspiegel.

The threat of violence at the Christian Morgenstern primary school in Spandau, a suburb of Berlin, came after the teacher had stressed the importance of a forthcoming parent’s evening.

She told her class that the meetings were vital because they would allow problems to be raised, adding that there could be consequences for those who refused to take part.

In response to this, the boy said: ‘If that happens because my parents didn’t show up, then I’ll do the same to you as that boy did to the teacher in Paris’.

The boy was referring to 18-year-old Abdoulakh Anzorov, the Chechen extremist who beheaded Paty in the Paris suburbs on October 16.

Paty was targeted after showing controversial cartoons of the Prophet Mohammed to his class during a lesson on free speech, drawing anger from Muslim parents.

French president Emmanuel hailed Paty as a ‘quiet hero’ and paid tribute to France’s teachers while vowing to defend freedom of expression.

That has made him the target of anger from around the Muslim world, where Macron’s image has been burned in effigy during angry protests. 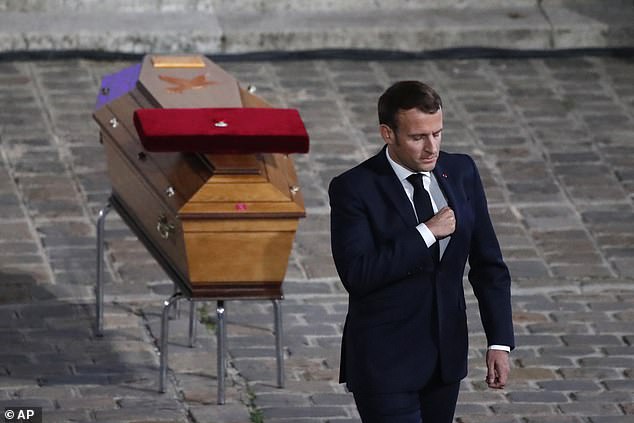 When the Berlin school held a minute’s silence for Paty, the same pupil who made the beheading threat responded by defending the killer’s actions.

After that incident, he was spoken to by an imam who was taking part in the minute’s silence and who told him that killing people could not be justified.

Following the beheading threat, headteacher Karina Jehniche phoned the boy’s mother to arrange for the boy to be picked up and a meeting to take place.

‘But the mother told me on the phone that he must have picked this up at school, because she and her husband didn’t think that way,’ the headteacher said.

Pupils in the boy’s class were shocked by his behaviour, she said.

‘They are defamatory comments that are completely unacceptable, particularly against the backdrop of the horrific murder of the French teacher Samuel Paty by an Islamist fanatic,’ Merkel’s spokesman Steffen Seibert said.