Muslims around the world celebrate Eid under lockdown restrictions

Muslims around the world on Sunday began celebrating Eid al-Fitr, a normally festive holiday marking the end of the fasting month of Ramadan, with millions under strict stay-at-home orders and many fearing renewed coronavirus outbreaks.

The three-day holiday is usually a time of travel, family get-togethers and lavish daytime feasts after weeks of dawn-to-dusk fasting. But this year many can only celebrate at home with immediate family, with virus fears dampening the holiday spirit.

Indonesia, the world’s largest Muslim-majority nation, has reported nearly 22,000 infections and 1,350 fatalities, the most in Southeast Asia. Lockdown orders intended to contain the pandemic mean there will be no congregational prayers at mosques or even open fields, no family reunions, no relatives bearing gifts for children.

‘This outbreak is not just dampening spirits of Eid, but also has made the tradition entirely different,’ said Andieka Rabbani, a university student in Jakarta. This year, like many Indonesians, he will only see family and friends through video calls.

A church in Berlin has also opened its doors for the muslim holy event, as worshippers have not been able to fit into mosques under social distancing rules.

The festival is usually a time for feasts, travelling and getting together with family. This year, however, it has been changed due to social distancing rules. Pictured: Worshippers in The Grand Mosue of Durres, Tirana, Albania 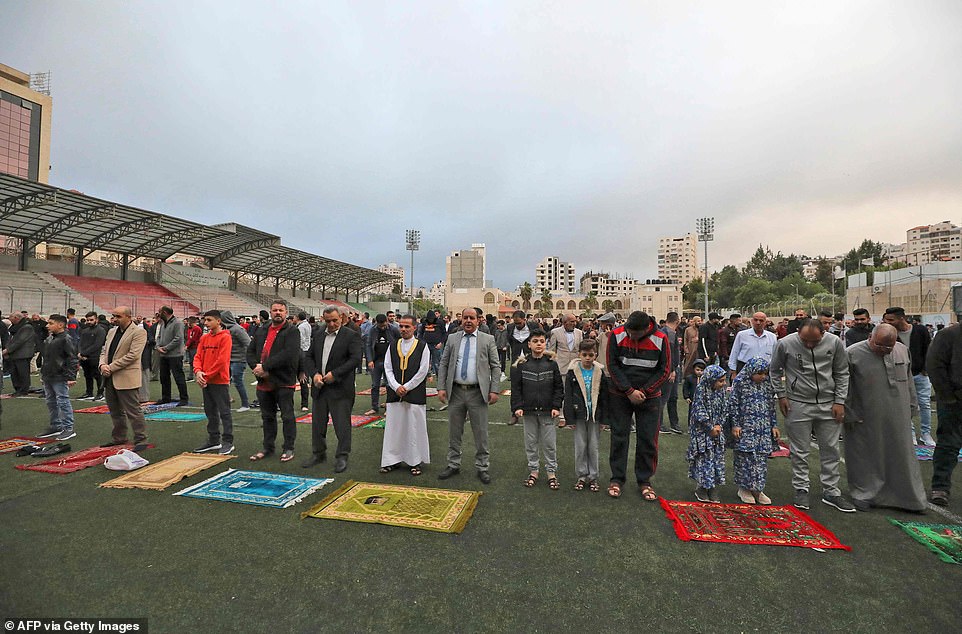 Prayers have been carried out while observing social distancing in many countries. Pictured above are worshippers at the Hussein Bin Ali Stadium in Hebron, West Bank 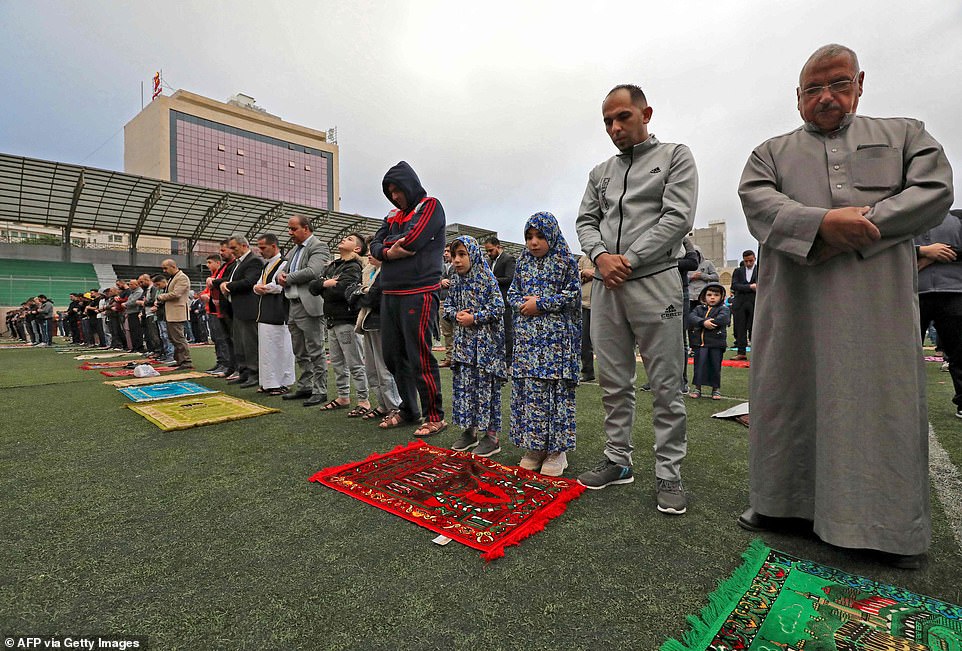 Worshippers gather for the festival at the Hussein Bin Ali Stadium in Hebron, West Bank, and stand close together 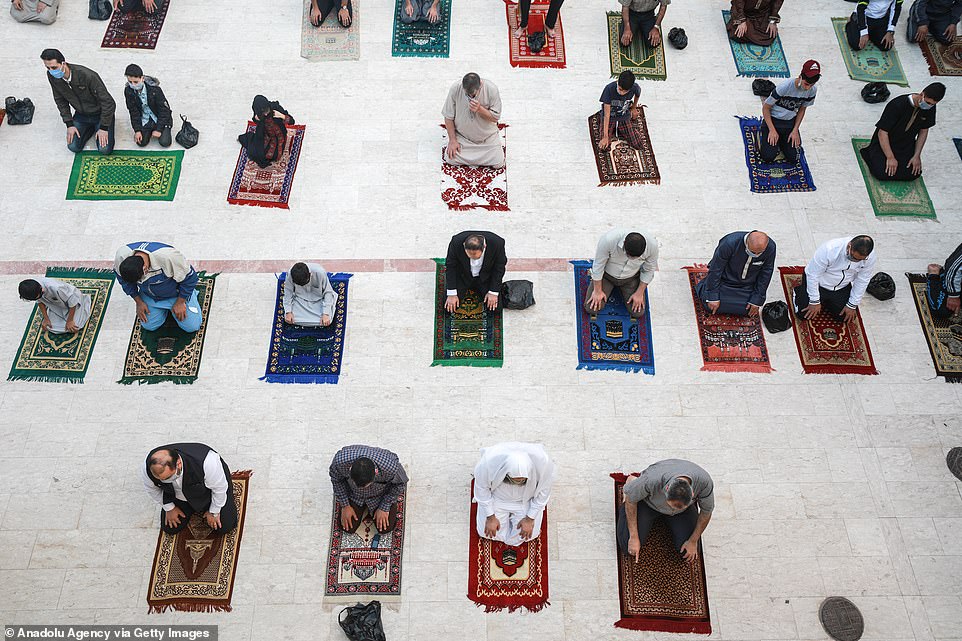 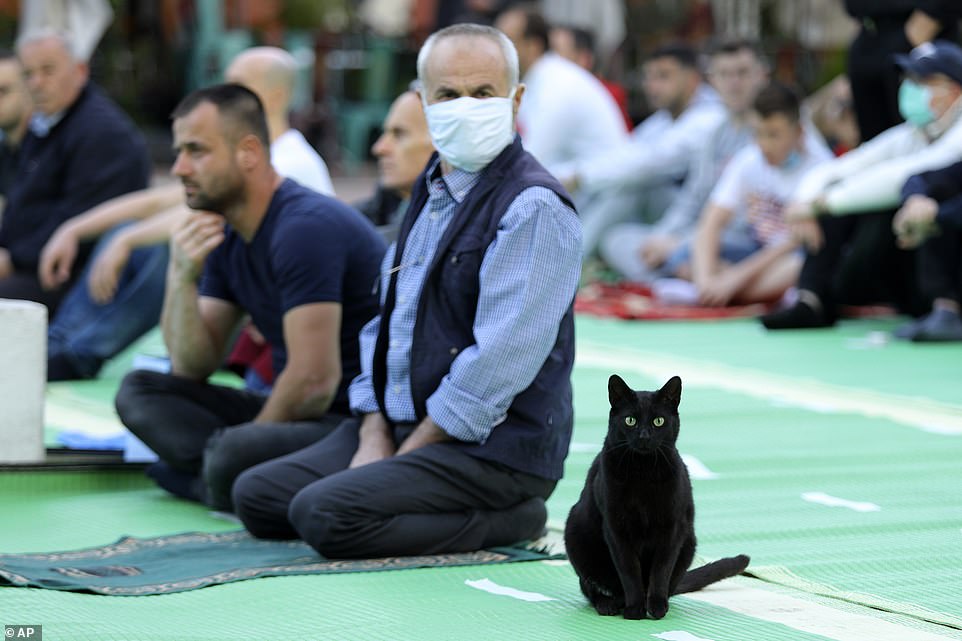 A black cat decided it would be prudent to join the many worshippers in Tirana, Albania, this morning

In deeply conservative Aceh, Indonesia’s only province enforcing Islamic law, public Eid prayers can still be performed at mosques and fields, but without shaking hands and with shortened sermons. An annual parade of decorated vehicles with loudspeakers invoking God’s name was scrapped this year.

‘It’s too sad … the whole week used to be one long festival, but not this time,’ said Muchtar Yusuf, an Aceh resident.

The province has reported zero coronavirus cases in the past weeks and has had only one death and 19 confirmed infections. In the rest of Indonesia, authorities have extended virus restrictions to June 4, suspending communal gatherings and banning private cars from leaving the capital, Jakarta.

The virus causes mild to moderate flu-like symptoms in most patients, who recover within two to three weeks. But it is highly contagious and can cause severe illness or death, particularly in older patients or those with underlying health conditions.

Eid celebrations also were low-key in neighboring Muslim-majority Malaysia. Businesses have mostly reopened after weeks of lockdown, but mass gatherings are still banned and ethnic Malay Muslims are not allowed to travel back to their villages.

Police have turned away more than 5,000 cars trying to head back to their hometowns in the last few days and have warned of strict penalties for those who try to evade authorities. 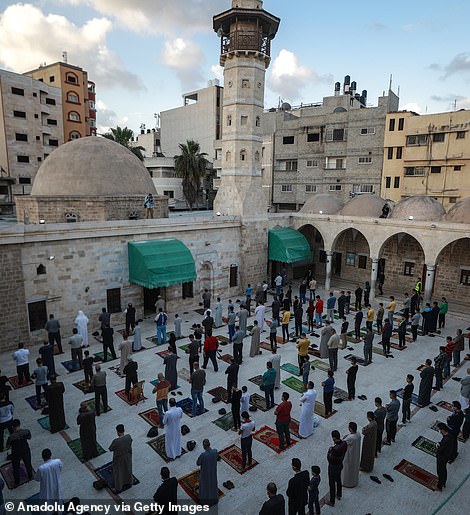 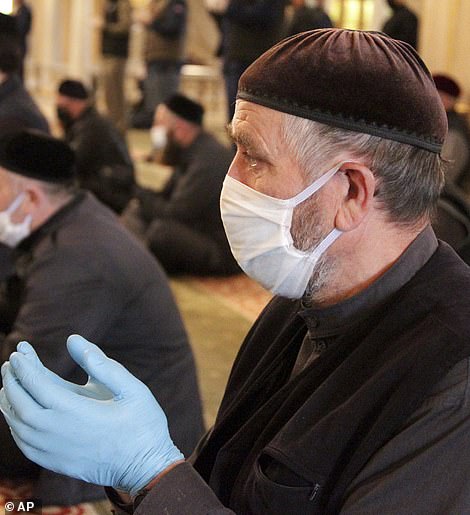 Worshippers gather at a mosque in Gaza city, left, and a man kneels wearing a face mask and gloves in Grozny, Russia 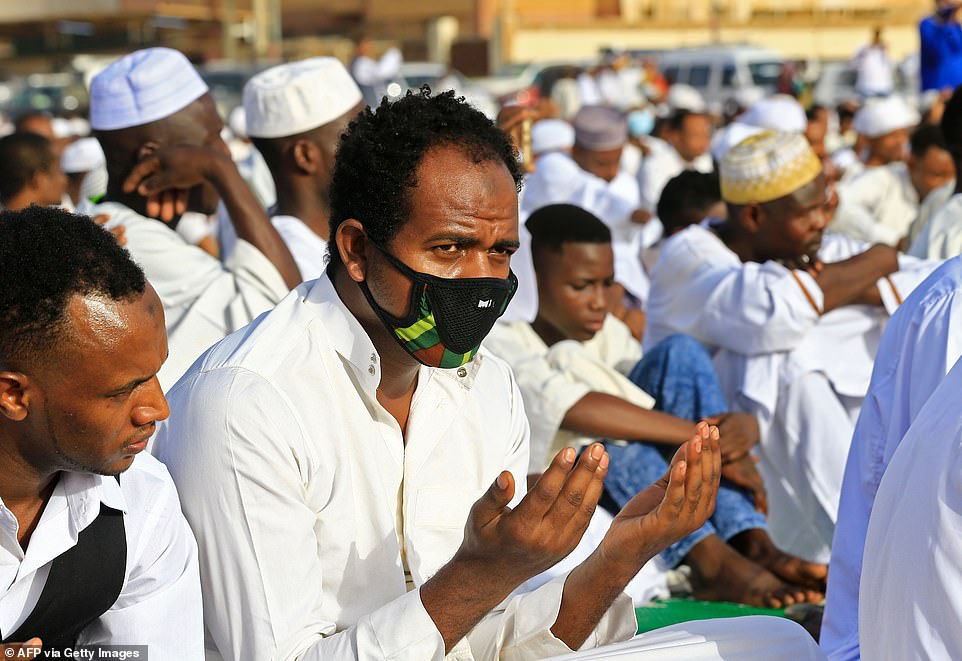 One worshipper is pictured wearing a face mask as muslims gather to celebrate the event in Khartoum, Sudan 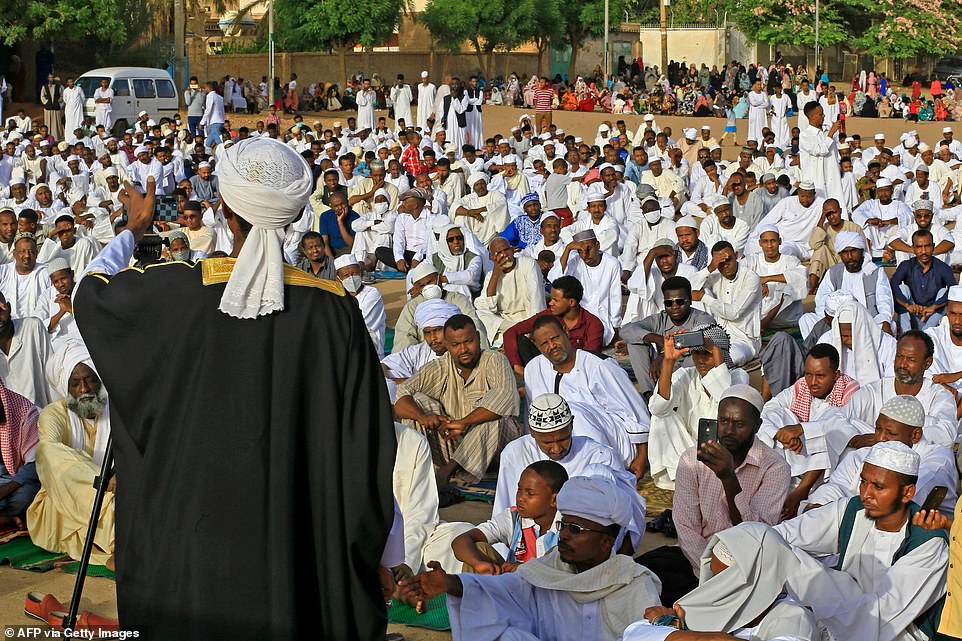 An Imam preaches a sermon before a crowd of worshippers in Khartoum, Sudan. Few face masks were worn for the event 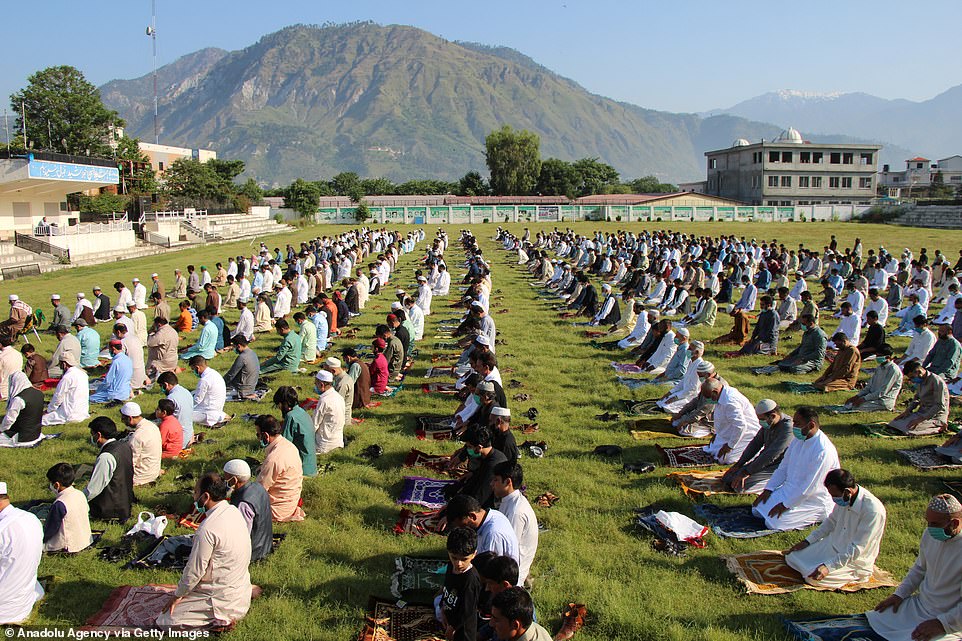 Worshippers sit apart for the holy festival in Muzaffarabad, Pakistan. They maintained social distancing while praying

The pandemic has also led to the cancellation of the “open house” tradition, where Muslims invite family and friends to their homes for a feast. The prime minister and government officials usually host open house events that attract thousands of people.

This year, the government allowed family members living nearby to visit each other on Sunday only, but the gatherings must not exceed 20 people in the same house.

Mosques have reopened but are limited to small congregations of up to 30 people.

Rohaizam Zainuddin said he was blessed he could celebrate Eid with his elderly parents living nearby, but his sister in another state could not return home.

‘We feel sad and, being human, we are frustrated that celebration this year is not the same,’ he said. ‘But there is no point getting angry. We just have to accept it, life goes on.’

He and his family members are still wearing new clothes and preparing traditional dishes. Plates of cookies are set out for any visitors, alongside a thermometer and hand sanitiser, in keeping with regulations.

Malaysia has reported 7,185 infections and 115 deaths, but officials fear the Eid festivities could spark a new wave of infections if people ignore social distancing and health measures. 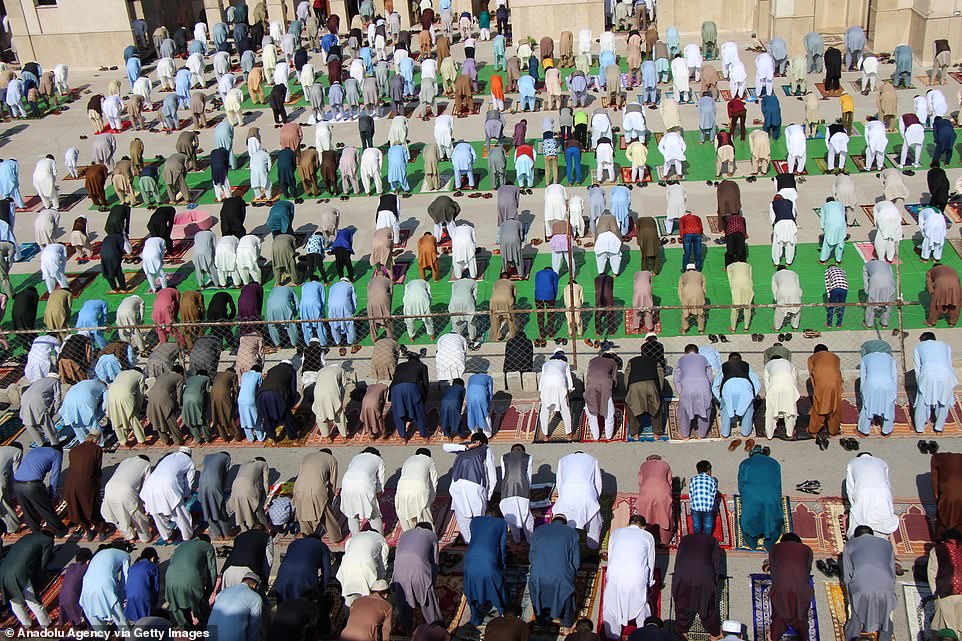 Pakistani muslim worshippers pray together during Eid al-Fitr in Muzaffarabad. They were not allowed to shake hands 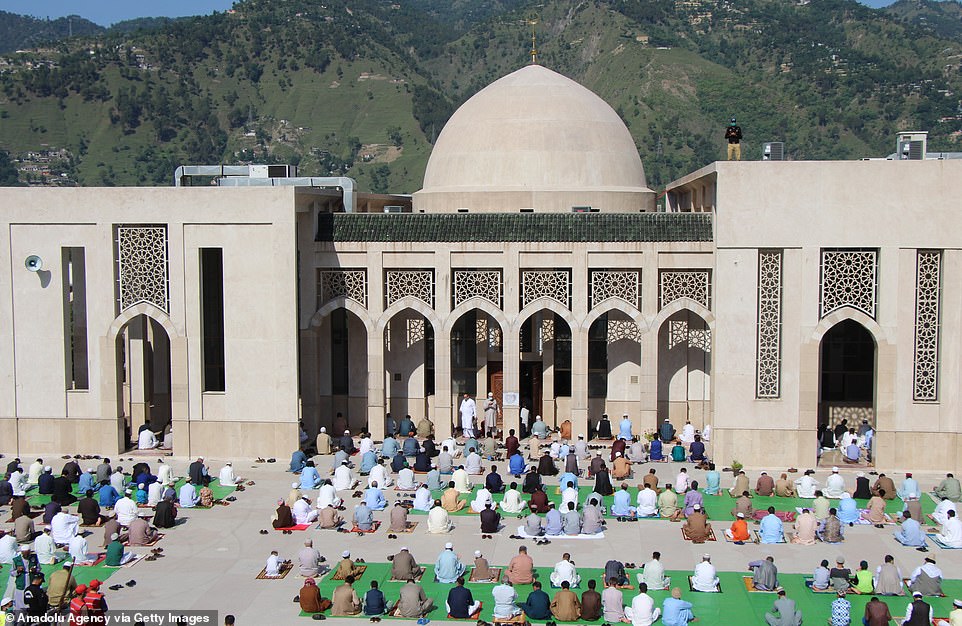 Muslim worshippers sit on matts outside the main mosque in Muzaffarabad, Pakistan. They were not allowed to shake hands 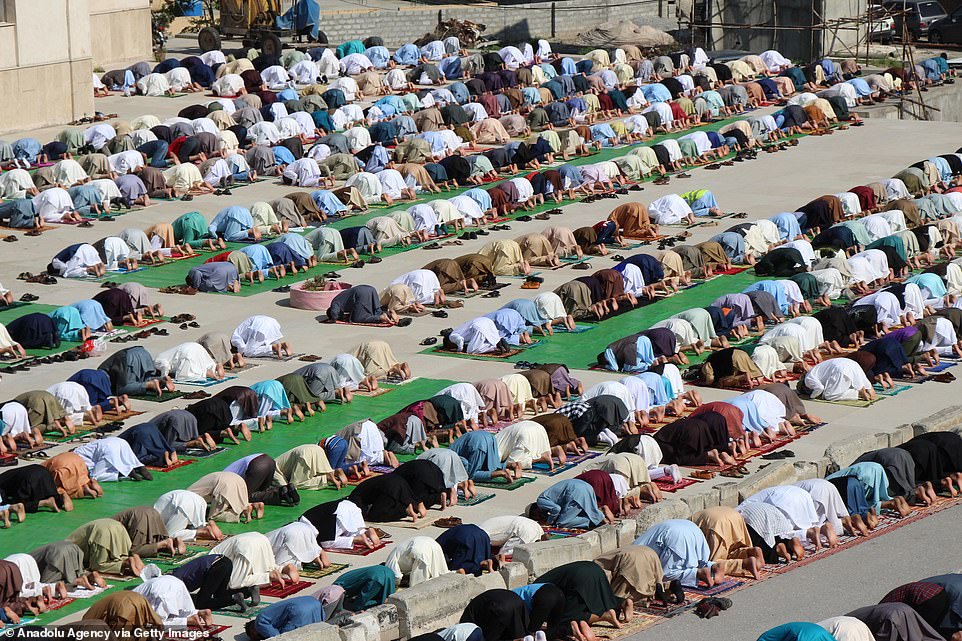 Muslim worshippers sit on matts outside the main mosque in Muzaffarabad, Pakistan. They were not allowed to shake hands

In Pakistan, Eid is being celebrated in the shadow of the coronavirus and in the wake of a passenger plane crash near Karachi on Friday that killed 97 people.

For the first time, Pakistan is celebrating Eid countrywide on the same day, ending an annual controversy between rival committees over the moon sighting that signals the start of the holiday.

Pakistan has taken measures to control the spread of the coronavirus since mid-March, but Prime Minister Imran Khan refused to close mosques during Ramadan, despite pleas from doctors and a rising number of infections. Pakistan has reported more than 52,000 cases and more than 1,100 deaths.

More than 1,000 worshippers gathered and prayed shoulder-to-shoulder in a open field in Karachi on Sunday, with only a few of them wearing face-masks. 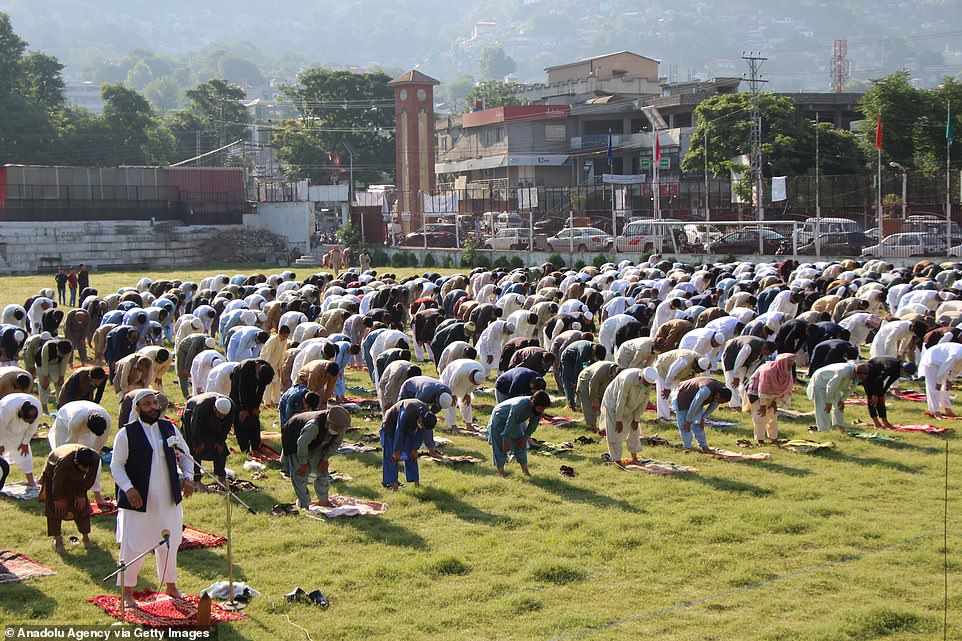 Worshippers pray on a lawn in Muzaffarabad, Pakistan. They stood apart in order to observe social distancing rules 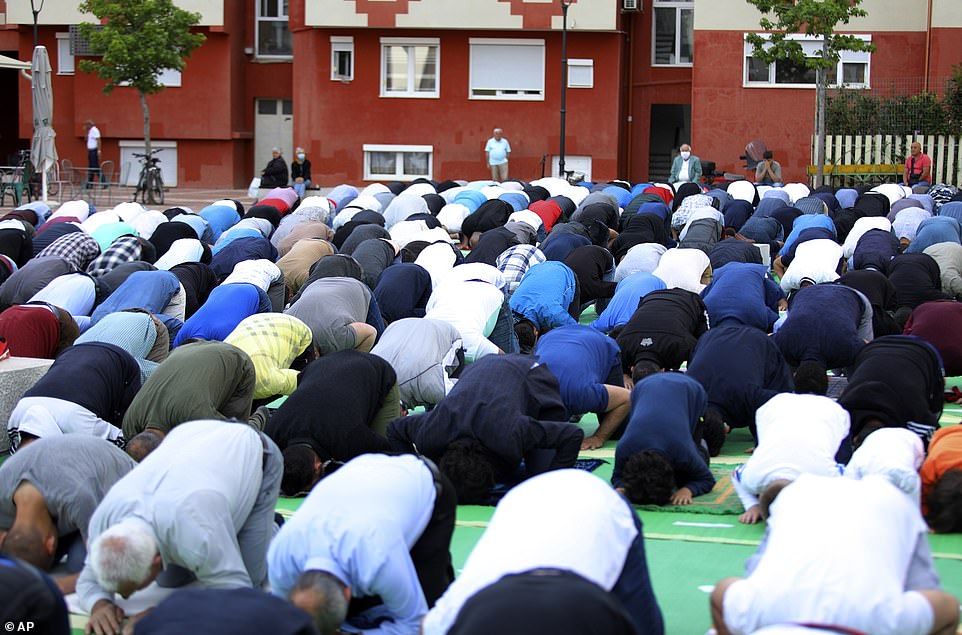 Muslims lean forward in worship at the main mosque in Tirana, Albania, during the festival

In Jerusalem, Israeli police said they broke up an “illegal demonstration” and arrested two people outside the Al-Aqsa mosque, which Muslim authorities have closed for prayers since mid-March and will not reopen until after the holiday. An Associated Press reporter at the scene said worshippers had tried to enter the compound.

Al-Aqsa is the third holiest site in Islam and would ordinarily welcome tens of thousands of worshippers during the Eid. The hilltop compound is also the holiest site for Jews, who know it as the Temple Mount. The site has long been a flashpoint in the Israeli-Palestinian conflict.