Hundreds of passengers on board a vintage ship travelling from Liverpool to North Wales were seasick during horrendous conditions on Saturday.

MV Balmoral, originally built in 1945, set sail at 9am from Liverpool but an hour into the journey it hit choppy waters and ’tilted and tipped’ violently.

Around three hours into the voyage it was announced the ship wouldn’t be able to dock in Llandudno because of the treacherous weather and would have to turn back to Liverpool for a further ‘three hours of torture’.

Passengers reported how there was ‘uproar’ at that point and three-quarters of the 390 on board were sick.

Erica Thompson, 45, from Bromborough, in the Wirral, who was on the ship with her mother Alma, 81, said: ‘It was supposed to be a scenic cruise along the coast and all we got was sea, sky, sea, sky, as we bounced furiously up and down.’

Owners White Funnel Ltd insisted the ship was ‘not in danger at any time’ and the shipping forecast ‘indicated the sea state would be suitable for sailing’.

However they ‘expressed regret’ over the passengers’ ‘spoiled day’.

Balmoral arrived back in Liverpool at just before 3pm, where paramedics were waiting to tend to an elderly woman who had collapsed.

Passengers described how elderly people were ‘thrown around like rag dolls’ with many vomiting from seasickness for the entire six hour journey.

Those on board formed human chains to help vomiting passengers reach the toilet as they were thrown around the ship.

The hellish experience was quite the contrast from the ship’s website which boasts of providing a ‘rare and very special experience’ on the museum ship around the great British coastline.

Mandi Crisp, from Wallasey, wrote on Facebook: ‘I have never seen so many strangers throwing up in front of each other. My poor four year old was so sick, old dears being thrown around like rag dolls and then the paramedics coming on to help one lady who had collapsed.

‘Was looking forward to it but I will never go on a small boat again. It wasn’t made for those huge waves.’

Frances Williams added: ‘Six hours of sheer hell with so many people being sick everywhere and crying to get off.’ 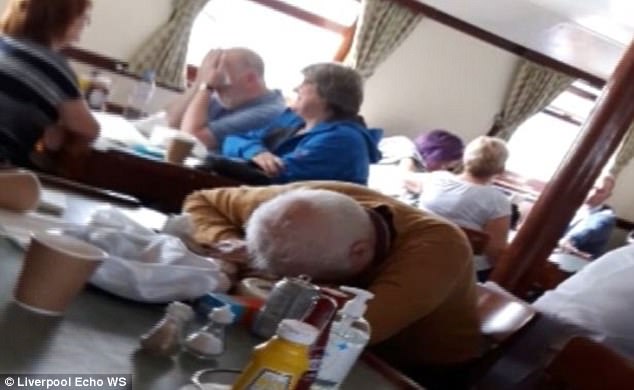 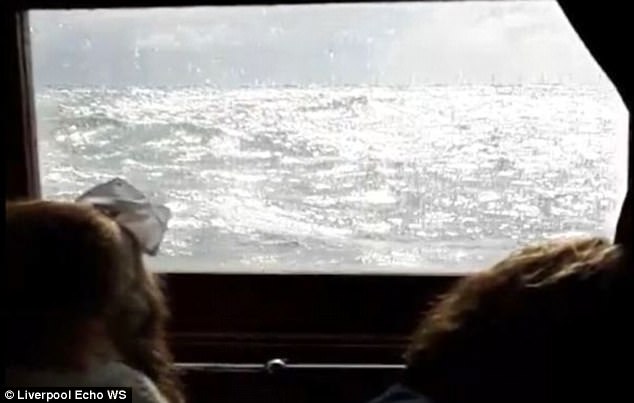 Ashley Warburton said: ‘Well that was an adventure. Sea much rougher than forecast. Loads of people throwing up including me.

‘Was abandoned half way and 2 ambulances had to meet the boat when we got back to Liverpool!

‘It was rougher than was forecast. Winds were 20mph higher than expected. They couldn’t stop at Llandudno so at first were just going to sail round Anglesey and back but it got worse and so many people were ill that they had to turn round and go back Liverpool.’ 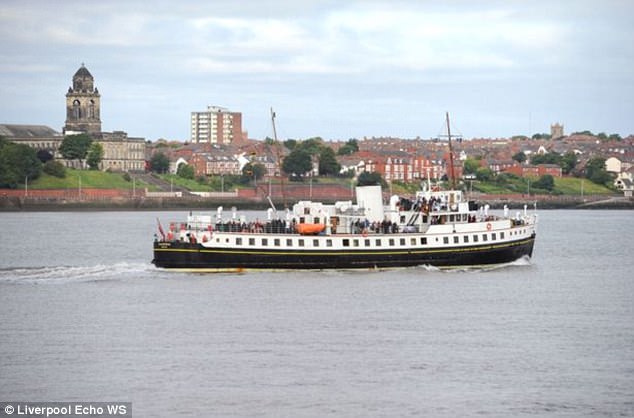 Originally built in 1949 and now for over 65 years, the MV Balmoral was travelling to Llandudno

Louise Clarke said: ‘It was the roughest sail we’ve ever experienced. It was terrifying for me and my partner who has walking difficulties. It was an utter nightmare, there was no where for people to sit, people vomiting including myself for the whole journey, toilets backing up and people crying to get off.

‘Human chains were being made so people could get to the toilet. As we got near Llandudno we were told we couldn’t dock and so turned back to Liverpool to be put through another three hours of torture. A lady collapsed and had to wait in the toilet for six hours before paramedics came. We have been left traumatised by this.’

Nicola Foster said: ‘It was absolutely the worst experience ever. For five hours my mum was vomiting…they should never have let us go with that weather.’ 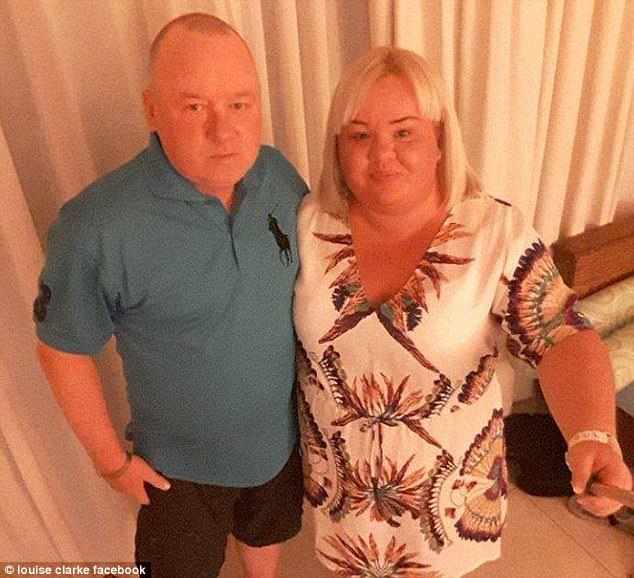 Louise Clarke (pictured) said: ‘It was an utter nightmare, there was no where for people to sit, people vomiting including myself for the whole journey, toilets backing up and people crying to get off’ 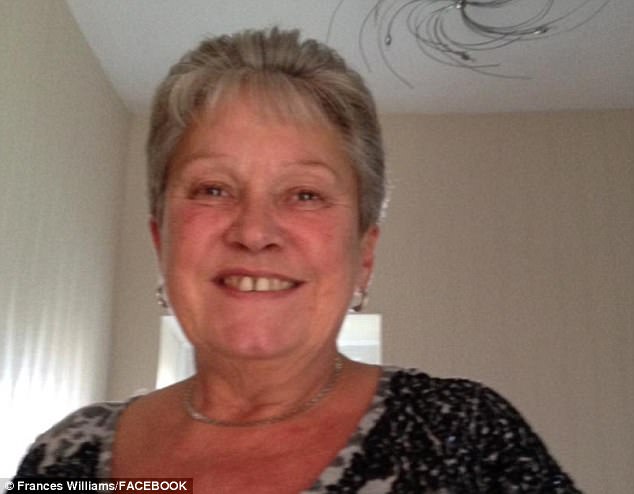 Frances Williams said: ‘Six hours of sheer hell with so many people being sick everywhere and crying to get off’

Erica Thompson, from Birkenhead, added: ‘Completely unprofessional and unsafe. I felt so sorry for all those who were seasick. Some people were quite obviously very distressed but they wanted to carry on the trip for another 8 hours. Never again!’

Joanne O’Sullivan said: ‘Worse day of my life, my poor babies were terrified and vomiting everywhere, my three year old was sick all over herself, I’ve never been so scared for my babies safety and felt terrible for organising it as a surprise for them.

‘I will never ever be taking them or myself back on a boat. We should never have left Liverpool never mind sailed for three hours getting thrown around. A poor lady collapsed and spent around 5 hours lying in the bathroom until met by paramedics and an ambulance at dock. We are thoroughly traumatized.’

Dena Baehr (pictured) described passengers ‘falling on one another, many covered in vomit and in shock’

Dena Baehr said: ‘We were on the deck but when the weather got worse and we were getting splashed by waves, we had to try to find seats inside and the family was spilt up.

‘When it got worse again and we tried to find each other it was even more terrifying – people were sat on the stairs, stood at the top of the stairs, clogged up the corridors, stood in the doorways (all while we were being thrown around) because there was nowhere else for them to go.

‘At one point, there was a loud crash of metal on metal and we didn’t know what it was. Turned out a fire extinguisher had fallen. The way people were being thrown around, falling on one another, many covered in vomit and in shock, people who should have been seated inside were forced outside despite the dangers.

‘Knowing your loved ones could be in danger and not being able to get to them is something I will never forget.’

Kerry Moss added: ‘A terrible trip all round. I’ve never seen so many sick bags being handed around.’

A spokesman for White Funnel Ltd, owners of MV Balmoral, said: ‘We realise that passengers suffered some discomfort during Saturday’s sailing which we very much regret.

‘The shipping forecast indicated that the sea state would be suitable for sailing but the conditions proved to be significantly worse than expected.

‘The ship was not in danger at any time and the number of passengers aboard, at 390, was far below Balmoral’s certificated maximum of 683.

‘We will be contacting passengers next week to express our regret over their spoiled day.

‘One lady was became unwell and received medical attention on board. As a precaution paramedics met the ship on its return to Liverpool.’

Trips on board Balmoral on Sunday and today have been cancelled due to adverse weather conditions.