And then there were the Krays. She was recruited to do their mum Violet’s hair, became a close friend and ended up visiting the brothers in prison right up to their deaths.

Her association with the infamous gangsters began in 1961 when Maureen, 20, met the eldest Kray brother Charlie (‘handsome and beautifully dressed’) in a London club. He admired her blonde hair and asked if she did home visits.

Soon she was speeding off to the East End to see Violet. ‘Her house was immaculate.’ The mantelpiece groaned with photos of her sons and their boxing trophies. Maureen recalls Violet almost bursting with pride when she said, ‘That’s my twins,’ pointing to pictures of Ronnie and Reggie.

Maureen Flanagan, now 80, recalls her memories of the infamous gangsters, the Kray twins Ronnie and Reggie, in 1961 when she was 20 (pictured modelling in 1970)

Maureen’s testimony is part of a three-part documentary, Secrets Of The Krays, now streaming on BritBox and the service’s first original factual commission.

It includes interviews with ex-Kray accomplices, lawyers for the twins in 1969 when they were convicted of murder and sentenced to a minimum of 30 years, and the widow of ‘Nipper’ Read, the policeman who broke the silence originally offered by cowed witnesses.

Their reign of terror began aged 16, when a magistrate called them ‘beasts’ after they beat up a youth in a brawl. Later they moved into protection rackets and extortion, and their arsenal of coshes, knuckle dusters, crossbows, bayonets and machetes is on view in the show.

Extraordinarily, so too are the MI5 records kept on the pair as their purchases of nightclubs led them to cross paths with figures such as Tom Driberg, a Labour MP who, like both twins, engaged in homosexual activity (which was then illegal) and Lord Boothby, a former Tory MP and Private Secretary to Winston Churchill.

Maureen says the limelight was something they craved. They were seen with Frank Sinatra, Diana Dors and Barbara Windsor. 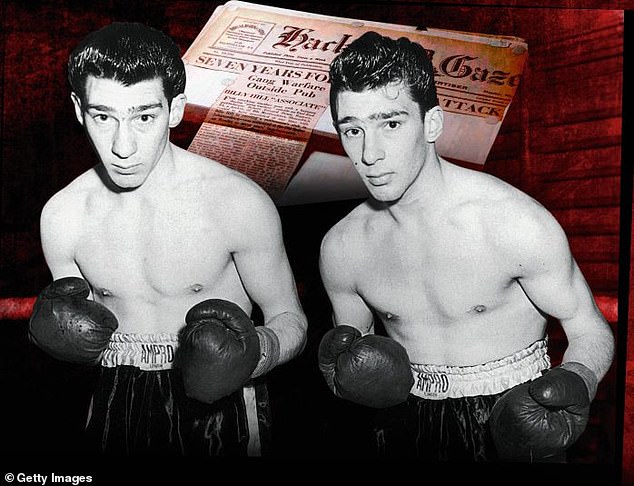 Maureen’s testimony is part of a three-part documentary, Secrets Of The Krays, streaming on BritBox. Pictured:  Ronnie (left) and Reggie in 1952

‘They got Henry Cooper to open their boxing gym. I don’t think he was keen but they said they’d donate to charity. They took Judy Garland home to meet their mum. She stood in Violet’s sitting room singing Over The Rainbow, but Vi said later that Judy was too skinny and not very well dressed. Ronnie wanted to be Al Capone and started dressing like him. Wanting publicity was their downfall.’

They had thought they were untouchable but it was Ronnie’s shooting of rival villain George Cornell in the Blind Beggar pub in 1966 that got them jailed for life when a barmaid gave evidence.

In the same 1969 trial at the Old Bailey, ‘blonde Carole’, as she was known, the resident of the flat where Jack ‘the Hat’ McVitie was stabbed to death by Reggie and wrapped in an eiderdown, told how she was paid to clean up the crime scene.

Maureen, now 80, recalls visiting Ronnie in Broadmoor (he’d been diagnosed as a paranoid schizophrenic) and Reggie in the maximum security wing at Parkhurst on the Isle of Wight. 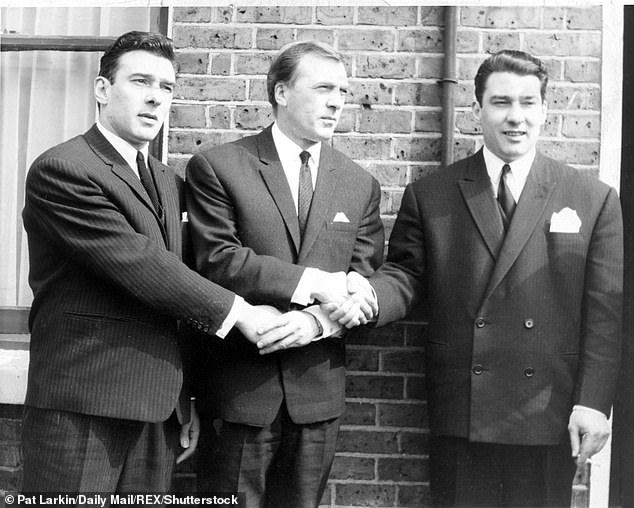 Maureen says the limelight was something they craved. They were seen with Frank Sinatra, Diana Dors and Barbara Windsor. Pictured (left to right): Reggie, Charlie and Ronnie Kray outside the family home in Bethnal Green

‘I’d wear a dress, mink coat, diamond earrings. Reggie proposed to me three times in prison but he’d had a letter from Ronnie telling him to do it. We laughed about it. He said it would help him get parole.’

Maureen’s links with the Krays sits oddly with her Page 3 fame and her time on TV comedies. ‘Benny Hill didn’t like anyone else to be funny. And he was mean. I’d buy fish and chips for him and the girls and he was the only one who didn’t pay me back.’

She got on well with John Cleese, but her bed scene with Michael Palin in Monty Python was marked by his shyness. Unlike with ‘lovely, handsome’ Irish comedian Dave Allen. ‘He had to cuddle and kiss me in bed. I had two lines to say. He ran his hands down my back, saying, “We’ll do this 25 times.”’

But it was her association with the Krays that defined Maureen’s life. She feels they were of their time. ‘They wouldn’t have lasted today. There’d be an 18-year-old with a gun who’d love to say, “I’ve just shot Ronnie Kray.”’

Secrets Of The Krays is available on BritBox now.