A pregnant woman has been blasted online after accusing a friend of ruining her gender reveal party by telling her the sex of the baby in advance.

The anonymous woman’s friend took to Reddit to share her story in the Am I the A****** section, where she asked for people’s opinions on the scenario.

In her post, she explained that after her ultrasound, the friend had the baby’s sex written on a piece of paper and sealed in an envelope.

Without looking at the paper, the friend had given it to the poster, and asked her not to reveal the answer – even if she asked.

A woman has been blasted by her pregnant friend, after sharing details about the sex of her baby ahead of the gender reveal party (stock photo)

The post said: ‘My (27f) friend (29F) is pregnant. She wanted to do a gender reveal, so at her 20 week ultrasound she got the ultrasound technician to write the gender on a piece of paper, put it in an envelope and gave it to me.

‘She wanted me to order those smoke cannons for her, her husband and their kids to pop at a photograph session to reveal what their new baby is going to be. Personally I don’t see the point in them, but it made my friend happy and I felt honoured that she trusted me with such a secret.

‘When she handed me the envelope she made me swear that under no circumstances I would tell her what it is no matter how much she begged, or tell anyone else. I agreed.’

The post continued: ‘Fast forward, I’ve had this envelope for 2 weeks now, I’ve ordered the cannons and the gender reveal is in a few days. For the past 2 weeks my friend has HOUNDED me with texts begging me to just tell her what it is, but then following up with “actually no I don’t want to know”. 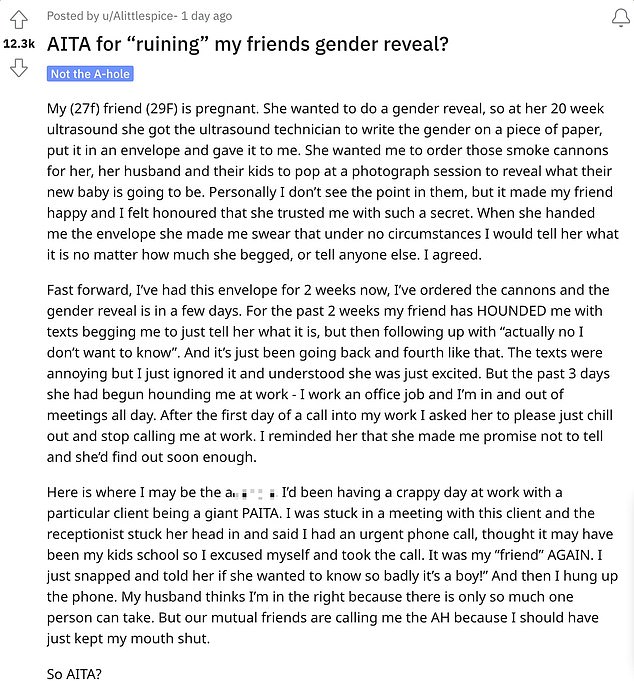 An anonymous woman took to Reddit to ask for people’s opinions on her situation, in which a pregnant friend was furious with her for revealing her baby’s sex

‘And it’s just been going back and fourth like that. The texts were annoying but I just ignored it and understood she was just excited. But the past 3 days she had begun hounding me at work – I work an office job and I’m in and out of meetings all day.

‘After the first day of a call into my work I asked her to please just chill out and stop calling me at work. I reminded her that she made me promise not to tell and she’d find out soon enough.

‘Here is where I may be the a******, I’d been having a crappy day at work with a particular client being a giant PAITA. I was stuck in a meeting with this client and the receptionist stuck her head in and said I had an urgent phone call, thought it may have been my kids school so I excused myself and took the call. It was my “friend” AGAIN.

‘I just snapped and told her if she wanted to know so badly it’s a boy!” And then I hung up the phone. My husband thinks I’m in the right because there is only so much one person can take. But our mutual friends are calling me the AH because I should have just kept my mouth shut.’

She went on to add an addendum to the post, explaining that her friend group had been annoyed because the pregnant friend had left details about her own behaviour – in which she relentlessly harangued the poster – out of the story.

Respondents to the post appeared to be unanimous in their condemnation of the friend, with many saying she had crossed a line by calling the poster at work.

Another agreed, adding: ‘NTA she crossed the line (hell she saw a fence and climbed right over it) when she got you pulled out of a meeting on the pretence of an urgent call.

Posters described the pregnant woman as being out of line for calling the poster at work, and getting her pulled out of a meeting

‘She made you worry about a potential emergency, she jeopardised your professional reputation and could have cost both you and your employer financially if you lost a client, list your job.

‘Most people would consider the barrage of texts unreasonable but I think most people would try the line at calling someone’ during working hours. If some people still believe you were in the wrong IT WAS THE ONLY WAY TO MAKE HER STOP.’

And a third said: ‘Calling you at work was way out of line, and saying it was urgent was off-the-charts out of line. You are nta by any stretch. I would have sent her a singing telegram on the subject.’

Others said the pregnant woman had been unreasonable even before calling the poster at work, with some suggesting she had been selfish and immature.

Meanwhile, many other posters blasted the woman for being unreasonable irrespective of calling the poster at work

One wrote: ‘Just because she’s pregnant and excited doesn’t give her the excuse to be this delusional. What insane person incessantly begs somebody to tell them something, goes back on it, multiple times? Then does this so much and intensely they actually call you at work?! Wtf? AND when OP finally gave in and answered WHAT SHE ASKED FOR, she gets upset? Is she ok in the head?’

Another added: ‘If she actually wanted to know, she could have called her OB or just logged in online to find out.

‘She was harassing her friend because she knew she could have an outlet without finding out the gender. So selfish and lacking control.’

And a third agreed, writing: ‘Exactly. I would tell the “friend” the first time she asked because that is how you treat adults – they can decide for themselves if and when they want to know and not act like todlers.

‘I get hormones and excitement but this behaviour is just insane and I wonder if this person is stable enough to become a parent.’