My friend tricked her husband into having children

A mother has divided opinion by asking if she could ditch a pal for moaning about her emotionally distant husband – who was tricked into having two children.

Taking to the UK parenting forum Mumsnet, the woman asked if she’s unreasonable for feeling that her friend who ‘sabotaged her own birth control twice’ has ‘made her own bed’.

She explains that she struggles to sympathise when her friend, who she’s known since school, moans about her husband – who works full time and provides for the family – because he takes ‘zero interest’ in the children.

Commenters blasted the woman, calling her actions ‘disgusting’ and ‘deceptive’ , but others said her friend should have been more loyal – by not starting the thread in the first place.

Explaining the situation, the woman wrote: ‘I have an old school friend who’s been complaining about her partner taking zero interest in their children.

‘She’s a stay at home mum and her partner works full time and is in a well paid job. He pays the bills and for anything her and the children need, but she complains he’s not emotionally present with them. He doesn’t spend any time with them or help out at all with childcare.

‘I would normally have a low opinion of a man who can’t be a**** to spend time with his kids, and it is a shame for the children. But it’s so difficult to be sympathetic with my friend. I kind of feel like she made her own bed with this situation.’ 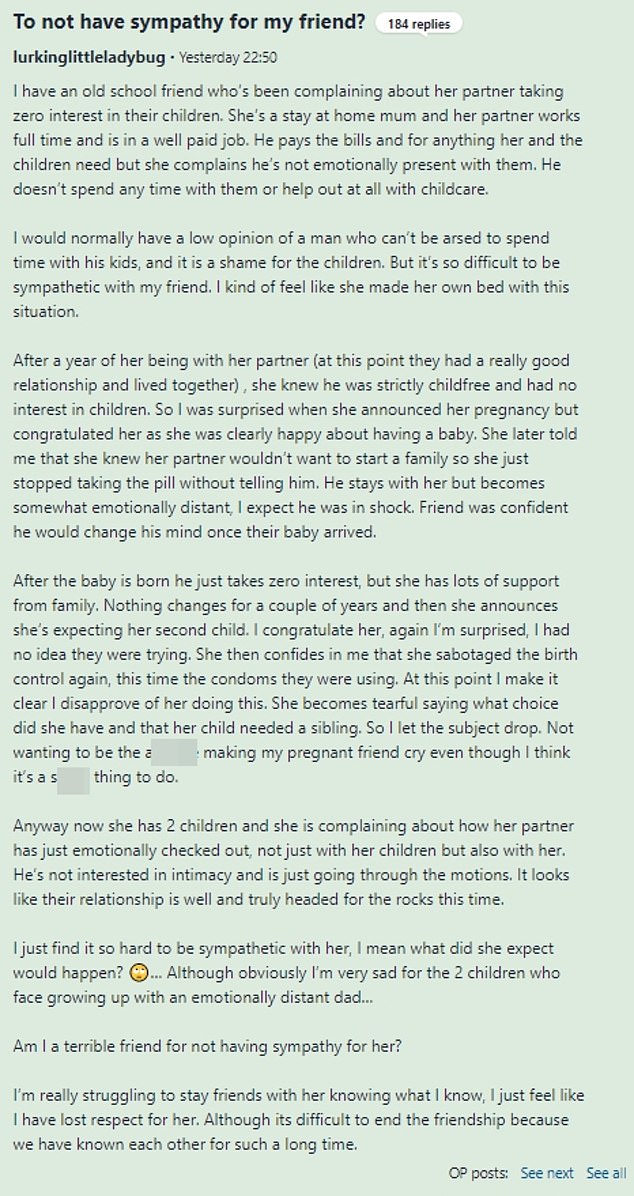 A woman posted to Mumsnet about her friend, saying she feels little sympathy for her when she moans about her absent husband while at home with the children

She explained that her friend was living with her partner for a year, and knew he had ‘no interest’ in having children when she announced her pregnancy.

‘She later told me that she knew her partner wouldn’t want to start a family, so she just stopped taking the pill without telling him,’ the woman explained.

‘He stays with her but becomes somewhat emotionally distant, I expect he was in shock. Friend was confident he would change his mind once their baby arrived. 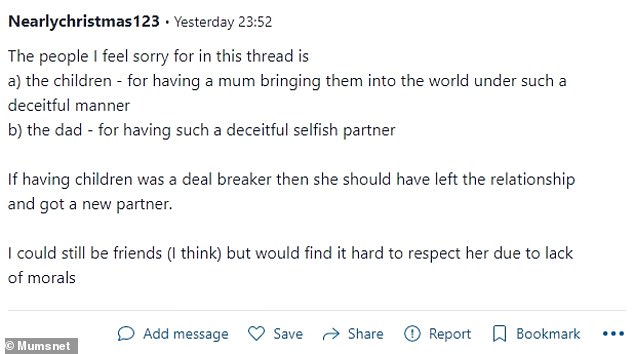 Many said that they wouldn’t feel sorry for the friend in the situation, calling her ‘deceitful’ and ‘selfish’

‘After the baby is born he just takes zero interest, but she has lots of support from family. Nothing changes for a couple of years and then she announces she’s expecting her second child. I congratulate her, again I’m surprised, I had no idea they were trying.

‘She then confides in me that she sabotaged the birth control again, this time the condoms they were using.’

The woman said she made her disapproval clear, but her friend became upset and said she had no choice because her child needed a sibling.

‘I let the subject drop not wanting to be the a****** making my pregnant friend cry even though I think it’s a sh*** thing to do.’

The Mumsnet user wondered if she was a ‘terrible friend’ for having ‘little sympathy’ for the situation, adding that she feels sorry for the children who will grow up with an emotionally distant parent.

Others said they didn’t have much sympathy for her friend’s partner, despite the fact he’d been tricked, and said he still needed to take responsibility for his children

She continued: ‘Anyway now she has two children and she is complaining about how her partner has just emotionally checked out, not just with her children but also with her.

‘He’s not interested in intimacy and is just going through the motions. It looks like their relationship is well and truly headed for the rocks this time.

‘I just find it so hard to be sympathetic with her, I mean what did she expect would happen?

Meanwhile, people called the poster out for being ‘spiteful’ and questioned how good of a friend she really was

‘Am I a terrible friend for not having sympathy for her?

‘I’m really struggling to stay friends with her knowing what I know, I just feel like I have lost respect for her. Although its difficult to end the friendship because we have known each other for such a long time.’

One commenter said: ‘Your friend did a truly horrible thing in deceiving her husband.

‘There’s ultimately no excuse for a parent not caring about his children, but your friend also has responsibly for creating this situation. I think struggling to stay friends is a totally normal response.’

Another fumed: ‘I don’t blame you for not wanting to be friends, shes made her own bed.

‘Although there’s no excuse for not being a part of your kids life! But she sure has made her own bed here.’

However others turned on the original poster – one calling her ‘spiteful’, while others said that if they’ve been friends for a long time, she should think twice before ending the relationship – even if she doesn’t approve.

‘If you’re someone’s friend you can not be happy about a situation they’re in, and perhaps totally disapprove, but the friendship part is where you hate seeing them unhappy and be tehre to listen to her,’ one wrote.

Others said they didn’t feel too sorry for her friend’s husband, despite the fact he’d been tricked.

‘He did create children so unless he didn’t know how it happens, then they really are equally his responsibility,’ one wrote.