My haven: Actor Julian Sands, 62, in the sitting room of his farmhouse in Kent

My haven, Julian Sands: The actor, 62, best known for A Room With A View, in the sitting room of his farmhouse in Kent

By Rosanna Greenstreet For Weekend Magazine

Actor Julian Sands, 62, reveals the items of personals significance in his sitting room at his farmhouse in Kent – including fossils, a sculpture and a signed copy of an autobiography

1. THE ART OF FILM-MAKING

When we filmed A Room With A View in Florence in 1985, we needed extras with a period look and hired a bearded fellow called Patrick Hamilton who looked like an Edwardian and taught art in Florence. 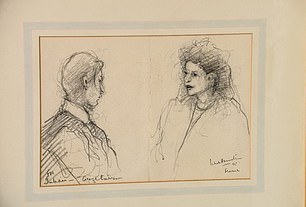 He became a friend. He did this sketch of my co-star Helena Bonham Carter and me, which I think is beautiful.

Helena was only 19 at the time. I was in my 20s and had been in the film The Killing Fields, so I felt like a veteran, but looking back I was pretty immature.

I’ve taken this ice axe to the Eiger, the Matterhorn and Mont Blanc. I love the mountains and climb all over the world.

As a boy growing up in Yorkshire, my four brothers and I spent time on the crags and fells. As I got older, the hills got bigger.

The highest peak I’ve scaled is Aconcagua in the Andes, at 6,962m, and I’ve also climbed in Antarctica, Greenland and Asia.

When I was studying drama in London, Derek Jarman [the late director and artist] was a friend and mentor.

This is one of his paintings – he was like a shaman and the first truly bohemian person I knew.

I appeared in a music video he filmed with Marianne Faithfull for her song Broken English. David Bowie failed to turn up so I stood in for him, wearing a mask.

As a boy I used to go out with a small geological hammer and a haversack in the Yorkshire Dales looking for fossils – these are part of my collection.

I went on to do geology at A-level and thought about it as a career.

As a boy I also spent a lot of time with my late mother, going to museums, galleries and country houses, and I remember the first time I went to the Geological Museum in London with her after we’d seen Tutankhamun at the British Museum.

I still enjoy looking for fossils – I was in Yorkshire recently for my younger brother Quentin’s birthday and we went out to see what we could find. 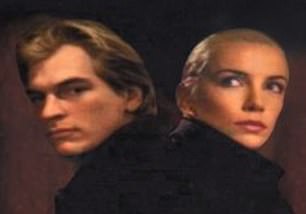 Harold Pinter was a huge figure to me. I was in a film of his play The Room with Annie Lennox in 1987, then stood in for him at a recital of his poems in 2005 when he had throat cancer – he sat in the third row mouthing the words, which was intimidating.

Afterwards he gave me this signed copy of his biography and a photo of himself.

When my wife Evgenia was pregnant with our daughter Natalya in 1996 she took a yoga class.

I saw the change in her and embraced yoga too. This mat was given to me when I first began to practise by our teacher Diane Gysbers, who studied with the master BKS Iyengar – he’s in the photo on the radiator.

The portrait of me to the left was made by our younger daughter Imogen when she was six. She’s 20 now but I still hold it dear.