Eric Bristow’s grieving girlfriend Bex Gadd, 39, said the 60-year-old darts legend wrote his was ‘going to explode’ on the day he died on April 5.

The Crafty Cockney, who was one of the first superstars of darts, collapsed and died outside the Echo Arena in Liverpool.

Bristow never told anyone about his chest pains and instead decided to go ahead with the VIP meet-and-greet with his fans claiming ‘the show must go on’.

Bex Gadd, pictured with her boyfriend Eric Bristow said the darts legend did not want to let down his friends and did not tell anyone he was feeling ill on the day he died 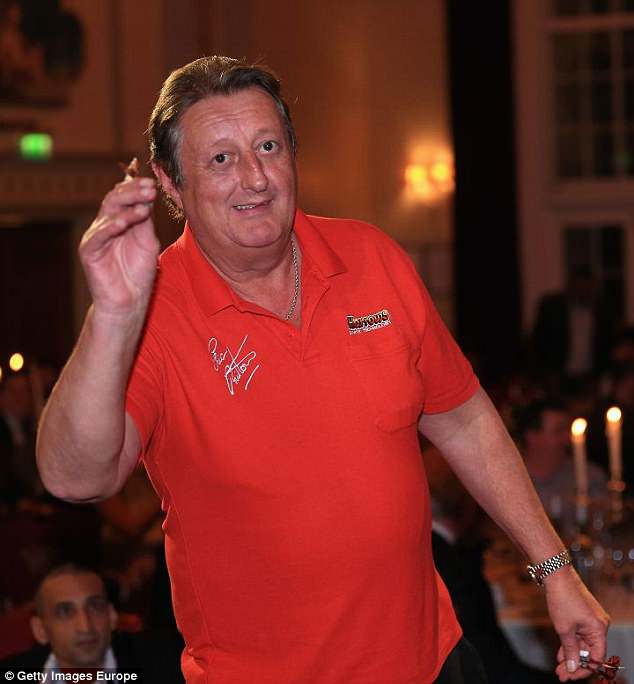 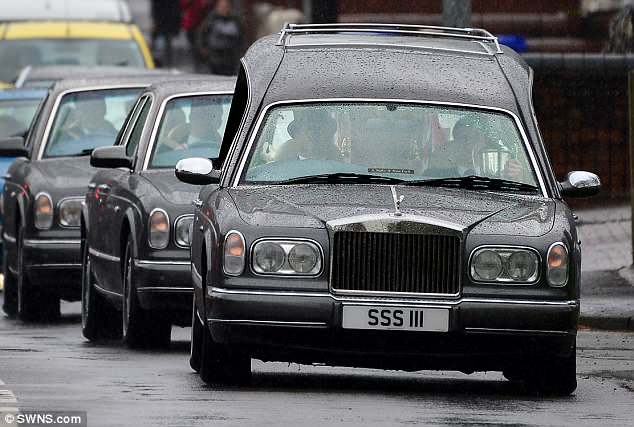 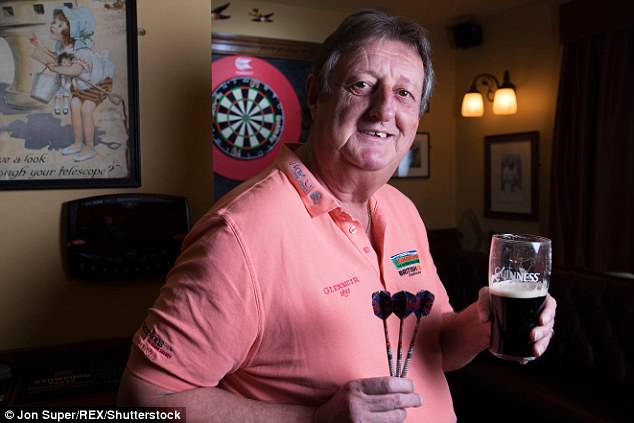 Speaking to The Mirror, Ms Gadd said Bristow should have asked for help.

She said: ‘Who knows, doctors might have spotted something was wrong, but he didn’t tell a soul.

‘He never put anything personal in the diary, just notes and things, so to write that shows he must have been worried.

‘Eric could have asked for help but didn’t. He obviously didn’t know how serious it was.’

According to Ms Gadd, Bristow had died before he hit the floor.

In his diary, Bristow wrote: ‘Cold sweats. It feels like my heart is going to explode. Don’t like it. Going to Echo. The show must go on.’

Bristow was known for his party lifestyle and was renowned for his ability to drink 15 pints of Guinness in a single session.

He won his first world title in 1980 beating Bobby George in a thrilling match. 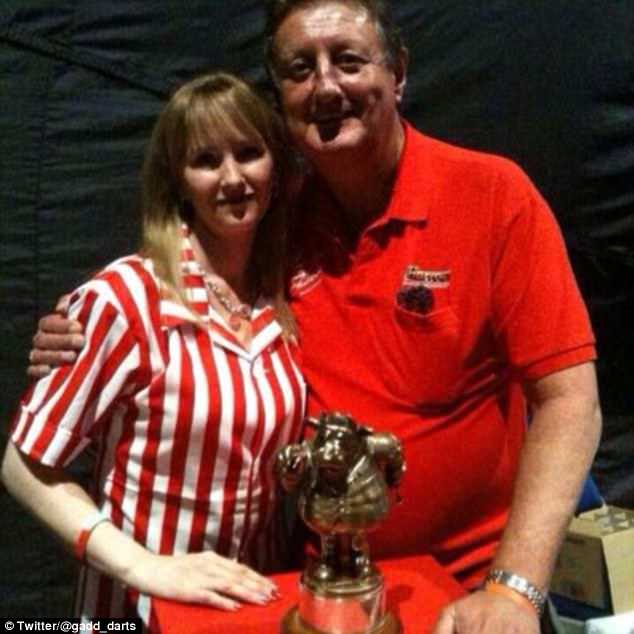 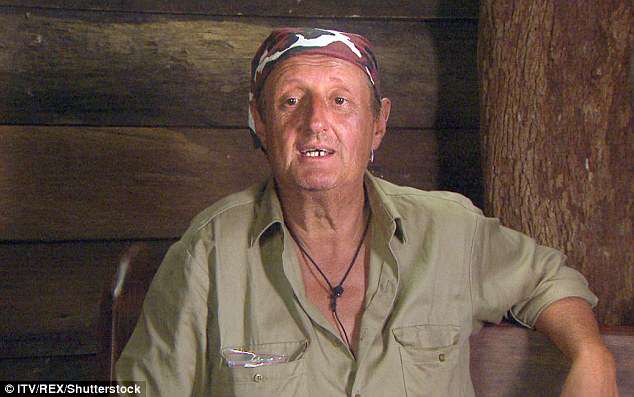 Bristow, pictured, gained a host of new fans after appearing on I’m A Celebrity in 2012 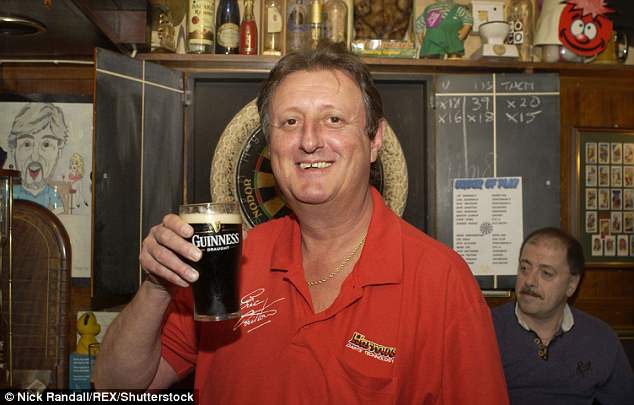 Bristow, pictured here with a pint of Guinness was buried in Stoke on Trent earlier this week

Bristow died just hours after sharing a drink with George in Liverpool.

Bristow suffered a heart attack after attending a corporate event ahead of a Premier League fixture at the Echo Arena.

The Professional Darts Corporation announced his death midway through the night’s play, with fans breaking into a spontaneous rendition of ‘There’s only one Eric Bristow’. Rod Studd stopped commentating out of respect.

The pair had been friends since their teens. Speaking to BBC Radio Two, George said: ‘In the afternoon, I was doing a show at a pub opposite the Premier League (darts) building, and he just came in, said “hello” and had a pint, then said “see ya”, I said “see ya” because I was working… he went across the road, and two-and-a-half hours later, he was gone.

‘It really shocked me bad, I was gutted. It made me feel ill. 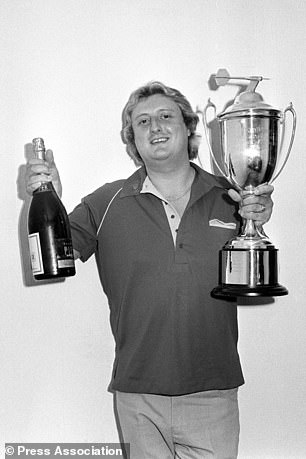 Bristow, known as The Crafty Cockney, dominated world darts in the early 1980s

‘I knew him when he was a teenager, a young man. We used to play at all the different opens and shows, or at money racing where another guy would put the money up and we would play – you had to do all that to get recognised. It was like an apprenticeship.

‘Eric lived on a dartboard every day. He had one week at a job before he gave that the elbow to keep to the darts, which he did well.’

One of darts’ first superstar players, Bristow won his five titles in theBritish Darts Organisation, dominating the sport between 1980 and 1986, which saw the beginning of the sport’s television boom.

It was a far cry from their early days of playing the smoke-filled pubs around London.

‘We used to split the money we won, we played pairs – we would never think that a year later we would be in the (world championship) final playing each other,’ George recalled.

‘I wore the sequins, had a candle, people started singing. In that match, myself and Eric, we changed the game.

‘Everyone was saying (shouting) – Eric Bristow! Bobby George! The audience got involved, it changed darts.’ 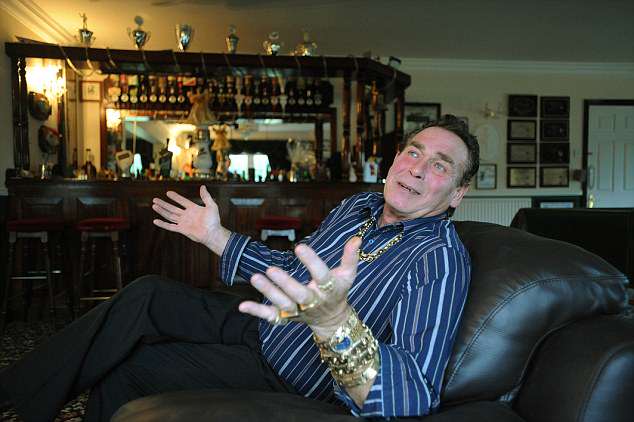 Bobby George, pictured, had a pint with his friend on the day that he died

Bristow was part of the group which formed the breakaway World Darts Council in 1993, which eventually went on to become the phenomenon which is the lucrative PDC circuit of today.

Bristow won a new generation of fans when he finished fourth in ‘I’m a Celebrity…Get Me Out of Here’ in 2012 and moved into broadcasting with Sky Sports, combining commentary duties with working as a spotter, plotting the checkouts for the players that viewers see on their screens.

His time with the broadcaster ended in 2016 after a series of tweets relating to the Barry Bennell abuse scandal. Bristow later apologised for his remarks.

‘I know what Eric was like, he couldn’t keep his mouth shut, but he didn’t care. If he thought he was right, he would just say it,’ George added.