My life as a female ISIS law enforcer: Jihadi bride reveals women had nails pulled out with pliers

My life as a female ISIS law enforcer: Jihadi bride reveals how women had nails pulled out with pliers for wearing nail polish while pregnant ‘sinners’ were tortured until they miscarried in horrifying account

A jihadi bride has revealed details of her life as an ISIS enforcer and how women who were heavily pregnant were hauled in for improper dress and had miscarriages in the police station.

Identified only as Aisha, the woman who lived in the Islamic State’s capital of Raqqa, told Al Jazeera how she desperately went to officials after her husband was ‘martyred’.

She was assigned to the state’s brutal police force, patrolling the streets for women who broke shariah laws and bringing them in for floggings.

‘My worst memory was when we arrested a woman who was not wearing a niqab,’ she told Al Jazeera.

‘It turned out she was a mute. She could not talk. She was tortured. I felt especially bad for her. They discovered she was mute while they were torturing her.’

In an exclusive interview with Al Jazeera, Aisha – who was known as Um Qaqaa under the caliphate – described her life as a law enforcer in the Islamic State’s capital, Raqqa

Before she could join the state’s law enforcement, she had to pass through a teaching course which involved beatings and jail time for those who failed to adequately learn the Quran.

After this she was assigned to a force of ten women. Three were to patrol the streets of the Syrian city in a van, while the other seven would remain back at the station to torture law-breakers.

Many of the women they arrested were pregnant and suffered miscarriages, Aisha told Al Jazeera.

Especially harrowing was an anecdote she told of a woman they dragged off the streets while she was giving birth and on her way to the hospital.

She was brought in because she had not properly covered her eyes and gave birth at the police station while they tortured her.

On another occasion a woman with nail polish was brought in for wearing nail polish. The torturers used a pair of pliers to wrench out the offending nails.

Aisha said they were expected to seek out women who did not adhere to dress codes and then back at the police station they would make them buy the correct clothes from the state. The price was around £10.

There was one woman in their ranks who was assigned to spy on them and report any laxity up the chain of command.

‘The women who were members of ISIL banned everyone from smoking, but they themselves smoked.’ Aisha told Al Jazeera. ‘In fact, I would buy their cigarettes for them. They banned alcohol but they drank. It was fine for them, but a sin for everyone else.’

Aisha said she had to torture women as part of her job. She warned others to never make this mistake.

She fled Raqqa with her children when the air raids started. 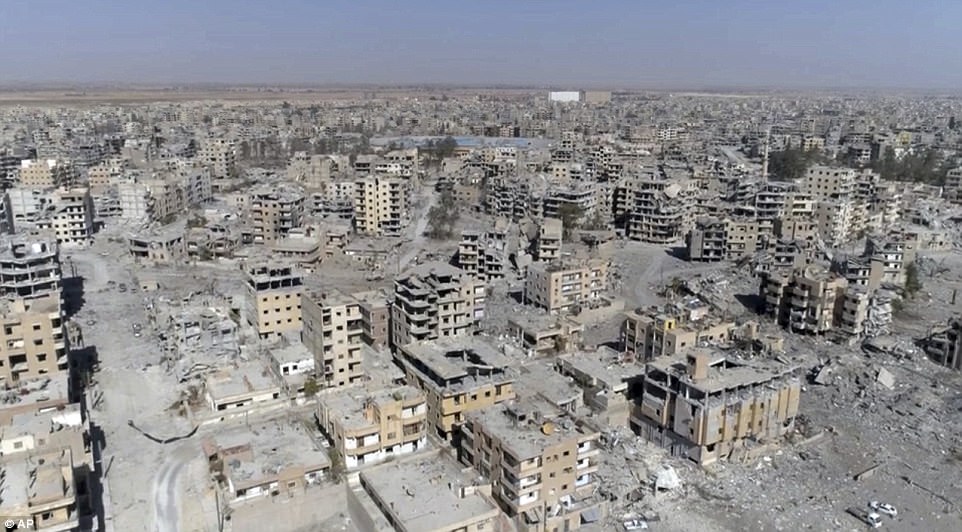 Devastated: A photo from a drone video shows damaged buildings in Raqqa, Syria, two days after Syrian Democratic Forces said the military operations to oust the Islamic State group had ended and their fighters have taken full control of the city in October, 2017 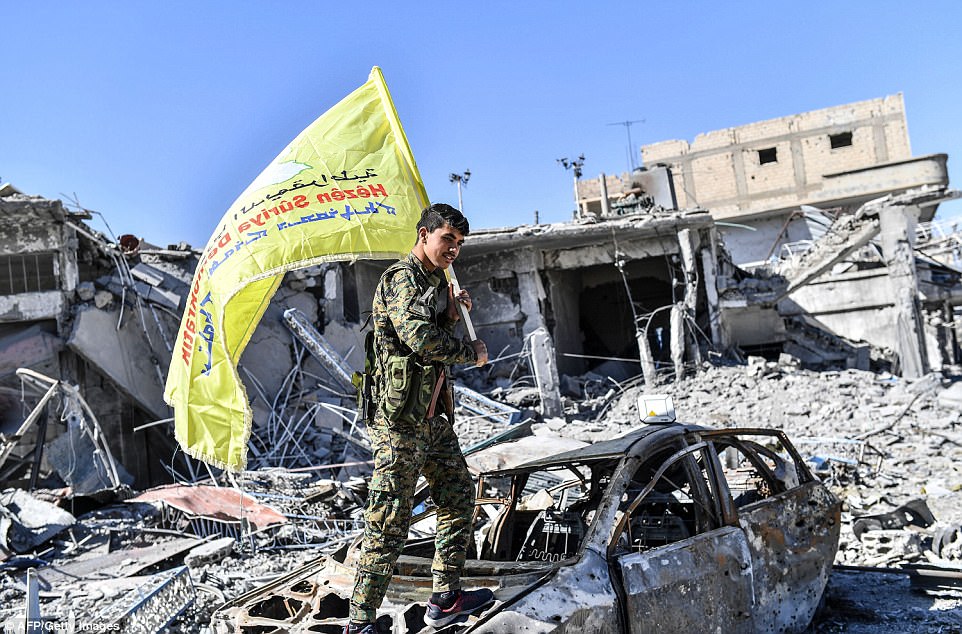 A member of the Syrian Democratic Forces (SDF), backed by US special forces, holds up their flag at the iconic Al-Naim square in Raqqa on October 17, 2017

Raqqa had served as the capital of ISIS ‘ since 2014, and was ruled with an iron fist by the jihadists for more than three-and-a-half years.

In October 2017, the US-backed Syrian Democratic Forces (SDF) announced it had liberated the city.

But it was not until March of this year that ISIS was finally crushed at their last stronghold of Baghouz across the desert in eastern Syria.

Aisha’s account is from the documentary ‘Women of ISIL’ by filmmaker Thomas Dandois.