My polo weekend in Spain? It’s a galloping success!

Saddled up: Charlotte learns the basics

Despite efforts to make polo more accessible, the sport of kings (and Princes Charles, William and Harry) remains notoriously elite.

It was not until I began to cover the Royal Family that I saw my first polo match, and with sticks flying, ponies galloping across the pitch and players barrelling into each other, I’d never witnessed such an exciting sport. But learn to play myself? I might be young, fit and able to ride (albeit unco-ordinated), but polo requires extreme skill.

That said, when I heard about a weekend crash course to learn to play, I couldn’t resist taking a flight to Gibraltar and heading to the beautiful Spanish countryside of Sotogrande.

Here the stunning family-run Polo Valley complex is famous within the polo community. It’s where top players hone their skills and families with children as young as eight learn the game for the first time, while staying in a guest house in the grounds of the ranch. The comfortable bedrooms and swimming pool are just a few feet from where all the fun takes place.

A hard-working team is on-hand, including Diego and Malena – the latter is the sister of world-famous polo player David Stirling and was more than happy to give tips.

Two cooks – both called Ana – work on rotation, and soon after arrival we were tucking into a delicious lunch of baked pasta. There was just time for a poolside siesta before an introduction to the stables.

Our group were all beginners (along with some who had never ridden), yet director Christian Byrne assured us we would play a match on our final day. He ended with a warning that, after playing, we’d be hooked for life. Training started quite easily with some gentle ‘stick and ball’ – hitting balls with wooden mallets – without the horses.

When I’d got the hang of manoeuvring balls across the field, I was summoned over to the wooden horses to practise my stance, holding the reins in one hand while balancing the mallet in the other. Then it was time to get in the real saddle, and we were presented with a selection of immaculately kept horses.

Polo ponies are trained to be extremely reactive and quick – but Polo Valley also keeps some more docile horses for beginners.

We began with basic riding in the paddock under the guidance of trainer Santi, with his firm but fair approach. Bad habits were immediately reprimanded: ‘Knees together, sit up straight, tighten the reins.’

His tough love worked, and within 20 minutes members of the group – who had never been on a horse before – were cantering around the paddock. After practising turns, trotting, and an entertaining game of ‘It’, we returned to the field to practise hitting balls. 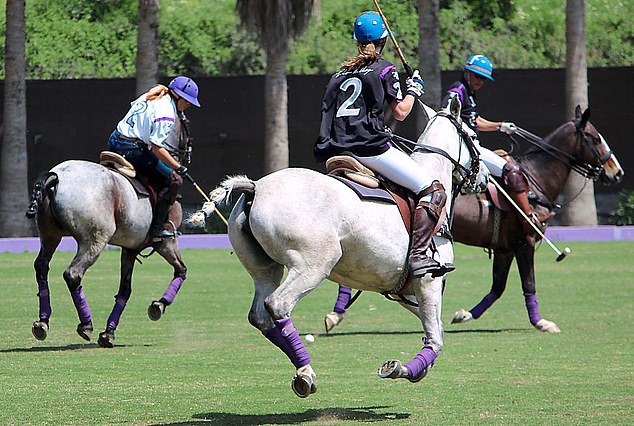 The process is all-consuming – as well as riding correctly, you must focus on hitting a ball a great distance beneath you, clinging on for dear life with only your legs. What a fantastic mental and physical workout, and the reward? G&Ts watching the sun set. We were fast asleep by 10pm.

Waking to the sound of birds and horses, a beautiful breakfast had been laid out of cooked eggs, fruit, cheese and cured meats.

We left our mallets behind for our first equine exercise – wading our way through a river hack in glorious countryside.

That night, we were treated to ‘Asado’ – a delicious Argentinian grill BBQ with Spanish wine.

Next morning we were ready to play our first mini ‘chukkers’ – the periods of time that make up a polo match. Our teams were bulked out with Polo Valley staff. While I had just about mastered trying to hit a ball without falling off the horse, the rules of polo add another layer of complexity.

Each team is made up of four players and the aim is to hit the ball through the goal, scoring more points than the opposition. So far it sounds simple. But polo teams change field direction every time a goal is scored. It is also imperative not to cross in front of another player, difficult when you have a horse and mallet to manage. As I careered across the pitch, mallet flailing, barging into horses and crossing the player with the ball in the process, I committed an impressive two fouls in the first five minutes.

After that, I decided to keep a relatively safe distance from the ball. I was finally getting the hang of it when the whistle blew.

Despite my initial apprehensions, I wanted to get back in the saddle and do it all again. I would never have believed I would be playing ‘real polo’ in less than two days. And Christian was right – you will want to keep up this expensive hobby for life.