UNITED NATIONS (AP) – Myanmar’s U.N. ambassador insisted Monday that there is no “ethnic cleansing” or genocide taking place against Muslims and objected “in the strongest terms” to countries that used those words to describe the situation in Rakhine State.

Hau Do Suan used his “right of reply” at the end of the six-day gathering of world leaders at the General Assembly to respond to what he called “irresponsible remarks” and “unsubstantiated allegations” repeated by countries in their speeches to the 193-member world body.

He didn’t identify any of the nations, though many spoke out about the plight of more than 420,000 Rohingya Muslims who have fled from Myanmar to Bangladesh since Aug. 25, when Rohingya insurgent attacks on security forces prompted a military crackdown and reprisals by majority Buddhists.

Among those who accused Myanmar of trying to rid itself of Rohingya were Bangladesh Prime Minister Sheikh Hasina, U.N. Secretary-General Antonio Guterres, U.N. human rights chief Zeid Ra’ad al-Hussein, and a number of Islamic countries, including the United Arab Emirates.

“There is no ethnic cleansing. There is no genocide,” he said. “The leaders of Myanmar, who have long been striving for freedom and human rights, will not espouse such policies. We will do everything to prevent ethnic cleansing and genocide.”

He called the issue of Rakhine State “extremely complex” and urged U.N. member states and the international community “to see the situation in northern Rakhine objectively and in an unbiased manner.”

Pointing to the initial attack by the insurgent Arakan Rohingya Salvation Army, known as ARSA, he said: “It is the responsibility of every government to fight against terrorism and protect innocent civilians.”

The ambassador said there are several reasons for the exodus and “prominent among them is the fear factor.” Following the Aug. 25 attacks and the security operation, he said, “most of the women and children were forced to flee” while men were conscripted into ARSA to fight Myanmar’s security forces.

“The scorched earth policy employed by the terrorists is another factor,” Suan said. “The terrorists planted IEDs everywhere, blew up bridges, and committed arsons.”

Amnesty International has said it turned up evidence of an “orchestrated campaign of systematic burnings” by Myanmar security forces targeting dozens of Rohingya villages. The human rights group released video, satellite photos, witness accounts and other data that found over 80 sites were torched and said as recently as Friday that fresh fires continued in Rakhine and that satellite and video images showed smoke rising from Muslim villages.

The Rohingya have faced persecution and discrimination in Buddhist-majority Myanmar for decades and are denied citizenship, even though they have lived there for generations. The government says there is no such ethnicity as Rohingya and argues they are Bengalis who illegally migrated to Myanmar from Bangladesh.

U.S. Vice President Mike Pence last Wednesday lamented the “terrible savagery” of Myanmar’s security forces and warned that the violence against the Rohingya will “sows seeds of hatred.”

He called for an end to violence and a long-term solution and urged the U.N. Security Council to take “strong and swift action” and “to give hope and help to the Rohingya people in their hour of need.” He did not specify what kind of action he was seeking.

The council, the U.N.’s most powerful body, is scheduled to hold private consultations on Myanmar on Tuesday and an open meeting on Thursday.

He said a commission led by former U.N. Secretary-General Kofi Annan that called for economic development and social justice to counter deadly violence between Buddhists and Muslims in Rakhine has provided the government with “a clear roadmap” ahead. 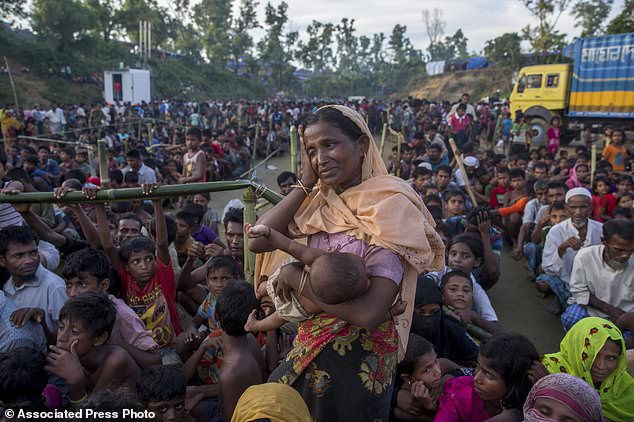 A Rohingya Muslim woman, who crossed over from Myanmar into Bangladesh, wipes her sweat as she waits to receive aid during its distribution near Balukhali refugee camp, Bangladesh, Monday, Sept. 25, 2017. More than 400,000 Rohingya Muslims have fled to Bangladesh since Aug. 25, when deadly attacks by a Rohingya insurgent group on police posts prompted Myanmar’s military to launch “clearance operations” in Rakhine state. (AP Photo/Dar Yasin) 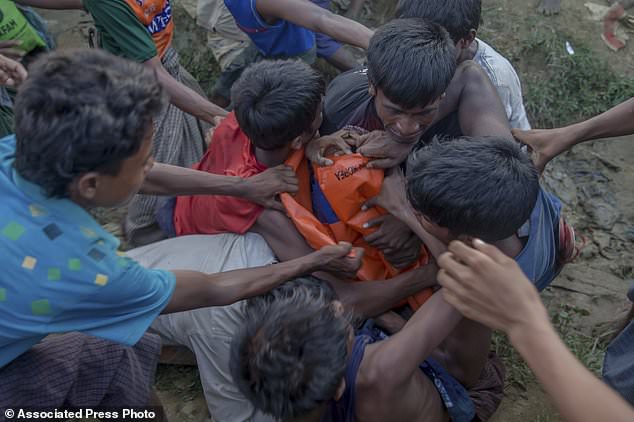 Rohingya Muslims, who crossed over from Myanmar into Bangladesh, fight for tarpaulin received in aid during its distribution near Balukhali refugee camp, Bangladesh, Monday, Sept. 25, 2017. More than 400,000 Rohingya Muslims have fled to Bangladesh since Aug. 25, when deadly attacks by a Rohingya insurgent group on police posts prompted Myanmar’s military to launch “clearance operations” in Rakhine state. (AP Photo/Dar Yasin) 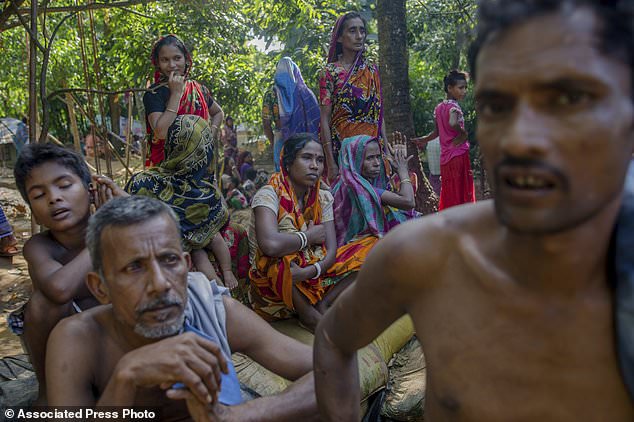 Hindu villagers, who crossed over from Myanmar into Bangladesh, sit inside a refugee camp set up for Hindu refugees near Kutupalong, Bangladesh, Monday, Sept. 25, 2017.(AP Photo/Dar Yasin)