She never fails to put on a fashion parade even amid her busy work schedule.

And Myleene Klass looked effortlessly cool as she headed to her regular radio presenting stint at Smooth Radio.

The TV and radio star teamed an eagle print t-shirt was a smart blazer for her work day, carrying her Dancing On Ice kit ready for training after her radio show. 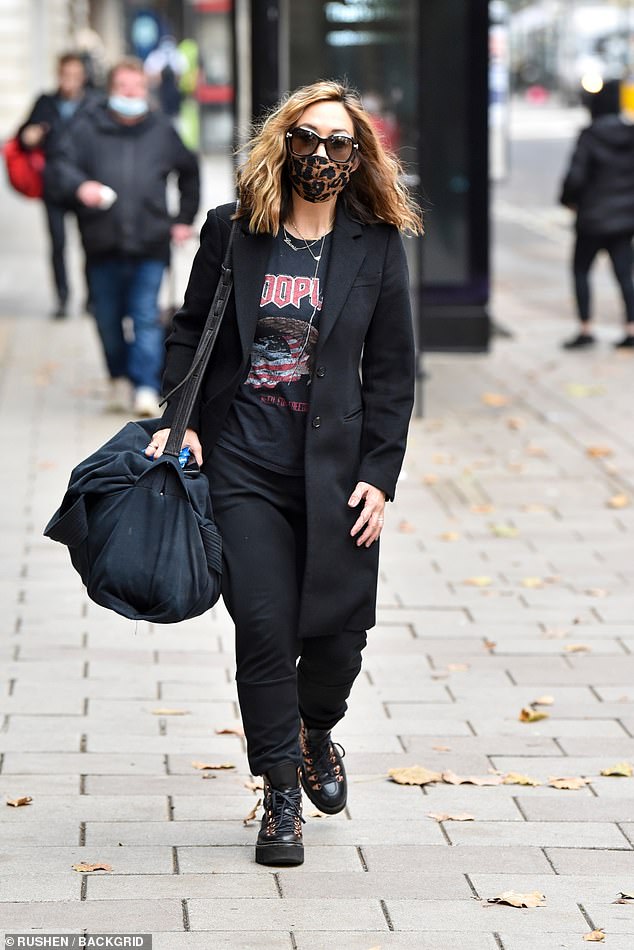 Myleene, 42, teamed her Kooples t-shirt with a longline black blazers and matching trousers.

She accessorised with touches of leopard print, matching her face mask to her chunky boots.

It’s a busy time for the star who has signed up for the new series of Dancing On Ice, which starts airing in January 2021.

Myleene, who is also a mum of three, has been squeezing in her training, revealing on Tuesday she was at the rink late at night as it was the only spare time she had in her day. 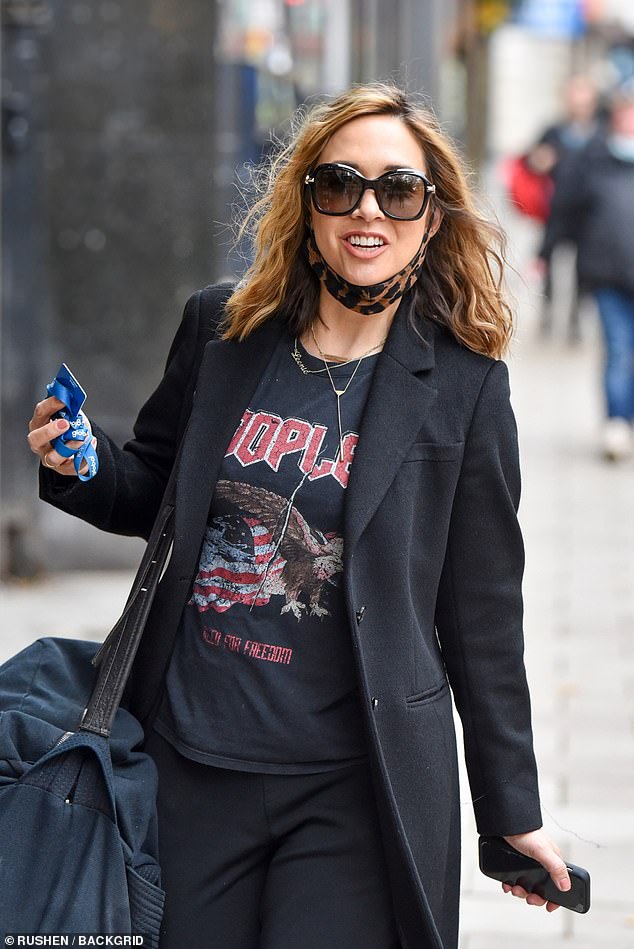 Fab: The TV and radio star teamed an eagle print t-shirt was a smart blazer for her work day, carrying her Dancing On Ice kit ready for training after her radio show

Myleene shared a video of her professional partner Lukasz Rozycki helping her on with her skates at the deserted Alexandra Palace ice rink in North London.

She later treated herself to a midnight snack of trifle when she finally arrived home, revealing on Instagram that she had eaten the whole thing after working up an appetite during practice.

The star has been keeping her Instagram followers up to date with her training, sharing a look at her first days on the ice as well as her weekly coronavirus tests.

Finishing touches: She accessorised with touches of leopard print, matching her face mask to her chunky boots 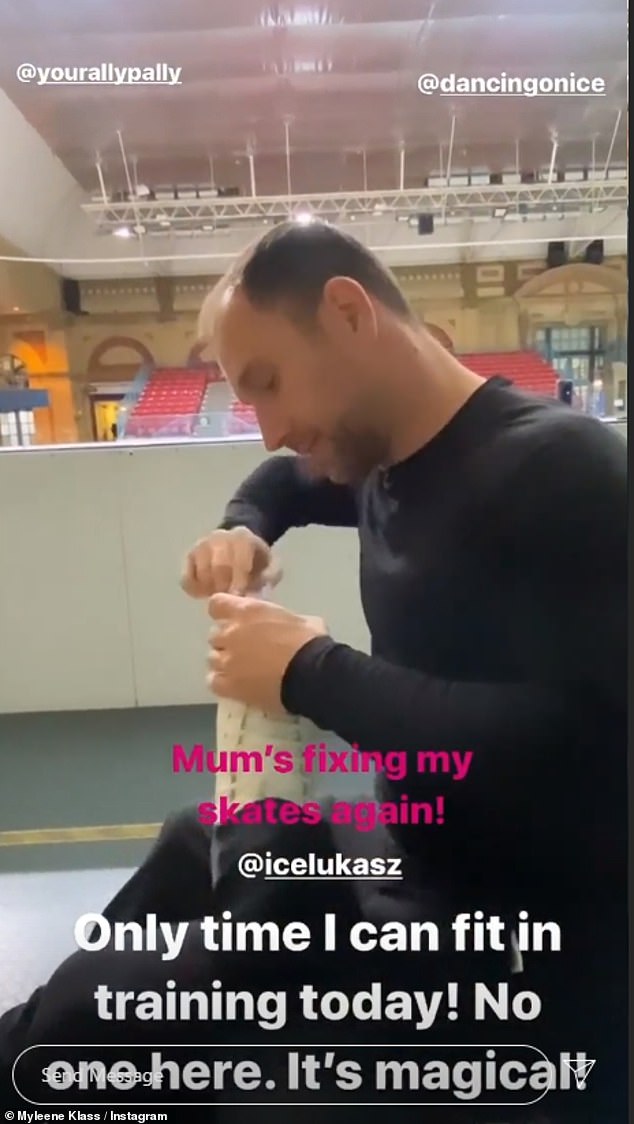 Hectic: It’s a busy time for the star who has signed up for the new series of Dancing On Ice, revealing on Tuesday she was at the rink late at night with partner Lukasz Rozycki

The Smooth FM host shared a short clip of her being swabbed for Covid as she sat on the side of the ice rink last week during her training, before her two daughters Ava, 13, and Hero, nine, tried out their skating skills.

She recently admitted that she is struggling with training after learning some of her celebrity co-stars are already learning to jump.

Myleene revealed she was feeling ‘dishevelled’ and ‘had the fear’ because some of her competitors are more advanced than she is.

She urged her followers not to ‘put their money’ on her, as she practiced her skating skills ahead of the show’s launch early next year.

Other stars already confirmed for the show include Billie Faiers, Faye Brookes, and Jason Donovan. 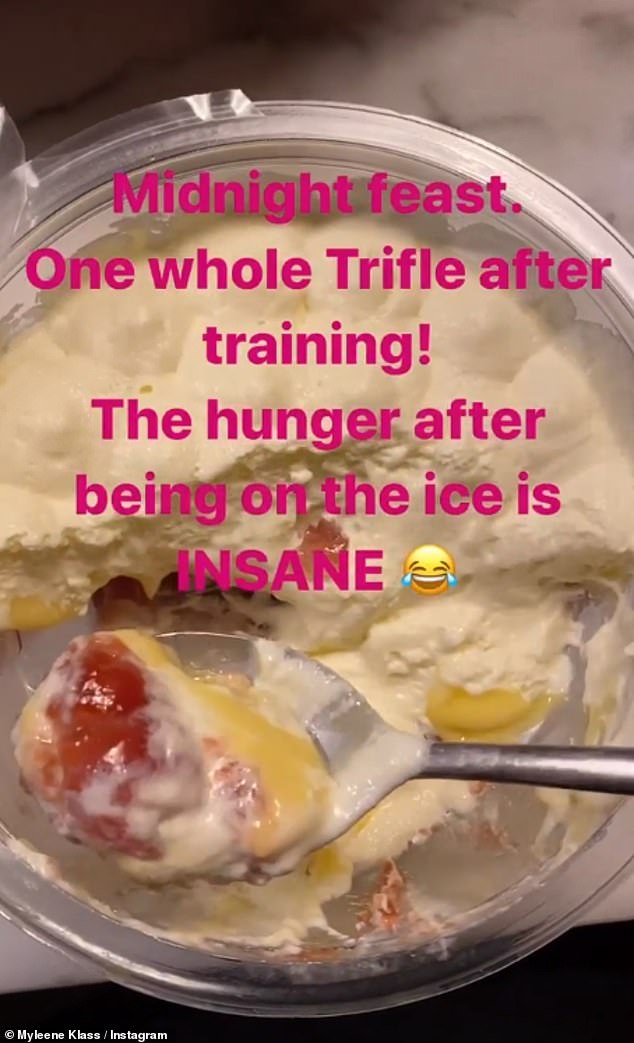 Hunger! She later treated herself to a midnight snack of trifle when she finally arrived home, revealing on Instagram that she had eaten the whole thing