Doctors who don’t use MRI scans could be missing 85% of dangerous heart inflammation linked to COVID in student athletes, study finds

Doctors who do not use MRI scans on all COVID-19 patients after infection could be missing 85 percent of dangerous heart inflammation cases linked to the disease.

With standard testing based on only cardiac symptoms, only five of the cases would have been detected, meaning using CMR detected nearly eight-fold more cases.

The research shows that more people than expected may experience long-term COVID-19 symptoms, and that CMR testing may be necessary to truly catch all cases of the condition.

Myocarditis is a condition where a persons heart becomes inflamed and expands.

The inflammation may make the heart unable to pump blood properly, it can cause heart failure and sudden death in some cases.

People with the condition often suffer from shortness of breath, an abnormal heart beat and chest pain.

Screenings are usually carried out on those who report symptoms of the condition after having a viral infection, like COVID-19.

Researchers using CMR testing found that many student athletes who did not experience these symptoms are still at risk for developing clinical myocarditis.

Four different testing strategies were used, each with different levels of effectiveness.

The first strategy was the standard way to detect the condition, by performing CMR imaging testing on people who report cardiac symptoms.

The second strategy, which detected 13 cases of myocarditis, used echocardiogram and troponin testing for all students who tested positive for COVID-19, and then performed CMR screenings on them.

The most effective strategy was performing CMR screenings on all who contracted COVID-19, finding the most cases and at least 10 that would not have been found with any of the previous methods.

All 28 student-athletes with subclinical myocarditis did not exhibit any symptoms beforehand, and would not have been screened for the condition in normal circumstances.

Performing this kind of testing on student athletes is especially important, according to researchers, since the condition is the leading cause of sudden death in athletes.

The Myocarditis Foundation reports that there are 75 sudden deaths from the condition every year from athletes aged 13 to 25, and almost all happen during or immediately after exercise. 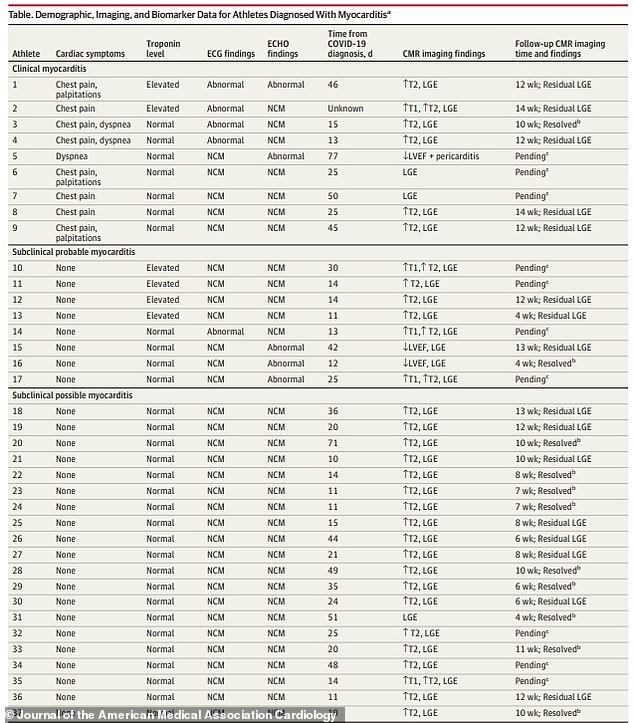 A majority of myocarditis cases were found in student athletes who reported no symptoms of the condition, meaning many cases in the real world are likely going undetected

Johnson collapsed on the court during a game against the rival Florida State Seminoles in December 2020.

He had previously tested positive for COVID-19, and was thought to have made a full recovery.

After collapsing on the court, he was later diagnosed with acute myocarditis, though some doctors believe COVID-19 may not have been related to his diagnoses.

Researchers hope that CMR testing can help prevent cases like Johnson’s, as myocarditis will be detected and treated before a player steps onto the court.