Mysterious outbreak of vomiting in dogs that swept the UK in early 2020 was caused by a CORONAVIRUS similar to SARS-CoV-2, study reveals

As Covid-19 ravaged the world at the start of 2020, dogs in the UK were suffering an outbreak of another coronavirus, a study has revealed.

Reports from concerned owners and disquieted vets at the time indicated more pet pooches than usual were getting ill and severely vomiting.

Researchers studying the outbreak now believe it was caused by an animal coronavirus — most likely a variant of canine enteric coronavirus (CeCoV).

Humans can not catch this type of coronavirus and it is not the same as SARS-CoV-2, the novel coronavirus which causes Covid-19 in people.

As Covid-19 was infecting in humans at the end of 2019, dogs in the UK were suffering an outbreak of their own canine-specific coronavirus, a study has revealed (stock)

There were various media reports of concerned pet owners who were mystified as to why their beloved companions were becoming violently ill, with vets at the time warning the condition of some animals was very serious.

Outbreaks of disease among dogs are rare because records often only come from domesticated animals, not strays, due to the need for the animal to go to a vet.

Diseases that are known to affect dogs have vaccines to prevent them, which are highly effective and prevent the majority of canine pathogens. 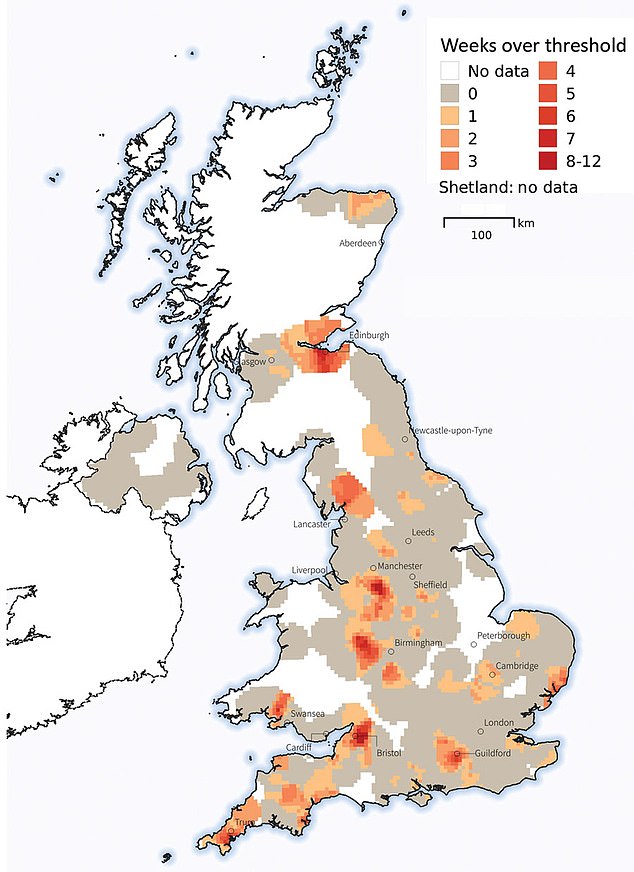 Danielle Greenberg, a vet in the north west of England, spotted around 40 cases of severe vomiting in dogs she reached out to her colleagues around the UK on social media. Analysis later revealed the virus had spread across the country.  Pictured, a map showing where the virus was found. The darker red areas show places with more severe rates

So when Danielle Greenberg, a vet in the North West of England, spotted around 40 cases of severe vomiting in dogs she reached out to colleagues around the UK.

Ms Greenberg is a co-author on the paper which combined expert opinion with lab  analysis and identified the cause of the outbreak.

A PCR test was run on samples from poorly dogs and revealed infection with the canine enteric coronavirus, a stomach bug.

Questionnaires revealed most of the dogs were up to date on their jabs and deworming and their main symptoms were a loss of appetite and vomiting.

Less than one per cent of the dogs died after contracting the virus and the dogs recovered, on average, in less than a week.

‘In conclusion, this multidisciplinary approach enabled a rapid response to a newly described outbreak of canine gastroenteritis and identified a CeCoV as a potential cause,’ the researchers write in the study, published in Emerging Infectious Diseases.

Dogs, horses and rabbits are among dozens of domesticated animals that could be susceptible to Covid

Dozens of animals which regularly come into close contact with humans are susceptible to infection with the coronavirus, a study shows.

A total of 28 species were identified as being vulnerable to SARS-CoV-2, the same virus causing the Covid-19 pandemic in humans.

While it was already known dogs and cats are at risk of infection, the latest research also reveals so too are guinea pigs, rabbits and hamsters.

Outside of a domestic setting, researchers from the University College London (UCL) found animals in zoos (gorillas, polar bears and chimps) and on the farm (goats, donkeys and horses) can also be infected with the coronavirus.

The study found that most birds, fish, and reptiles do not appear to be at risk of infection, but the majority of the mammals could potentially be infected.

Researchers investigated the spike protein on the surface of SARS-CoV-2 and how it attaches to animal cells.

In humans, it latches on to the ACE2 protein which protrudes from the surface of some cells.

University College London (UCL) scientists looked at variations of ACE2 in 215 species to see if the difference altered susceptibility to the virus.

They specifically looked at the receptor binding domain (RBD) on the viral spike to see if any mutations prevented infection.

However, most of the ACE2 equivalents were at least 60 per cent genetically identical to the human version, and of the 215 investigated animals, 37 species were found to be at risk of infection.