Mysterious fish that looks ‘half turtle, half snake’ causes panic in a Chinese city after being spotted at a popular park

Residents of a Chinese city have been shocked by a ‘strange fish’ after it emerged from a lake at a popular park earlier this month.

An eyewitness told local reporters when he first saw the back of the fish sticking out of the water, it looked like a turtle’s back; but afterwards it showed its head and its head resembled that of a snake.

It has been identified as an alligator gar, a large-size fish species from North and Central America, after being caught today.

Park rangers in China, spotted a ‘strange fish’ (pictured) that looked ‘half turtle, half snake’ 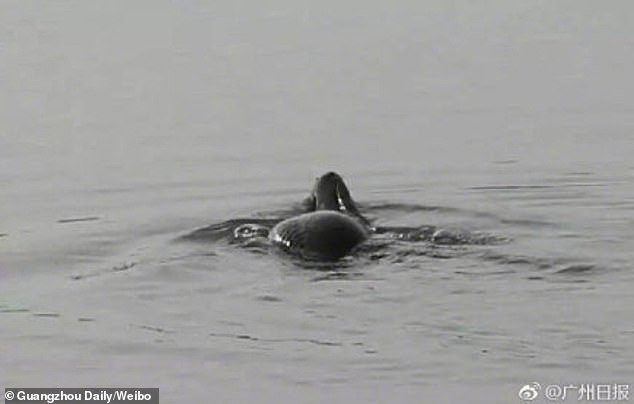 Danger ahead: The mysterious creature caused panic among park staff and city residents after being seen. It was described to be ‘ferocious’ and dubbed ‘the killer in water’ by local media 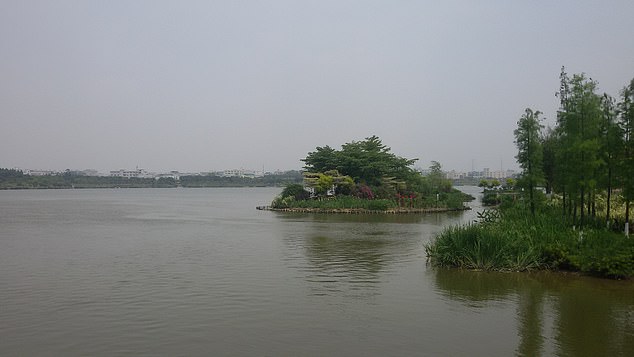 The fish was spotted on February 9 at the Baiyun Lake Park (pictured), a popular scenic spot

The fish was spotted on February 9 at the Baiyun Lake Park in the city of Guangzhou.

A park ranger, who saw the animal and took pictures of it, claimed it measured about two metres (6.6 feet) long and looked ‘bizarre’, according to Guangzhou Daily.

Song Yunchang, the head of the park’s security team, told the newspaper: ‘We had already been made aware of the existence of the strange fish before the 9th, but it had shown very little part of its body out of the water, therefore we had not been able to identify it.

Speaking to Chinese video news site Pear, one security guard described: ‘The back of the [strange fish] looked like that of a turtle and was black. Afterwards, it showed its head and it look like a snake’s head.’

Fishery experts suspected the animal to be an alligator gar after looking at the pictures taken on the 9th, according to Mr Song.

What are alligator gars? 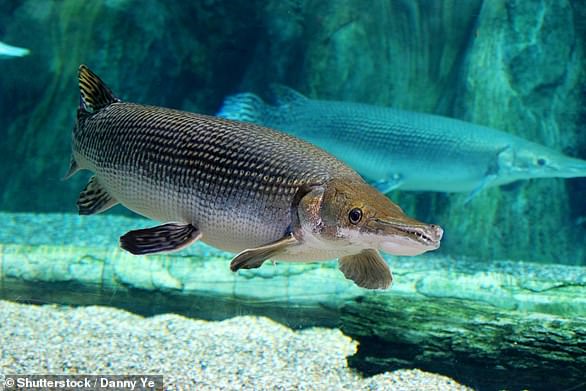 Alligator gars are a kind of large, torpedo-shaped fish characterised by two rows of sharp teeth in their mouths.

They are not native to China and mostly live in North and Central America.

They have been commercially fished in the southern part of the United States.

An average adult alligator gar is 6.5 feet long and weighs more than 100 pounds.

It’s capable of giving serious bites to fishermen and swimmers due to its large size and sharp teeth, according to Florida Museum.

Last July, a 43-year-old fishing guide reeled in a massive alligator gar that measured eight feet long and at least 250 pounds from a river in Texas.

Staff at the Chinese park immediately installed warning signs around the lake to caution visitors not to swim in the lake.

Local media described the alien fish as ‘ferocious’ and billed it as ‘the killer in water’. Journalists also worried that it could destroyed the ecosystem in the lake by ‘eating every living creature’.

A team were formed to investigate the matter and catch the fish. 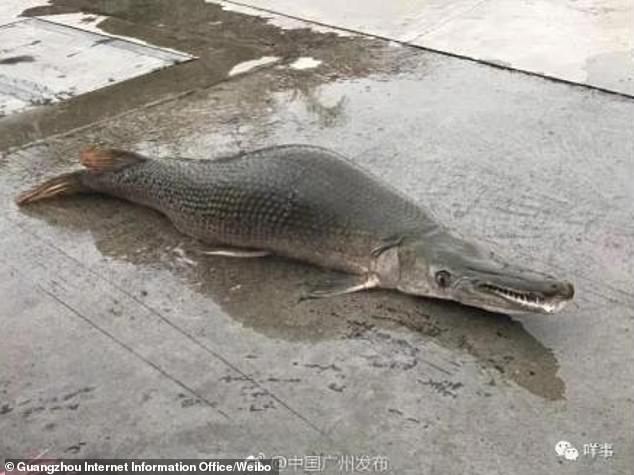 It measured 1.2 metres (four feet) in length and has been confirmed to be an alligator gar, according to an updated report from Guangzhou Daily which also released a video of the fish on shore.

Workers at the park suspected the alligator gars had swum into the lake from the Pearl River when a reservoir gate was lifted in 2013.