By Gerard Couzens For Mail Online

This is the moment a football fan celebrated Argentina’s World Cup victory by dancing naked in the centre of the nation’s capital Buenos Aires.

A clip shows the mystery woman parading unabashed in front of other merrymakers, including families with children.

Her bizarre behaviour was filmed near Buenos Aires’ iconic Obelisk monument – the same spot where Diego Maradona promised to take his clothes off 12 years earlier if his nation triumphed in South Africa.

She went on to perform a sexy dance in just a pair of sunglasses – although most of the thousands of jubilant fans partying around her seemed more interested in chanting and waving their flags than watching her astonishing display.

Diego Maradona promised to take his clothes off at the Obelisk and run round the monument if Argentina won the 2010 World Cup when he was the national team boss.

They ended up crashing out in the quarter finals after being thrashed 4-0 by Germany.

Argentinian model Luciana Salazar responded to the football legend’s offer before their 2010 World Cup disappointment by saying at the time: ‘Diego if Argentina wins, I’ll join you in the obelisk.’

Speculation has been growing in recent days in the South American nation that Salazar might go through with the stunt now they have been crowned world champions for the third time – but so far it hasn’t happened. 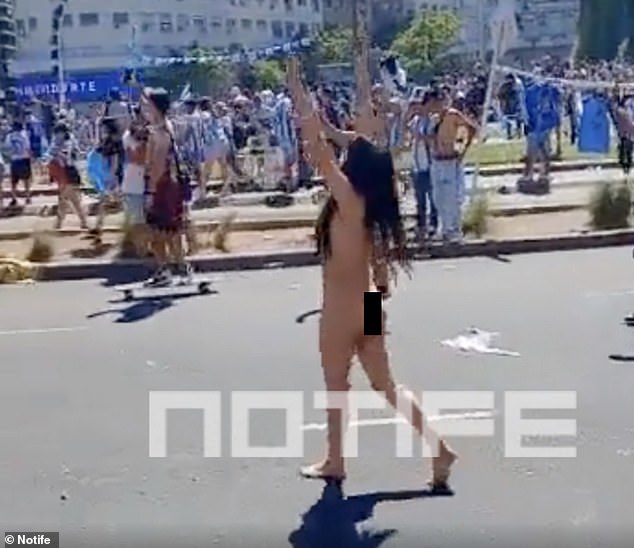 The new show of nakedness came after two Argentinians made headlines around the world for going topless in the stands at Qatar’s Lusail Stadium and risking falling foul of strict local rules as they celebrated their country’s thrilling penalty shootout win over France on Sunday.

They were later identified as two models called Milu and Noe who had artists paint their breasts especially for the occasion.

Milu and Noe, who now refer to themselves as ‘The Topless Girls’, risked falling foul of strict rules in Qatar where women are banned from wearing revealing or tight clothing.

But their antics were either ignored or missed altogether by officials and both have since posted images showing themselves out and about in the country after the final. Noe, from the Argentine city of Quilmes, even posted a selfie showing herself on a plane home, claiming to have enjoyed ‘the trip of her life’.

She had earlier shared photos of men applying blue and white paint to their breasts in a hotel room in the run-up to the final – and further clips of her and Milubarbiie jumping around with their tops off alongside jubilant fellow fans. 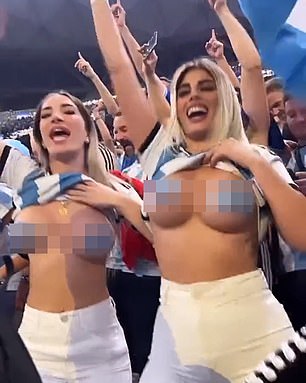 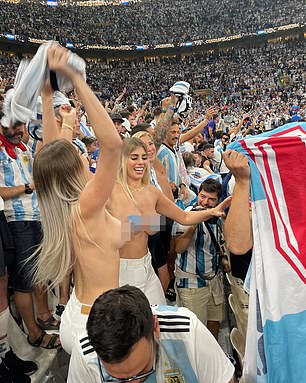 Pictured: The fans cheer on the team in the packed stadium 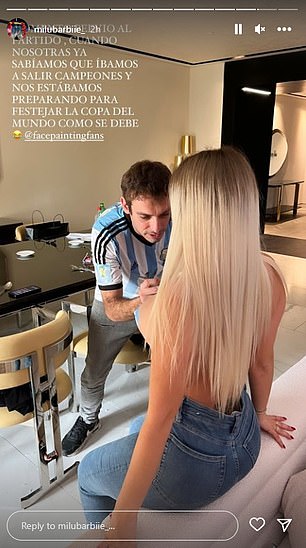 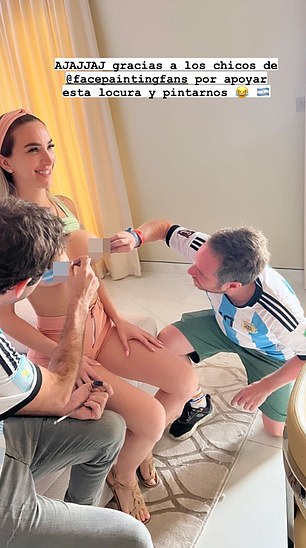 Pictured: A couple of lucky men help the friends prepare for the game

The two revellers can be seen in their hotel room posing for selfies, wearing blue and white paint on their exposed chests.

Other videos taken of the proud fans show them celebrating with men in the crowd and heading off to dance into the early hours at a nightclub after the game.

She posted a video of herself today looking happy on a plane and giving the thumbs up with a message reading: ‘Start the ship for once before they come to pick me up at 1pm.’

In another post she wrote: ‘And I dedicate this flag to you my friends, family and all the people of Quilmes and the southern zone who always support me with messages and such beautiful words for expressing their pride and good wishes that I know they do from the bottom of their hearts! My whole life is in QUILMES…

‘I am proud to have been born in the city of beer… From Ezpeleta-Quilmes to the world’.

In a third post, commenting on the World Cup, she wrote: ‘Finished the best trip of my life’.