Mystery surrounds why babysitter brutally murdered the nine-year-old boy he was supposed to be caring for – as killer offers just one callous hint in court: ‘He was really annoying’

The shattered family of a slain nine-year-old boy may never know why he was brutally murdered by a teenager who was meant to be caring for him.

Daniel Cameron, 15, stabbed Hunter MacIntosh, nine, to death while he was babysitting him in Otautau, New Zealand, on October 30, 2019.

The reason for the senseless killing may never be known as psychiatric and psychological reports have revealed very little, Stuff reported.

The reason behind the brutal stabbing murder of Hunter MacIntosh, nine, (pictured) by his babysitter and family friend Daniel Cameron, 15, may never be known, a court has heard

Cameron offered only one clue about the motive behind his actions, saying Hunter was being ‘really annoying’ on the night that he died.

The Invercargill High Court heard Hunter had been using an air horn the night he was killed.

Justice Rachel Dunningham said if that were the motive behind the murder, Cameron had ‘a very significant issue with anger management’.

On the night of his murder Hunter’s mother Amy King, stepfather Hayden Morris, and Cameron’s mother were out socialising together.

After returning home at about 10.30pm Mrs King found Hunter dead at the end of his bed with multiple stab wounds.

It’s believed the young boy had been killed within 90 minutes of being left alone with Cameron.

Hunter’s family called his killing a ‘senseless act’ for which they were still looking for an explanation.

Prior to the horrific incident family and friends said there was no indication from Cameron that anything was wrong.

He had looked after Hunter at least 10 times before while their parents would meet on a weekly basis.

‘[Cameron] chose to strangle and stab my poor defenceless little boy. My reality is I barely function. The feeling of loss is so strong I wonder how I can keep living,’ Ms King said.

‘He was my life, my world, my reason for living. He was the other half of me.’ 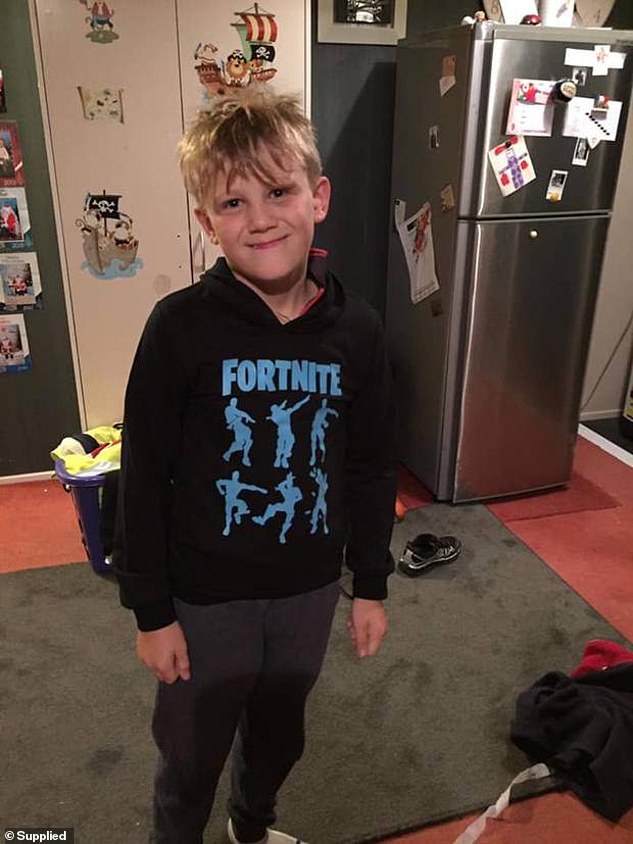 Cameron stabbed Hunter (pictured) to death in October, 2019, while babysitting him in Otautau, New Zealand, only saying the boy was ‘really annoying’ on the night he died

‘You won’t ever get a closer relationship than these two guys. Never have I seen anything like it,’ she told the New Zealand Herald.

‘They just depended on each other so much. And that’s the hardest thing, the night he died, he was alone.’

His heartbroken mother said she had no regrets except leaving her son with Cameron that evening.

During Cameron’s sentencing Justice Dunningham said she saw little remorse from the teenager.

She said Cameron had not exhibited any mental health issues and had a relatively untroubled background prior to the killing.

She sentenced the teen to life in prison with a minimum of 11 years.