A new fully private space station is being developed and could launch in a few years, according to the firm hired to build a life support system for the outpost.

Collins Aerospace in Charlotte, North Caroline, builds life support and water recovery systems for NASA that are in use on the International Space Station (ISS).

The firm says it was awarded a $2.6 million contract by a ‘long duration orbital’ customer who was building a space station, but hasn’t revealed the mystery buyer.

A subsidiary of Raytheon Technologies, Collins said they are building an Environmental Control and Life Support Systems (ECLSS) that could launch ‘within a few years’ to provide liveable conditions outside Earth’s atmosphere.

Speculation is pointing towards Axiom Space, private space tourism firm, as the buyer, as it is the highest profile firm actively planning a commercial space station.

The space tourism firm has a deal with SpaceX to ferry passengers to the ISS, and has proposed a module for the station exclusively for the use of private astronauts.

Collins Aerospace in Charlotte, North Caroline, builds life support and water recovery systems for NASA that are in use on the International Space Station (ISS) 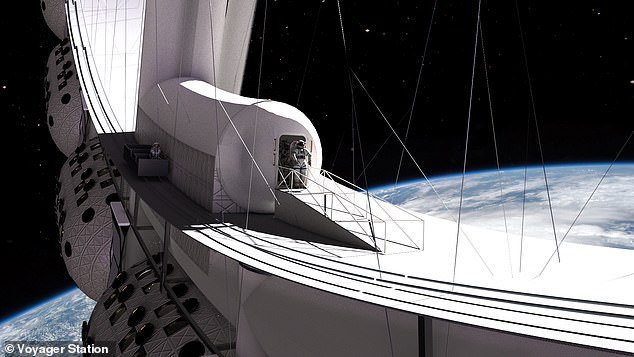 It isn’t clear who is building the outpost, although one candidate is the Gateway Foundation, planning a ring-based station due for launch in 2027

The Voyager space station will be rotating to produce Moon-level artificial gravity.

There will be an inner ‘docking ring’ which is un-pressurised to allow ships to unload passengers and cargo.

There will then be a habitation ring which will include a number of modules along the outer edge. This includes a gym, kitchen, restaurant, bar and crew quarters.

Other modules will be privately or government owned, including villas, hotels or commercial activity zones.

Low Earth orbit, where the International Space Station currently resides, could one day be littered with human habitable outposts – both commercial and government.

Currently there are two, the ISS itself, and Tiangong, the Chinese space station launched earlier this year and set to be about the size of Mir when complete.

Russia is also working on its own space station, the first time it will operate its own base in orbit since it decommissioned the Soviet-era Mir in 2001.

It isn’t clear whether this new space station, with the Collins supplied life support system, will be a module attached to the ISS or an outpost in its own right.

‘This award underscores Collins’ commitment to working with both the private and public sectors on providing the foundation for commercial space travellers to eventually live, work, and play in space.’

Axiom Space, the private space tourism operator that manages flights to the ISS with SpaceX, declined to comment on the rumour they were the buyer.

They will take three paying customers and a former astronaut to the ISS in a SpaceX Crew Dragon spaceship early next year, as part of their push into commercial, orbital space tourism.

The firm, based in Houston, Texas, raised $130 million in February to begin work building commercial modules that will be attached to the ISS from 2024.

Eventually, it hopes to adapt the modules, removing them from the ISS at the end of its life, and create a new fully commercial space station. 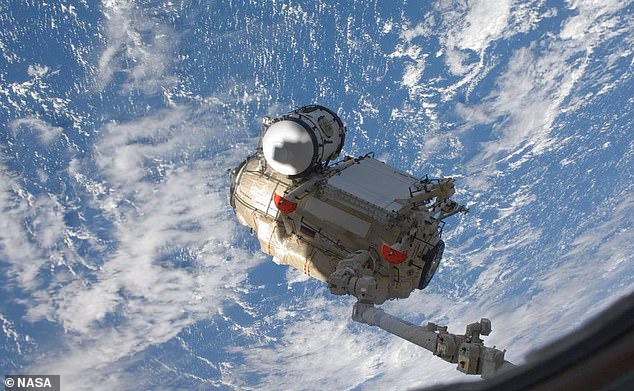 They Russian Rassvet module is the most recent habitable module to launch into space, and is attached to the ISS, used primarily for cargo storage and some payload operations 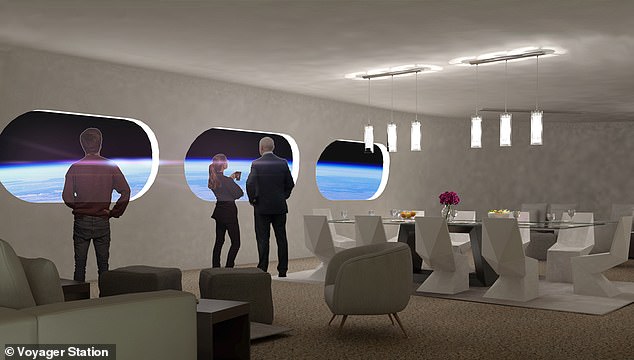 Future space stations, like the Gateway Foundation ring, could include restaurants, hotels and lounges like the one pictured

RUSSIAN SPACE STATION PLAN TO INCLUDE ‘TOURIST’ MODULE WITH WIFI

Few specific details have been revealed about the new Russian space station including its name.

Russia has a history of succesful stations, including Mir, the first modular space station with a crew of 3.

They also formed the core of the ISS when it was constructed in 1998 alongside the US.

The new station is expected to have five modules including a ‘tourist module’ that will include two large windows looking to Earth and Wifi.

The first core module is expected to launch for space in 2025 with the station assembled around it in space.

Thales Alenia Space is building the first two modules that will eventually make up Axiom Station – launching in 2024 and 2025 for the ISS.

They will also be the first commercial modules attached to the ISS, all previous modules were operated by national agencies such as NASA, ESA and Roscosmos.

Axiom isn’t the only commercial operator exploring the idea of a space station, both Virgin Galactic and Blue Origin have hinted at the prospect, although Sir Richard Branson said it was likely decades off.

Jeff Bezos, Blue Origin founder, has gone further, saying he would one day like to see heavy and polluting industry moved into Earth orbit.

The other possible client for a life support system to be used on an orbital outpost is the Gateway Foundation. They have proposed an artificial gravity station.

Developed by the Orbital Assembly Corporation (OAC), the Voyager Station could be operational as early as 2027, with the infrastructure built in orbit around the Earth.

It will feature a series of pods attached to the outside of the rotating ring and some of these pods could be sold to the likes of NASA and ESA for space research.

No details of cost to build the space station, or the cost of spending a night in the hotel have been revealed, although OAC say build costs are getting cheaper thanks to reusable launch vehicles like the SpaceX Falcon 9 and the future Starship. 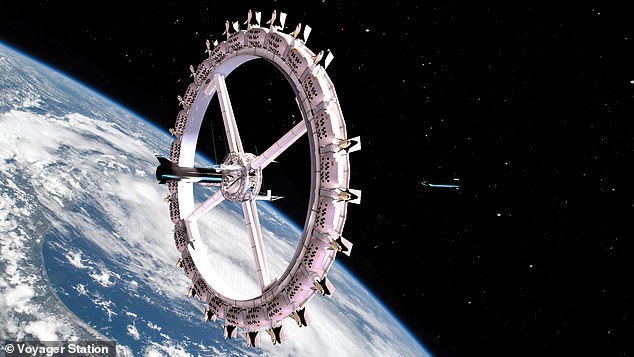 Developed by the Orbital Assembly Corporation (OAC), the Voyager Station could be operational as early as 2027, with the infrastructure built in orbit around the Earth 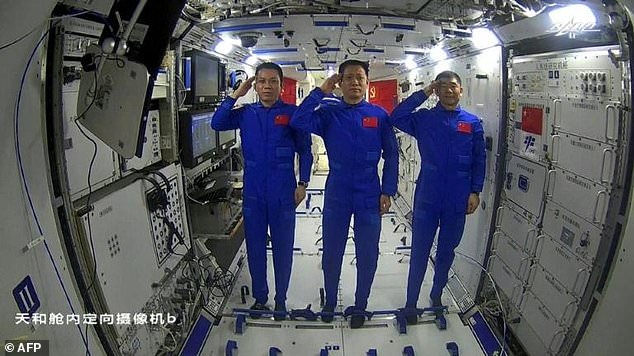 Not to be outdone by the commercial sector, both China and Russia are developing space stations in Earth orbit, as well as a planned station in orbit around the moon.

NASA is also developing a lunar orbiting station known as the Lunar Gateway, in partnership with ESA and JAXA, sometime before 2028.

The Russian space agency, Roscosmos, is launching its own space station in 2025 and as part of that will include a dedicated tourist module to house visitors.