NAB’s dire prediction of double-digit percentage drops, over two years, came as the Reserve Bank admitted its recent spate of interest rate hikes would cause a ‘small’ group of borrowers to default on their mortgages.

The RBA this week slapped borrowers with their sixth straight month rate rise bringing it to a nine-year high of 2.6 per cent, with inflation expected to soon hit levels last seen in 1990.

Rising interest rates have the potential to worsen mortgage defaults and arrears by slowing the economy, leading to higher unemployment and reduced wages as cost of living pressures intensify.

A sharp fall in house prices would also leave borrowers owing more than their home is worth – a situation known as negative equity.

In Sydney, where borrowers are particularly sensitive to interest rate rises, NAB is forecasting a 22.3 per cent fall over two years of $289,945.

Where house prices are falling

Alan Oster, NAB’s chief economist, said higher interest rates had ‘been the key driver in the fall in property prices’.

‘Indeed, the two capital cities most bound by affordability constraints – Sydney and Melbourne – have fallen the most,’ he said.

Rate rises are already biting, with Sydney’s mid-point house price diving by seven per cent in the three months to September to $1,283,502, CoreLogic data showed.

Melbourne’s median house price fell by 4.2 per cent during the September quarter to $937,131.

The RBA’s latest 0.25 percentage point increase means a borrower with an average, $600,000 variable rate loan will see their monthly repayments surge by $89 to $3,055.

In Sydney and Melbourne, where houses typically cost a lot more, borrowers are particular sensitive to rate rises, with 95 per cent of borrowers in some postcodes suffering from mortgage stress where they can barely pay their bills. 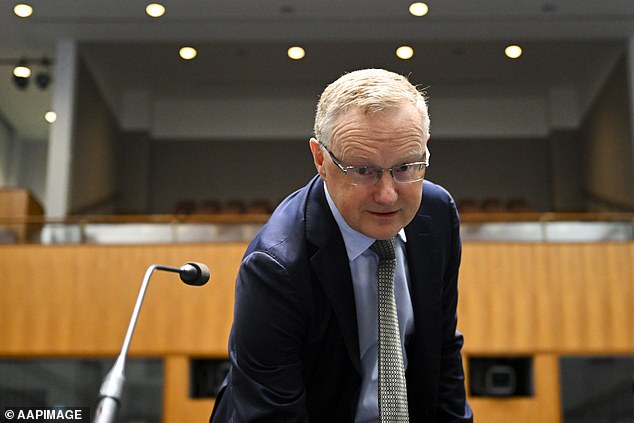 The RBA, which raised rates on Tuesday, released a new warning about mortgage defaults on Friday in its latest Financial Stability Review warning of borrowers struggling to repay their mortgage (pictured is Reserve Bank of Australia Governor Philip Lowe)

2560: 95.02 per cent stress level in an area covering Campbelltown, Leumeah and Airds in Sydney’s outer south-west

3806: 95.01 per cent stress level in an area covering Berwick in Melbourne’s outer south-east

6163: 94.92 per cent stress level in an area covering Samson and Bibra Lake in Perth’s south

The RBA released a new warning about mortgage defaults on Friday in its latest Financial Stability Review.

Borrowers are considered to have defaulted on their loan when they are 90 days or more behind on their repayments.

‘A small group of borrowers in Australia are particularly vulnerable to repayment difficulties due to rising interest rates and cost-of-living pressures,’ it said.

This would leave them with little savings or the ability to sell assets to have cash flow.

‘Many of these households have low liquidity buffers, low incomes and high debt relative to their income,’ the RBA said.

A slowing economy also dents after tax income, making it even harder for borrowers to service their loan.

‘A large decline in housing prices that results in negative equity for households, alongside further shocks to disposable income, would increase the risk that some borrowers default on their loan commitments,’ the RBA said.

The Reserve Bank also warned of a higher arrears rate where borrowers are 30 days or more behind on their mortgage repayment.

‘A small share of borrowers with lower savings and high debt are vulnerable to payment difficulties,’ it said.

‘As a result, housing loan arrears rates are likely to increase in the period ahead from currently very low levels.’ 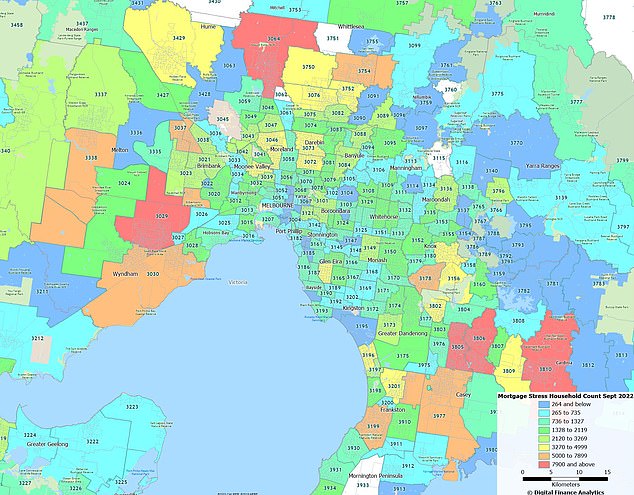 Digital Finance Analytics has revealed the postcodes where 95 per cent of borrowers are in mortgage stress where they don’t have enough cash flow to pay their bills and living expenses after making a monthly repayment. These hot spots included the Berwick in Melbourne’s south-east

Sydney’s borrowers typically have a $1million loan just to buy a middle-market house with a 20 per cent deposit.

That is 11 times an average, full-time salary of $92,030, which means only a working couple or a very high income earner can service a mortgage.

The Australian Prudential Regulation Authority, the banking regulator, considers a debt-to-income ratio of six or more to be dangerous.

Digital Finance Analytics has revealed the postcodes where 95 per cent of borrowers are in mortgage stress where they don’t have enough cash flow to pay their bills and living expenses after making a monthly repayment.

These hot spots included the Campbelltown area of Sydney’s outer south-west, Berwick in Melbourne’s south-east and Samson in Perth’s south in September, before the RBA’s latest rate rise.

‘To date, Sydney and Melbourne have led the declines, but prices in other capital cities now appear to have also peaked – and the decline in Brisbane has accelerated,’ he said. 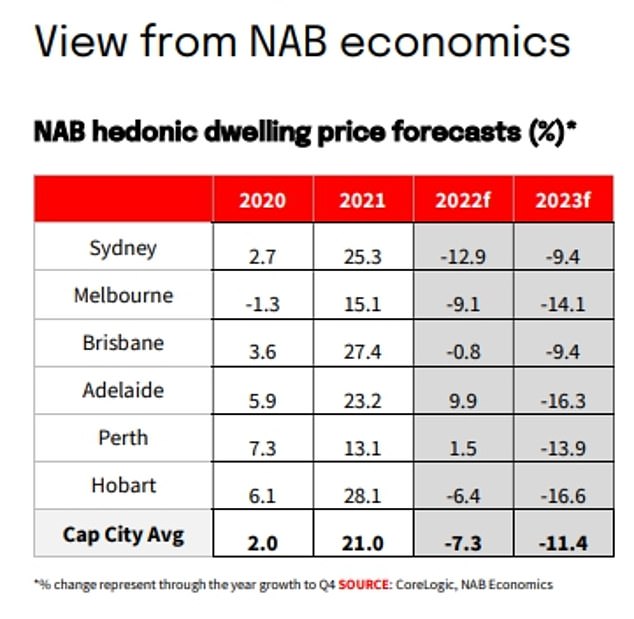 What the major banks are now expecting

The Reserve Bank noted a jobless rate of just 3.5 per cent was failing to translate into strong wages growth that could help borrowers deal with higher rates.

‘Despite a strong labour market, income growth has not kept up with inflation in Australia, leaving households with less capacity to service their debts,’ it said.

Australia’s inflation rate of 7 per cent in July was the fastest since 1990.

While it moderated to 6.8 per cent in August, it was more than double the RBA’s 2 to 3 per cent target as fruit and vegetable price surged 18.6 per cent in tandem with petrol prices soaring by 15 per cent. 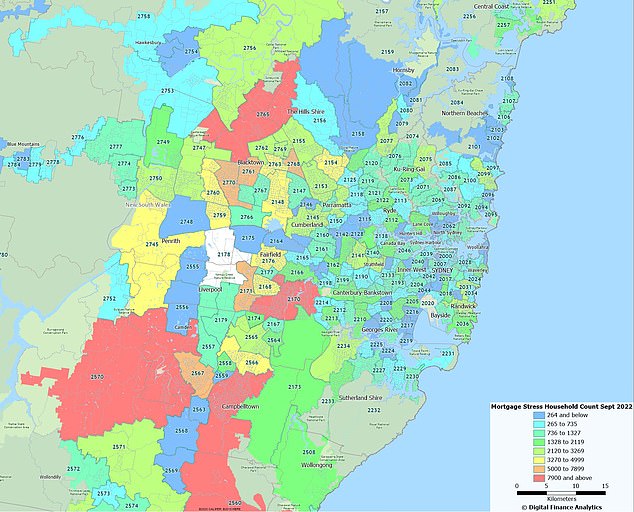 Wages in the year to June grew by just 2.6 per cent, which means most workers are suffering a cut in real wages adjusted for inflation.

‘Debt-servicing challenges will become more widespread if economic conditions, particularly the level of unemployment, turn out to be worse than expected and housing prices fall sharply,’ it said.

The latest RBA increase is far from the last with Westpac now forecasting a 3.6 per cent cash rate by February next year while ANZ has that level being reached in May 2023.

What a 0.25 percentage point rate rise in October will mean for you