The Loose Women panel have split opinion after debating whether children should be allowed to watch cartoons at nursery – with mother-of-two Nadia  Sawalha saying television was her ‘greatest parenting tool’ when her children were young.

Nadia was joined on today’s ITV show with Carole McGiffin, Brenda Edwards and Christine Lampard, with Carole, who has no children, branding TV ‘evil’ and saying she would never let her children watch it if she had any.

It comes after one mother took to Mumsnet to ask if she was being unreasonable  to complain about her son watching cartoons at his £1,200 a month nursery.

The anonymous UK-based woman wrote: ‘My almost 3-year-old has been attending the same nursery since we moved back to the UK from Australia last year.

‘I’m happy with the nursery and he really likes it there, his brother who is 18 months started going a few months ago and I’ve had no complaints however tonight when I picked him up he was sat with five other kids watching cartoons on a large computer monitor, this is the third night in as many weeks that this has been the case.

‘He watches TV at home of course, although we do try to be on the stricter side but regardless of that, am I being unreasonable to expect that he doesn’t watch TV at nursery?

‘I’m currently paying £1200 per month for them both to attend three days each as I work full time nightshift, kind of p****s me off to pay over a third of my salary to childcare and then find him sat watching TV.’

Shocked at the nursery, Brenda Edwards, who has two children, said:  ‘She said she monitors the TV when she’s at home and that’s down for a parent’s own responsibility when you’re at home, you do what you want to do.

‘At that age a child can pick up anything.

‘And the same way that you can sit a child in front of a telly and they watch cartoons, and they pick up those bad habits or whatever said cartoon is watching.

The Loose Women panel have split opinion after debating whether children should be allowed to watch cartoons at nursery – with mother-of-two Nadia Sawalha saying television was her ‘greatest parenting tool’ when her children were young.

‘That child will bring that home.

Carole added: ‘I’m not defending TV because if I had kids, they wouldn’t get anywhere near it, and I swear that that’s the truth. People go ‘you can’t say that you got kids’, no that’s exactly why I can say it.

‘I quite seriously. I worry about the television in the same way I worry about surveillance and CCTV because I think that, I think it can be a bit of an evil thing, I think.

‘I’m on television, as it is the fact that the fact that it has become such an important part of life and most people’s lives is very difficult to ignore and I do think that there are a lot of people and I think it starts at a very young age, people do believe everything that they hear on TV, everything and they’re so influenced by by the advertising by the subliminal messages that you get the dramas and in kids shows as well, is happening, and I’m 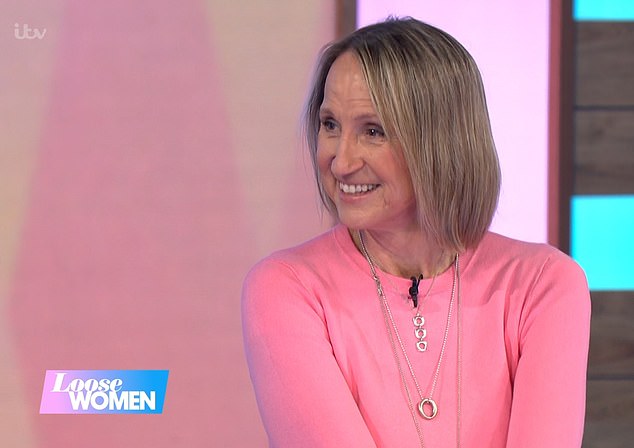 Nadia was joined on today’s ITV show with Carole McGiffin (pictured), Brenda Edwards and Christine Lampard, with Carole, who has no children, branding TV ‘evil’ and saying she would never let her children watch it if she had any.

Nadia hit back: ‘Well I know I get what you’re saying I love telly, I adore telling my parents used to remove the plug, they take the area we’d get a coat hangers we’d find a way to watch the telly.

‘And for me, it was what it was one of my greatest parenting allies.

Viewers had mixed opinions on the matter, with one writing: ‘Maybe they just pop on the TV at the end of the day when children have put all the toys away and waiting for parents #LooseWomen

Another added:  ‘Surely Nursery is all about interaction. Not TV. If your Nursery thinks occupying kids with TV is correct and beneficial or even just makes the adults life easier then you need to move them. #LooseWomen

A third commented: ‘My friend has a 3-year-old daughter who she banned from watching any TV.

‘She has now been diagnosed as a selective mute with the lack of TV being one of the issues. Educational children TV programmes are important for children’s development. #LooseWomen

Viewers had mixed opinions on the matter, with one writing: ‘Maybe they just pop on the TV at the end of the day when children have put all the toys away and waiting for parents #LooseWomen

Many people in the comments were saying a lot of nursery’s do this in the last 20 minutes/waiting for parents to pick up their children.

However, the mum went on to clarify that she had picked them up early at 4:45pm, as one of her children was ill, and that the nursery’s closing time is 6pm, so this was not an ‘end of day’ practice.

People were still divided, one user commented: ‘Our nursery does it with the last kids to be picked up, so 4:30pm onwards. If it was during the day it would annoy me I think.’

Another user replied: ‘YABU (you are being unreasonable). They’ve been running about with lots of mental stimulation all day, I’d be quite happy for mine to have a little wind down time watching tv just before I picked them up.’

‘So long as it’s not all day, I wouldn’t mind.’ Said another, they added: ‘It’s hard work looking after tinies especially when they’re super excited, so it’s a good idea for everybody to have a little break and calm down.’