Nameberry: These are the seven ‘unique’ baby name trends you need to know about for 2023

Experts have listed the seven ‘unique’ baby name trends for your little one for 2023, and there isn’t an Oliver, Noah, Charlotte or Olivia in sight.

The teams from parenting websites Nameberry and The Bump said there will be seven different themes for monikers for baby boys and baby girls in the next 12 months.

These include a return to retro names, names with a sci-fi influence and monikers that are inspired by the colours blue and green.

But one of the most interesting trends is the ‘4-2-i formula’, which means names with four letters, two syllables and ending in ‘i’ like Indi.

Experts have listed the seven ‘unique’ baby name trends for your little one for 2023, and there isn’t an Oliver, Noah, Charlotte or Olivia in sight (stock image)

What is your favourite baby name trend for 2023?

According to The Memo, the first baby name trend you can expect to come to a daycare centre near you is the ‘maximalism’ trend.

Names that fall under this bracket include monikers like Amadeus, Cleopatra, Magnus, Oberon, Ophelia, Persephone, Venus, Wolfgang and Zebedee.

‘These are names that give confident, main character energy,’ The Memo stated.

The names mark a clear shift away from Marie Kondo and minimalism, and a return to grandness inspired by TV shows including Bridgerton and House of Dragons.

If you want to find a unique option, The Memo recommends looking to mythology, legends, history, fantasy, literature and ‘even anime’.

‘This is the return of the 80s names. Are you surprised? Kate Bush is back at number one. Kitchens are green again. Yes, Stranger Things is largely responsible,’ The Memo wrote.

If you want to give your new baby a retro name in 2023, experts advise looking at your parents’ circle of friends and carefully considering each of their names.

It’s worth remembering that traditional boys’ and girls’ names do not apply now either, with the experts saying that ‘grandpa names’ like Lenny, Lou, Clarke, Ozzie and Rudy now work for baby girls just as well as baby boys.

The third trend set to make it big is the trend for ‘gilded’ names inspired by gold, brightness, lavishness and the sun.

If you’re considering a gilded name in 2023, think about adjectives for the sun and name accordingly.

When it comes to ‘sci-fi cowboy’ inspired names, more is more.

The Memo said the popular TV show Yellowstone has helped to raise the profile of sci-fi cowboy names like Dutton and Ennis. 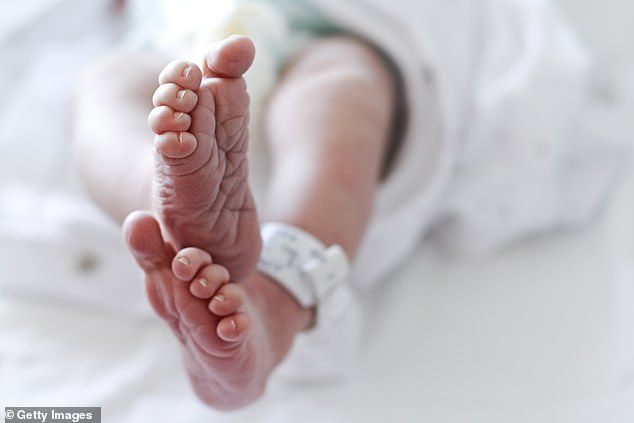 One of the more unusual trends for the next 12 months is the ‘4-2-i’ formula, which means names constructed with four letters, two syllables and ending in ‘i’ (stock image)

One of the more unusual trends for the next 12 months is the ‘4-2-i’ formula.

‘These names are constructed with a very specific formula: Four letters, two syllables and ending in “i”,’ The Memo outlined.

The reason why these names are increasing in popularity, the experts said, is because they are at the same time unusual, but recognisable and unlikely to get shortened.

They also have a ‘cultural transience’, meaning they work in many languages and different cultures.

Sixth on the trend list is the rise of adjectives as names.

While this is predominantly a celebrity trend at the moment, in 2023 the experts predict it will hit the mainstream.

Finally, parents will be giving their kids names inspired by blues and greens in 2023.

‘Blues and greens are calming, peaceful names which hopefully manifest a child with a similar disposition,’ The Memo outlined.

If you’re into the ocean or nature, they could be just the right fit for your child.

Previously, Nameberry shared the 23 ‘rising star’ names set to be big in 2023.

Top of the list was the boys’ name Alden, but many Nameberry experts said it works for a girl as well as a baby boy.

‘I’ve seen quite a few parents considering this handsome name lately – mostly for their sons, but it could easily work for a girl too,’ Nameberry said.

In a similar vein, the experts highlighted Archie as a choice that’s growing in popularity, not least thanks to the influence of Prince Harry and Meghan Markle’s eldest son.

One of the growing trends in baby names in recent years is giving girls boyish nicknames like Charlie and Frankie, and for this reason the name Billie for a girl is set to be big in 2023.

The Nameberry experts said traditional boys’ names including Noah and Halston will be big for little girls next year.

The list was rounded out with some more traditional options including Celeste, Louise and Rose, as well as more modern choices like Tru, Romy and Wilde.

Baby names of 2022 – the trends that have been big

ONE NAME, WORDED MANY WAYS

In recent years, the creativity has spanned through the emergence of similar names which are worded different ways. This is seen in Zoe (18th) and Zoey (100th), Sophia (20th) and Sofia (39th) and Amelia (4th) and Emilia (54th), highlighting that girls’ names vary creatively.