An Australian man has been banned from driving a car for the rest of his life after racking up a horrendous record that includes having his licence disqualified 16 times and almost dying while being high on meth behind the wheel.

Keith Norman Middleton, 23, will never be legally allowed to drive again after an unimpressed magistrate was read his lengthy record of offences in a Queensland court on Friday.

The South Burnett Times reported that Middleton pleaded guilty to a series of offences including driving an unregistered vehicle while he was disqualified, dangerous driving while high on drugs, possessing dangerous drugs and utensils, and four other charges from July 2, 2021.

Middleton appeared via video-link from prison at Murgon Magistrates Court on Friday, with Magistrate Michael Holohan told he was high on meth when he swerved into the opposite lane and crashed into a tree last year.

Keith Norman Middleton, 23, (pictured) will never get behind the wheel again after a list of his wide-ranging traffic offences was read out to Murgon Magistrates Court

Middleton, from the town of Nanango about 150km northwest of Brisbane, was  driving on the Bunya Highway towards Wondai when he crossed into the path of an oncoming vehicle, the court reportedly heard. 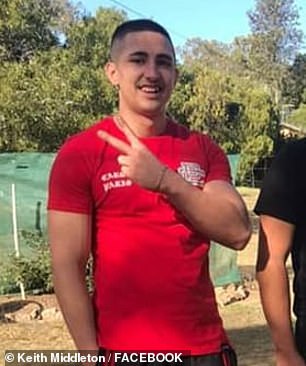 Police prosecutor Barry Stevens reportedly told the court that Middleton had crossed over the line into the path of an oncoming vehicle, before quickly moving back onto the gravel shoulder.

Another driver told police that Middleton appeared to be ‘almost asleep’ at the time, the court was told.

Middleton swerved into the path of another car and then again, sideways, into a tree, the court heard.

Middleton was pulled from the vehicle by first responders and rushed to Princess Alexandra Hospital in a critical condition.

He sustained serious brain injuries and remained in a coma for weeks.

On top of his appalling driving record and the devastating crash, Middleton has reportedly been jailed 13 times and pinged for a series of other offences.

The prosecutor said his traffic offending history was the worst he’d ever seen and that Middleton needed to prove to the community that he deserved the privilege of holding a licence.

According to the Times, defence lawyer Jay Rose said his client had been taking methamphetamines daily at the time of the accident and had always struggled to hold down a job. He has also completed a drug and alcohol course, the court was told.

Magistrate Michael Holohan disqualified the 23-year-old from driving for life and sentenced him to 18 months’ imprisonment.

Queensland courts have discretion in how long they disqualify drivers who are convicted of dangerous, drink or drug driving, depending upon the seriousness of the offence and a person’s traffic history.