A nanny who ‘really hated’ her boss while she looked after his children has revealed they ended up having an unlikely romance, despite their 20-year age gap.

Krystle Romano, 30, from New York, started working as a nanny for single father-of-three, Ben Romano, 50, who works in real estate, in October 2014.

She looked after his children, Francesca, then 14, Juliana, then 12, Salvatore, then 10, for a few months and initially said she didn’t like her new boss but stayed because she loved his children.

In fact Krystle admits she found her employer ‘rude and arrogant’ as he avoided contact with her and only communicated through his eldest daughter.

Meanwhile Ben’s first impression of Krystle wasn’t much better, as she arrived 12 hours early for her job interview after mistaking 7pm for 7am.

‘She was not a good nanny – she did the bare minimum, she never cooked homemade meals,’ Ben said.

‘She would usually turn up at 6.30am looking like she had been at the disco the night before, she wore high heels and short dresses, her hair was a mess.’

The father-of-three admitted that at first he kept his distance – however his head began to turn when she arrived at work one day ‘dressed up really nice’.

He recalled: ‘I thought “No Ben, don’t mix business with pleasure”.’ 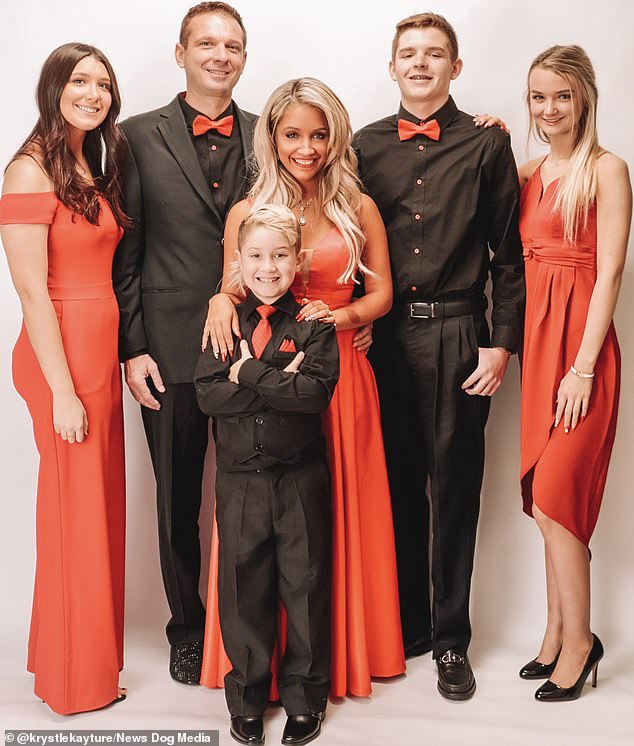 Still, he was unhappy with the job Krystle was doing and told his children they needed to find a new nanny.

His eldest, Francesca, would reply: ‘But daddy she makes me so happy, she does my make up.’

Ben gave Krystle the benefit of the doubt and after one fateful night of late-night texting, three months into her employment, their relationship became intimate. 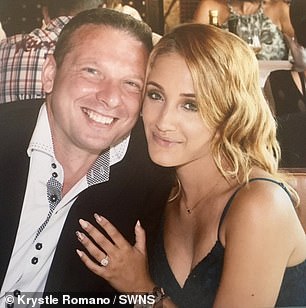 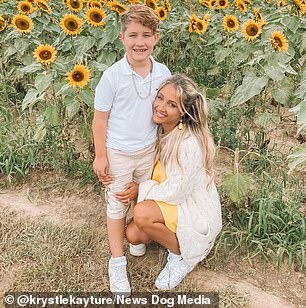 Krystle is mother to 10-year-old Kashton (pictured right), who was thrilled when he was told that she was marry Ben (left) 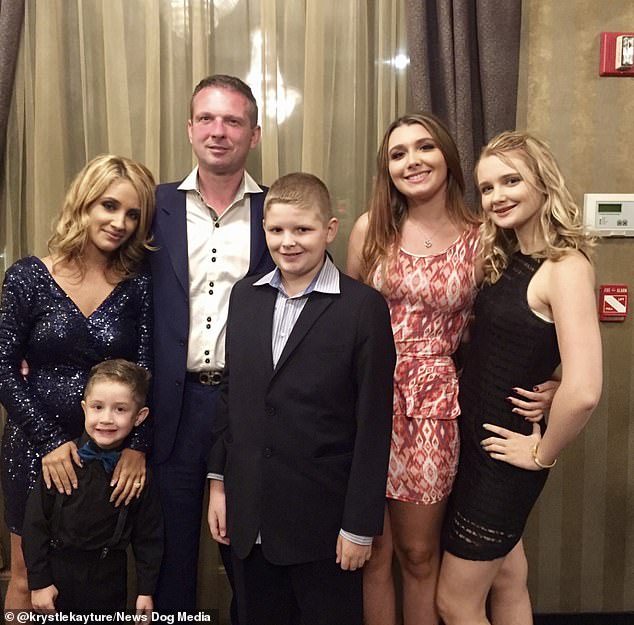 Ben kept his distance from Krystle at first, until one night of texting sparked their romance. Four months later he invited the nanny and her son to Christmas. Ben Romano, 49, with his wife Krystle, 29, (left) who is with her son Kasthon. And Ben’s three children to his left, Frankie, Sal and Julianna

They embarked on a secret relationship for four months and Krystle, who grew up in a strict religious household, initially enjoyed the excitement of sneaking around and didn’t think it would materialise into anything serious.

However the mother-of-one, who has a 10-year-old son, Kashton, from a previous relationship – quickly fell head-over-heels for Ben and their relationship became intense.

Krystle, who now works as an eyelash technician, said: ‘Honestly, we really hated each other, I don’t know how it turned into love. 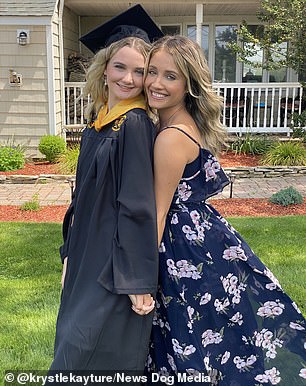 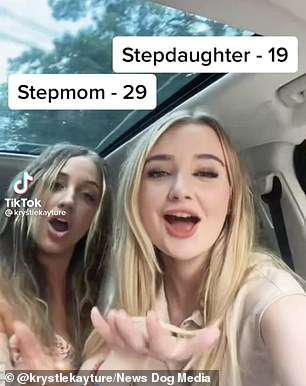 Ben kept telling his children that they needed a new nanny as Krystle wasn’t good at her job but his children loved her. She is pictured here with Julianna 19. Ben’s eldest daughter Frankie, 22, is only seven years younger than her stepmother

‘At first, I just enjoyed being naughty for the first time ever in my life.

‘I texted him when his kids went to Florida to check they had gotten there safely but the next thing I know we were texting until 4am.’

When Christmas came around in 2014, Ben invited Krystle and her son to celebrate with his family and it soon became clear that their relationship was developing into something more serious.

Before the children knew about the relationship, they even joked their fahter should date their nanny.

When they did eventually reveal the romance to their loved ones, Krystle’s family was thrilled – but Ben’s took a little more convincing due to Krystle being 20 years his junior.

Despite initial jokes, Ben’s children took some time to warm to the relationship – however they are accepting now, and want their father to be happy.

Ben proposed to Krystle on a gondola in Venice, Italy, in July 2016 and the pair tied the knot in an extravagant ceremony in front of 300 guests in Long Island, New York City, US, in November 2017. 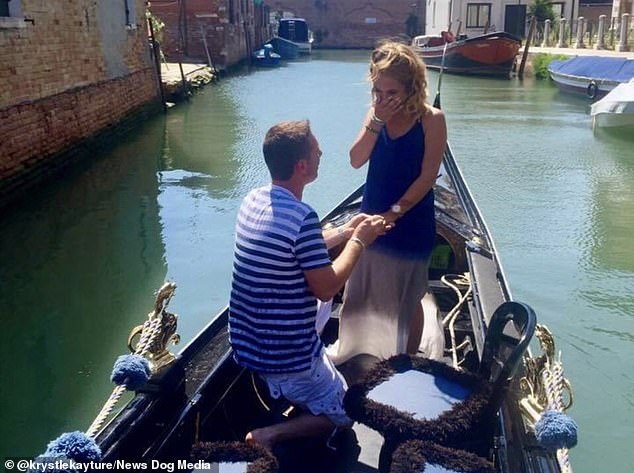 Ben Romano proposing to Krystle in Venice, Italy back in July 2016, two years after the pair first met 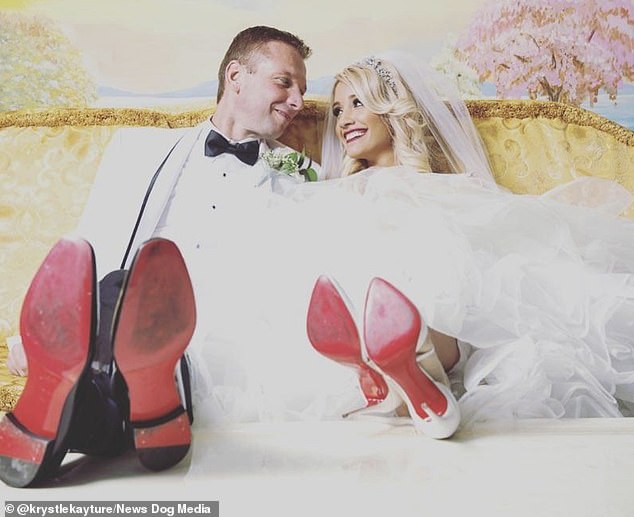 Krystle Romano with husband Ben on their wedding day in 2017. The pair held an extravagant ceremony in front of 300 guests in New York 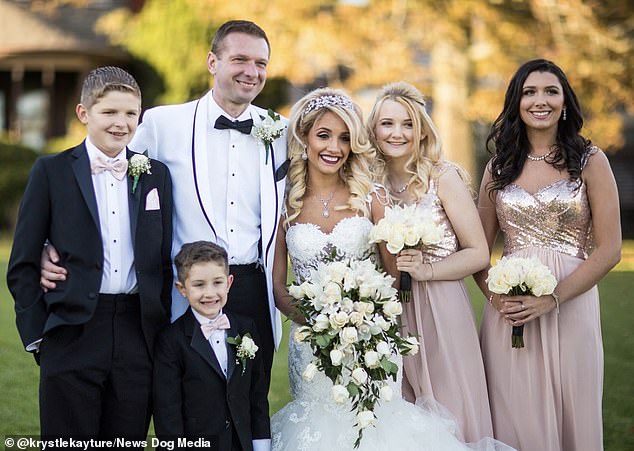 It took a bit of time for Ben’s children to warm up to the idea of Ben and Krystle being together, but they are pictured here smiling on their wedding day in 2017. L-R: Sal, Kashton, Ben, Krystle, Juliana and Frankie

Ben said: ‘At first I was apprehensive because I didn’t want to mess up the household dynamic, but we complement each other so well and she has never done anything wrong in my eyes, she is a solid good person.’

People accused Krystle of being a ‘gold-digger’ and using Ben for his money.

Someone once commented: ‘When he’s 70 and you’re changing his diaper – you’ll see how you feel.’

In the beginning people even mistook Ben for Krystle’s dad – but now people are aware they are in a romantic relationship and she has learnt to laugh off negative comments.

Without make up, Krystle says she looks like a teenager, so their age gap is even more obvious, but it doesn’t bother them in the slightest. 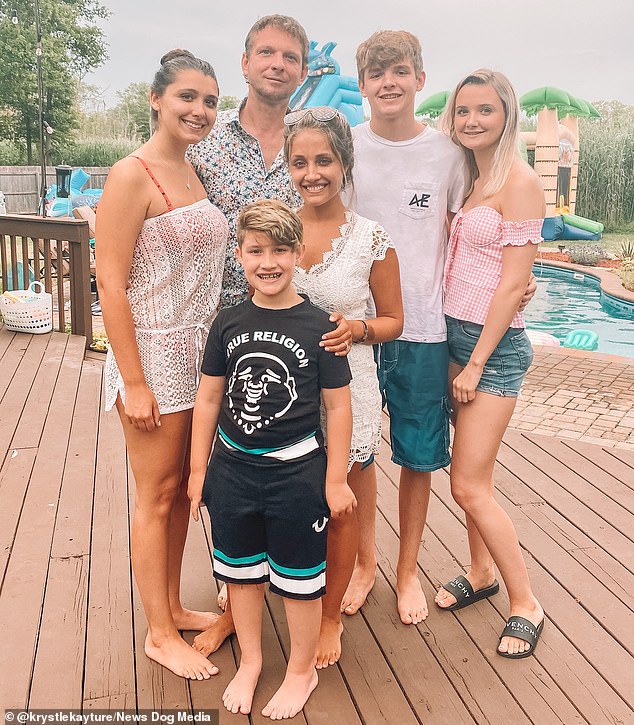 The family are all happy together and Krystle hopes to have another baby, but Ben is yet to be swayed

‘We just laugh it off, you can’t really listen to what other people think, it will put a huge strain on your relationship,’ Krystle said.

Ben added: ‘I quickly realised she’s a good person and she has a good heart, she has never let me down.

‘Everyone was sceptical at first because she’s a young woman and they didn’t think it would last.’

The couple joke they are complete opposites because Ben is the young party animal and Krystle’s idea of fun is a good night’s sleep.

Krystle is hoping to have another baby, but Ben is yet to be swayed.

‘We really are best friends, besides partying, we like to do the same things, we love going on holiday and trying new food,’ said Krystle.

‘I think we balance each other out and that’s what makes us work so well.’