She co-hosted one of the hottest events in town on Sunday in true head-turning fashion.

And now Naomi Campbell, 47, was back to her old style tricks as she showcased not one but two different ensembles on Monday night while attending the LOVE x Miu Miu Women’s Tales dinner hosted by Katie Grand and Elle Fanning at Loulou’s.

The supermodel turned heads in a vibrant orange creation as she arrived to the star-studded bash, hours after wowing in a kooky gold gown to celebrate the Commonwealth Fashion Exchange at Buckingham Palace earlier in the evening.

Stepping out: Naomi Campbell, 47, was back to her old style tricks as she showcased not one but two different ensembles on Monday night while attending the LOVE x Miu Miu Women’s Tales dinner hosted by Katie Grand and Elle Fanning at Loulou’s 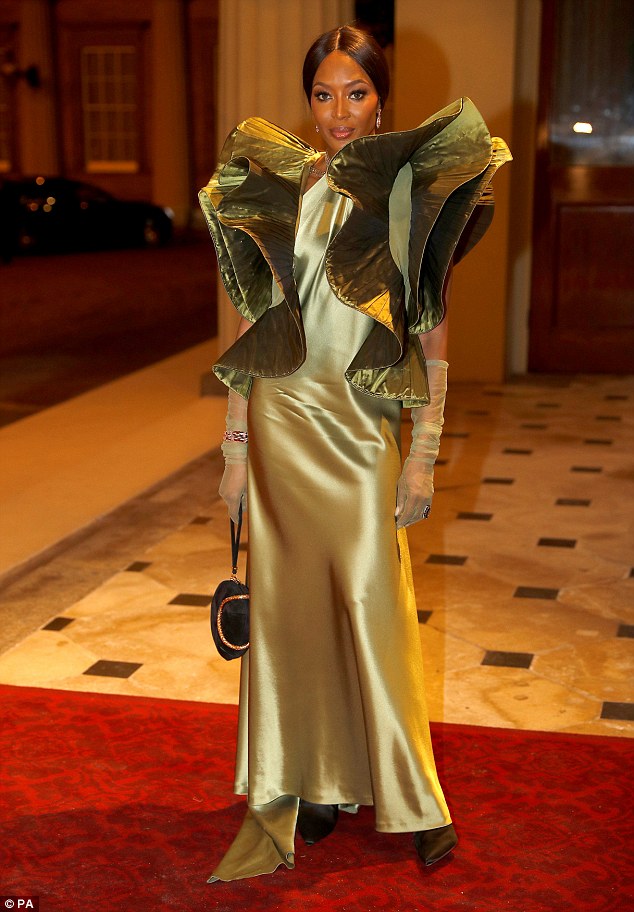 Going for gold: The supermodel in a kooky gold gown to celebrate the Commonwealth Fashion Exchange at Buckingham Palace hosted by the Duchess of Cambridge and Countess of Wessex earlier in the evening

Not one to shy away from pushing the fashion boundaries, Naomi’s vibrant choice overshadowed her statuesque frame as she arrived to her second party of the evening.

Boasting endless tiered frills and ruffles, the runway icon teamed the eye-catching attire with a pair of knee high boots while accessorising with a pair of oversized shades, despite it being night time.

Her trademark locks were worked into a sleek straight style while she carried her crushed velvet handbag arriving to the soiree. 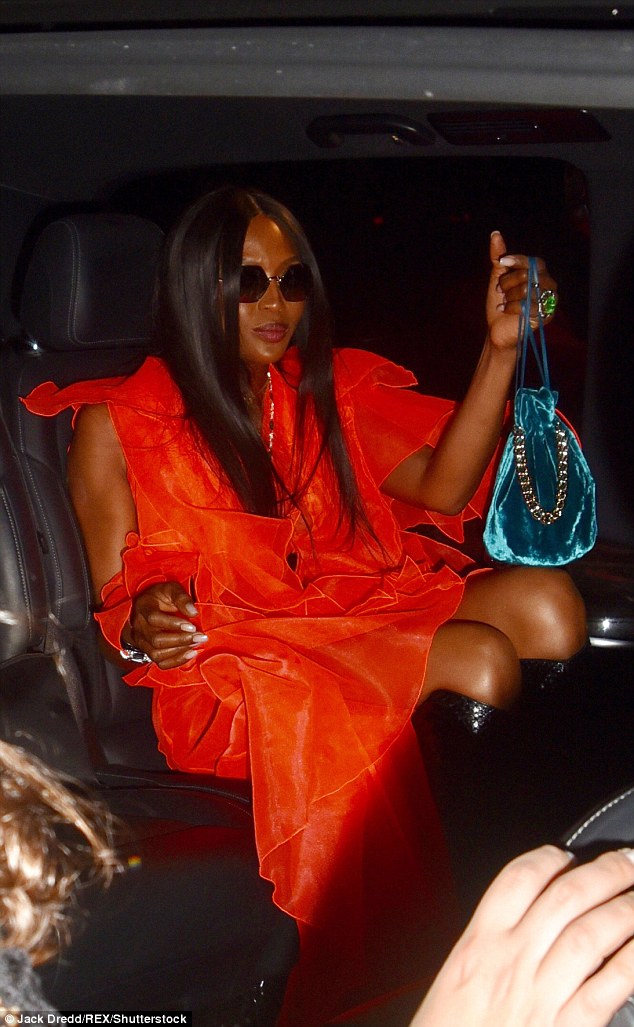 Runway ready: Not one to shy away from pushing the fashion boundaries, Naomi’s vibrant choice overshadowed her statuesque frame as she arrived to her second party of the evening 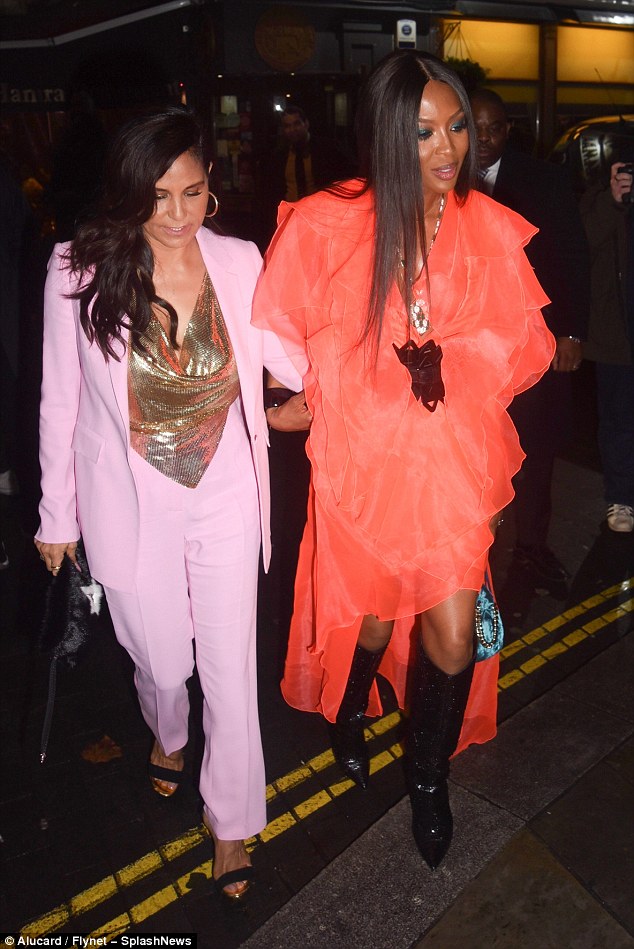 Pink to make ’em wink: Naomi arrived with a stylish pal clad in a pink suit for the event 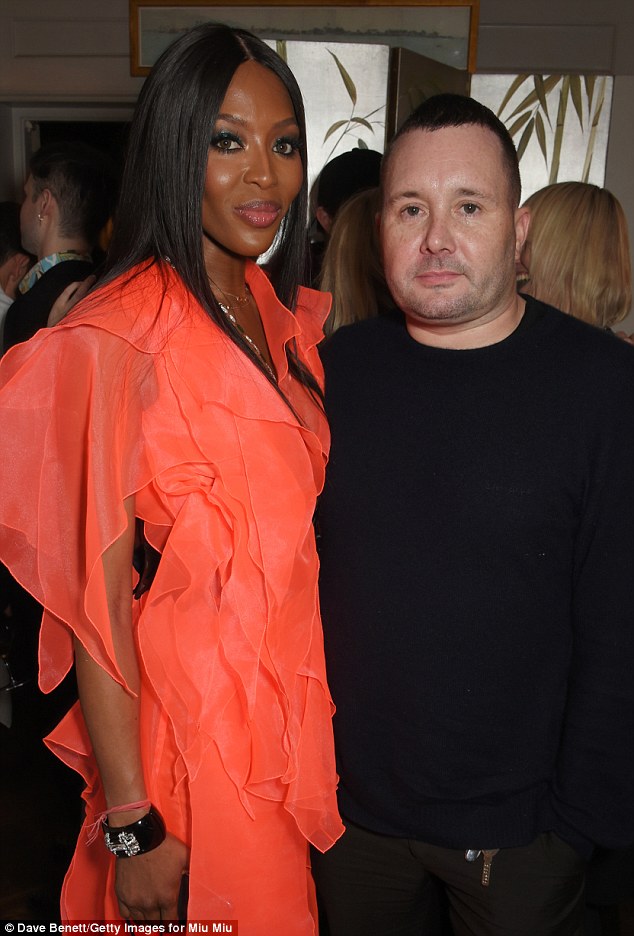 Posing up a storm: She posed with fashion designer Kim Jones inside the star-studded bash

Naomi’s latest sartorial display comes after she wowed the style brigade at her royal engagement earlier in the evening, wearing a striking silk floor-length number.

She teamed the slinky number with a pair of sheer long gloves and black clutch.

The fashion star continued her glamorous appearance as she worked her glossy locks into a chic up ‘do. 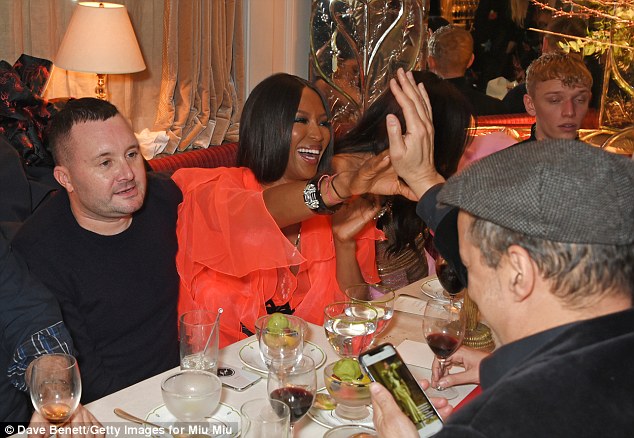 Having a laugh: The pals caught up of a spot of dinner at the VIP soiree 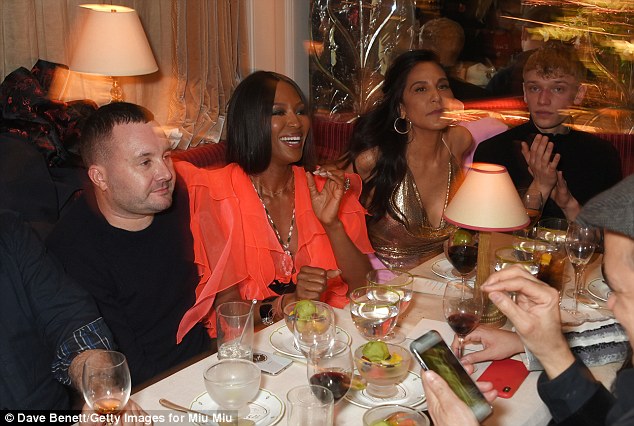 Party pals: Naomi appeared in jovial spirits as she was surrounded by pals at the party

Slinky: Naomi’s latest sartorial display comes after she wowed the style brigade at her royal engagement earlier in the evening, wearing a striking silk floor-length number 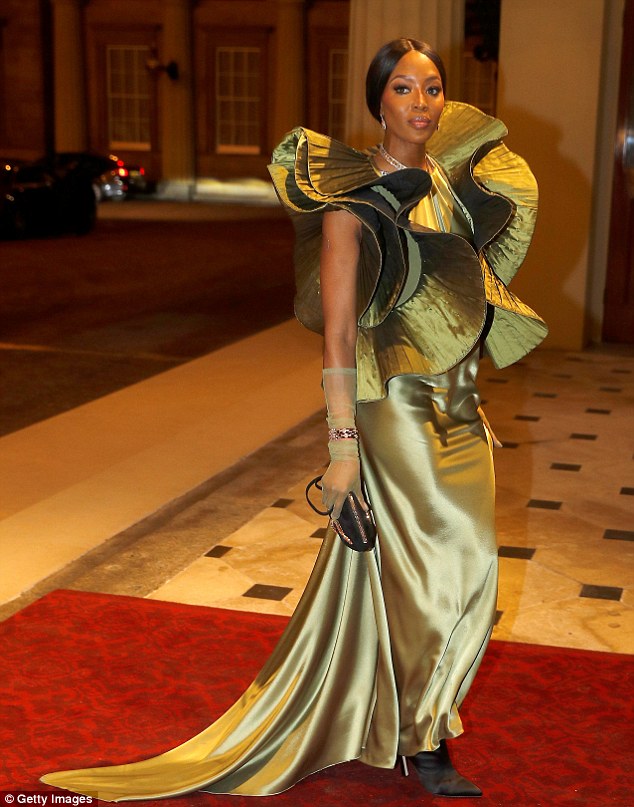 All in the details: Her fashion forward look boasted head-turning 3D ruffle embellishment that added incredible volume to her formal attire

For the past few weeks, speculation has been rife that she’s embarked on a romance with grime artist Skepta – but she’s yet to confirm the claims.

And Naomi only intensified the rumours  last week, when she reportedly opted to skip Liam Gallagher’s NME Awards afterparty just minutes after arriving – as did the 35-year-old rapper.

According to The Sun, the supermodel and the musician ‘hopped into the same car to head home together’ after arriving at and departing the bash – held at the The Ivy in south-west London – separately.

The newspaper reports that Naomi spent just 11 minutes at the celebratory gathering, while Skepta, real name Joseph Adenuga, was there for just a fleeing single minute.

And it was clear to see why the British beauty would have caught the musician’s eye, as she looked incredible for the ceremony in a semi-sheer black mini dress which accentuated her statuesque frame as she presented the Best Album honour to J Hus.

Her chic thigh-grazer featured a plunging neckline which drew attention to her cleavage and decolletage while the tiered frill skirt highlighted her slender pins.

Looking effortlessly chic, she teamed the look with a pair of knee-high boots which added an edge to her flirty ensemble as she presented English rapper J Hus with an honour for his album Common Sense.

The runway queen styled her raven-coloured locks into a wave while her fringe framed her flawless facial features, while her rumoured beau sat in the audience after picking up the Innovation Award for his independent label Boy Better Know.

At the time, MailOnline have contacted Naomi Campbell’s rep for comment.

Her surprise appearance at the awards comes after it was reported that she was romancing rapper Skepta.

The stunning supermodel and rapper were seen getting cosy at not one, but two Paris Fashion Week parties last week.

A source close to the fashionista revealed to The Sun : ‘Naomi and Skepta have been meeting up for a string of secret dates. They are both very creative which is why they have hit it off with each other.

The model and Mercury Prize winner reportedly first caught each others eye when they were introduced by mutual friends, and while things are reportedly going well, they are taking their relationship ‘very slowly’.

Skepta – real name Joseph Junior Adenuga – hasn’t been shy of showing his affection for the much-lauded model, posting a picture of the pair on his Twitter page in October, adorned with a heart emoji.

He also sang her praises to The Sun in June, saying that fashion icon was his ‘favourite cover girl’ and ‘she broke down boundaries by doing those early Vogue covers’.

Her appearance comes after she recently opened up about how she always felt ‘self-conscious’ about her body – despite a number of nude magazine shoots and walking the catwalk in lingerie.

Speaking on Good Morning Britain last month, the size eight model, said she was so uncomfortable she would cover her figure in baggy clothes when she went out.

She shared: ‘I’ve always been self-conscious of my body. If I wore something tight, I had to wear a cardigan around my waist just to cover my back.’

The star, who was scouted at 15, added: ‘As I’ve gotten older I’ve felt a bit more comfortable in my skin but it took me years doing pictures with lingerie. I felt so uncomfortable.’