Narcolepsy causes woman to pass out every time she laughs

A woman’s rare neurological disorder causes her to pass out every time she laughs or cries.

Sam Hart, 20, suffers from narcolepsy, which has left her ‘robbed of her independence’ and with ‘hardly any quality of life’.

Ms Hart, who is also on the autistic spectrum and suffers from severe anxiety, is unable to take medication for her disorder after its side effects left her with an uncontrollable urge to stab people and start fires.

Cared for by her mother Angie, 44, from Luton, Ms Hart, who falls asleep up to seven times a day for a total of 21 hours and wakes with no memory of before, is even afraid to have a bath in case she drowns.

The mother-of-three said: ‘This really is no way for her to live. She’s nearly 21, but she can’t do any of the fun things young women her age should be enjoying.’

Angie and her husband Earl, 52, who also cares for Ms Hart, are speaking out to raise money towards installing specialist lighting in her room to help change her mood.

Narcolepsy affects around 30,000 people in the UK. 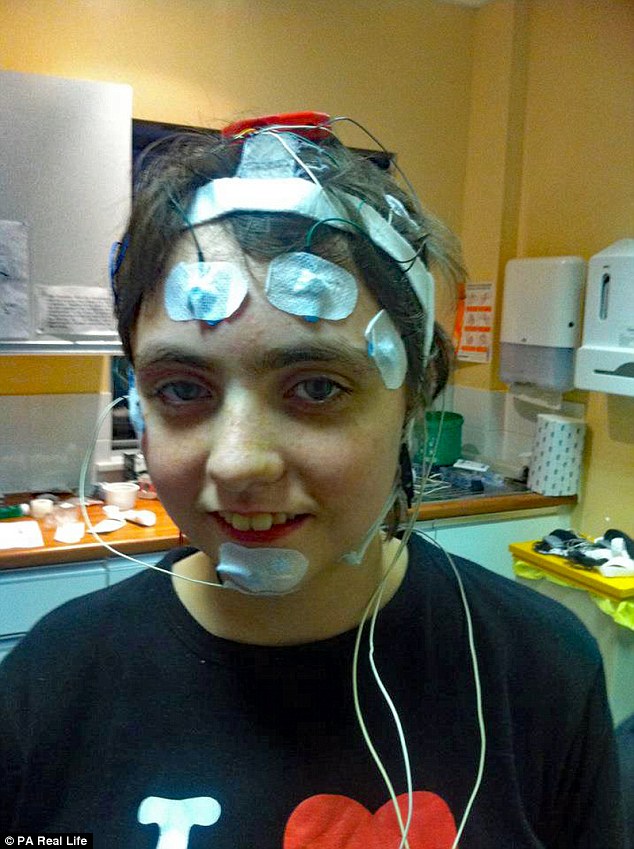 Ms Hart (pictured while participating in a sleep study) suffers from narcolepsy, which has left her ‘robbed of her independence’ and with ‘hardly any quality of life’ 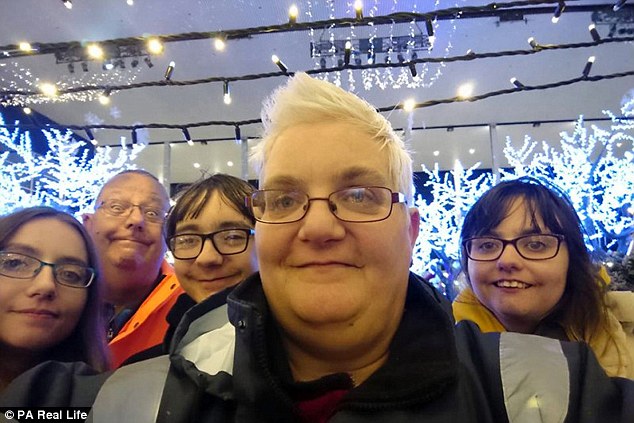 Ms Hart (pictured far right with her sister Chloe, 18, mother’s husband Earl, 52, brother Daniel, 14, and mother Angie, 44 [l-r]), who is also on the autistic spectrum and suffers from severe anxiety, is unable to take medication for her disorder after it made her want to stab people

Speaking of her daughter’s condition, Angie said: ‘She has hardly any quality of life.

‘She’ll wake up at about 10pm and be alert for around three hours. The rest of the time, she’s asleep.

‘If I tell people she has narcolepsy, they are very sympathetic, but if she has one of her sleep attacks in public, when she wakes up, she is sure everyone’s staring at her.

‘She’s tried four different types of medication, which she had to stop, because they made her mental health so bad and she started setting fire to things, wanting to stab people and hearing voices in her head telling her to do bad things.’ 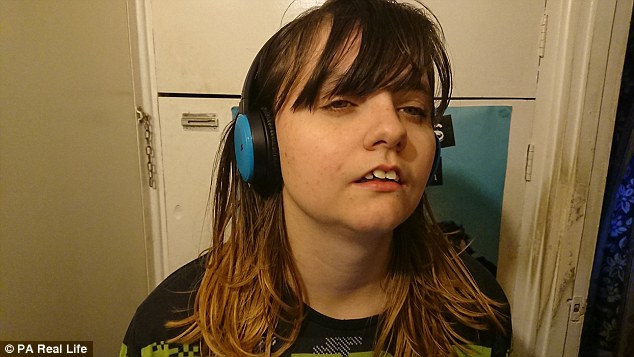 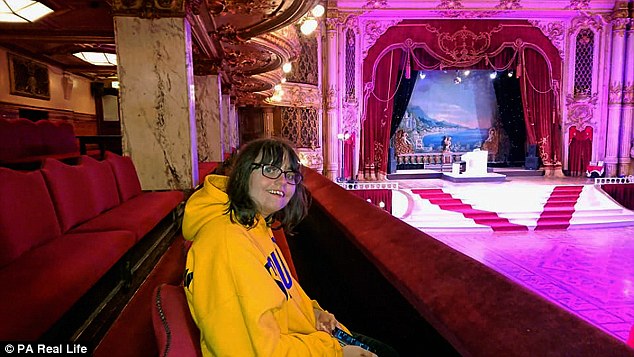 Narcolepsy is caused by lack of the brain chemical hypocretin, which regulates wakefulness.

This is thought to occur due to the immune system attacking cells that produce hypocretin or receptors that allow it to work.

It can also be triggered by hormonal changes, stress and infections.

Sufferers are advised to have frequent naps throughout the day and stick to a strict bedtime routine.

Medication can help to reduce daytime sleepiness and prevent loss of muscle control.

‘Poor Sam has so many health difficulties’

Speaking of her aspirations for her daughter’s treatment, Angie said: ‘Our big hope now is an appointment she has in March to see a neurologist, who we hope and pray will be able to do something.

‘Her attacks only last for about 10 minutes each, but they happen all the time, so she can’t go out on her own, as she literally falls unconscious, making her extremely vulnerable.

‘She can do this five, six or seven times a day and, while she remembers her dreams, she does not remember falling asleep or what she was doing before it happened.

‘We have been warned that she could now start sleepwalking, too, so I’m just hoping and praying the neurologist can find something to help her.

She said: ‘I’ve been told there’s a new drug available, but only in certain counties, so I’m just hoping she will be able to try that.

‘Then, maybe the rest of the family will be able to sleep soundly, at last, too.’

Speaking of her and her husband’s plans to upgrade Ms Hart’s room, Angie said: ‘Poor Sam has so many health difficulties, we want to make her room a safe haven for her.

‘We even had to rip the bath out, as she was worried she might drown, and put a wet room in for her.’ 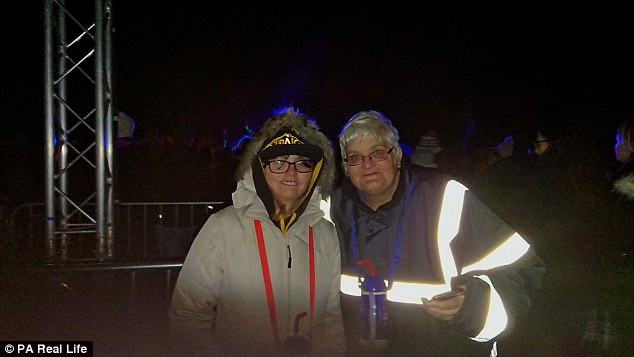 Angie, who cares for Ms Hart, says it is not safe for her daughter to go out by herself 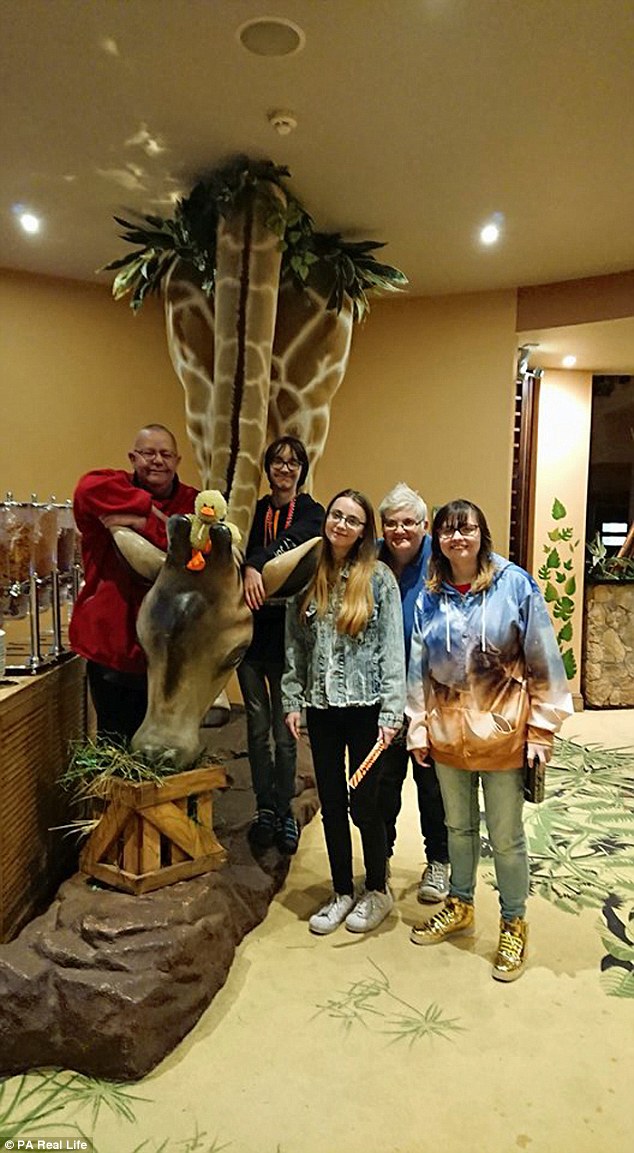 ‘She used to be called “lazy”‘

Angie, who is also mother to Chloe, 18, and Daniel, 14, first noticed Ms Hart’s symptoms when she was at school.

She said: ‘She used to fall asleep at school and teachers would ask me, “When does she go to bed?”

‘I’d say, “It’s lights out at 9pm, like other kids”, not really understanding why they were asking me.

‘I now know she used to get up a lot in the night, but she’d be so quiet that I didn’t realise at the time.

‘She used to be called “lazy” and accused of not concentrating at school, but she was clearly just half asleep.’

Ms Hart was finally diagnosed when she was around 15 years old after she fell asleep on the floor and sent her mother into a complete panic.

Angie said: ‘I just didn’t know what was happening.

‘It was very frightening, but she didn’t remember anything about it afterwards.’

To donate to Sam’s fund here.