A stunning image showing the bright lights of London has been captured by a NASA astronaut on the International Space Station.

The photograph was taken by Jessica Meir from the window of the station and shows the Thames weaving a dark path through a web of bright lights.

‘Behold the bright lights of fair London town! Views of city lights from above evoke images of spider webs, shattered glass, or fractal art’, Dr Meir said in a Tweet.

‘Many fond memories with my relatives and friends in this lovely city – thinking of you all from low Earth orbit.’

The image was taken at about 8:41pm GMT on the 20th of November as the International Space Station was flying over the United Kingdom.

It was tweeted on the 26th of November by Dr Meir who reflected on ‘fond memories’ she had of her time in London.

She talked about enjoying spending time in the UK capital with relatives and friends. and said she was thinking of them ‘from low Earth orbit’.

The brightest spots are in the City of London and Canary Wharf, while the Thames, which resembles a black snake, cuts the capital in two.

Meir left Earth for the International Space Station on the 25th of September to work as a flight engineer.

She performed her first spacewalk in October alongside Christina Koch to replace a faulty battery charging discharging unit.

While on the walk the pair each took a ‘selfie’ of them inside their spacesuit to commemorate the first all-female spacewalk.

The first woman to complete a spacewalk was Russian astronaut Svetlana Yevgenyevna Savitskaya in 1984 – a total of 15 women have ever spacewalked, including Meir and Koch 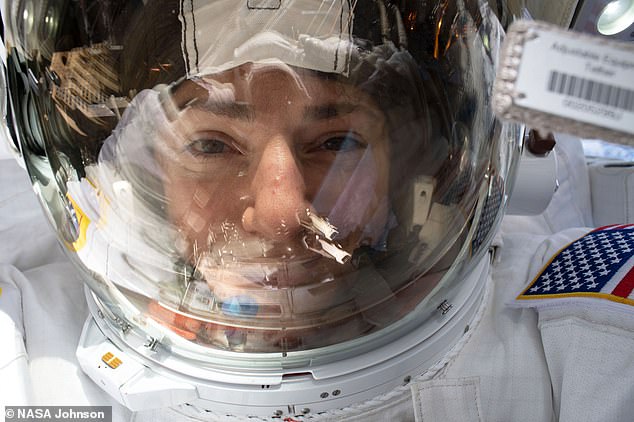 On Friday, October 18th, Koch and Meir (pictured) ventured outside of the International Space Station (ISS) at 07:38am ET (12:38pm BST) to begin the first all-female spacewalk ever. The selfies show the pair fixing parts of the ISS and floating weightless in space

Meir is expected to return to Earth sometime in the Spring of next year when her tour as part of Expedition 61 and 62 comes to an end.

Due to holding dual American and Swedish citizenship she is the first Swedish woman to go into space.

You can see the ISS from Earth on a clear night. It’s the third brightest object in the night sky and easy to spot if you know where and when to look up, NASA says.

‘Visible to the naked eye, it looks like a fast-moving plane only much higher and traveling thousands of miles an hour faster!’ 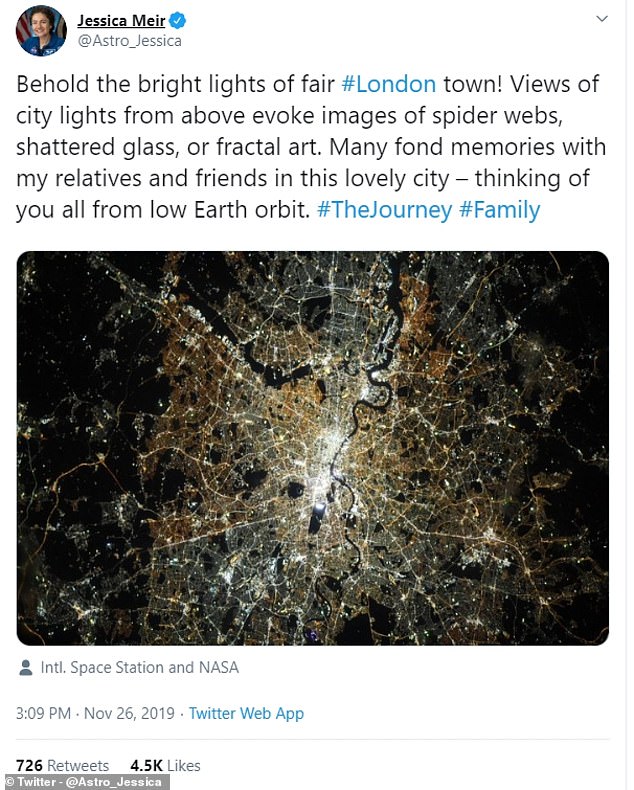 The International Space Station orbits about 250miles above the Earth and will orbit the planet about 16 times per day.

The ISS was launched on 20 November 1998 and features a number of different modules built by the various nations involved in the project. 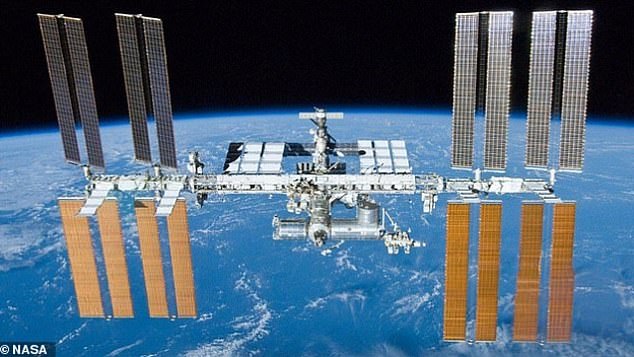 When he was on board the International Space Station in 2016 Major Tim Peake posted lots of pictures of the UK from space.

His images included one very similar to the picture taken by Dr Meir showing the lights of London looking like a spiders web branching out from the Thames.

At the time Major Peake said: ‘I’d rather be up here… but only just!’ 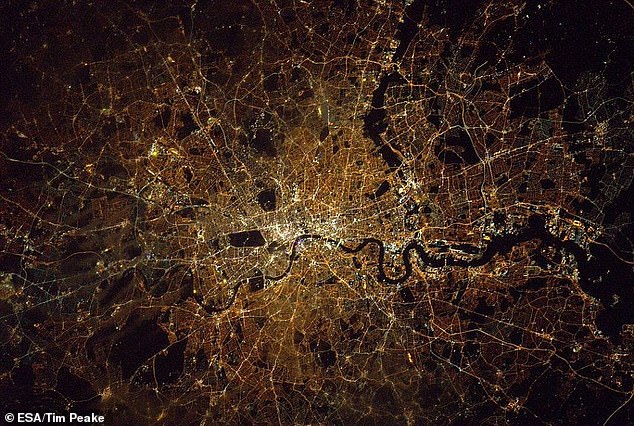 Major Tim Peake captured a similar, equally stunning image of London (pictured here) while he was abord the ISS in 2016