NASA confirms liquid water is present under the ice of Jupiter’s moon Europa, reigniting the theory there is an ocean twice the size of the ones on Earth hidden beneath the surface

NASA has confirmed the presence of liquid water on one of Jupiter’s 79 moons.

The American Space agency detected plume-like forms of water vapor above Europa’s icy surface, which were detected as a wavelength of emitted infrared light.

The research showed the moon releases more than 5,000 pounds of water per second – enough to fill an Olympic-sized swimming pool in only a few minutes.

These findings have also reignited a longstanding theory that an ocean twice of the ones on Earth lays hidden under the frozen shell.

Given the suspected abundance of warm, liquid water under its mile-thick ice shell, the moon is considered a ‘top candidate’ by NASA for life on a solar system body other than Earth.

NASA has confirmed the presence of water vapor on one of Jupiter’s 79 moons. The American Space agency detected plume-like forms of water vapor above Europa’s (artist impression) icy surface, which were detected as a wavelength of emitted infrared light

And the new findings could soon reveal the location of this massive alien ocean.

The discovered was made by an international research team led out of NASA’s Goddard Space Flight Center in Greenbelt, Maryland, who used the world’s largest telescopes in Hawaii to measure the vapor flowing out of Europa.

This is not the first time NASA has discussed the possibility of water vapor on the moon, as just last year researchers involved with the Galileo mission revealed the spacecraft may have flown right through a plume roughly 20 years ago.

However, researchers have been able to produce evidence that proves these allegation. 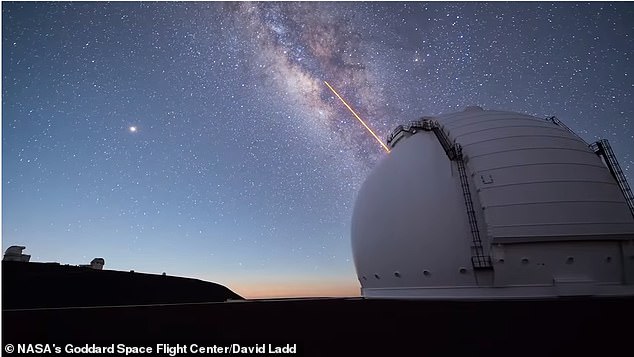 The discovered was made by an international research team led out of NASA’s Goddard Space Flight Center in Greenbelt, Maryland, who used the world’s largest telescopes in Hawaii to measure the vapor flowing out of Europa 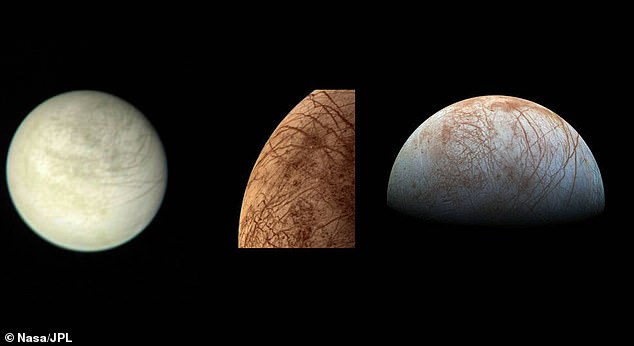 The team was able to detect the faint signal of water vapor just once over a period of 17 nights they observed from 2016 and 2017.

Looking at the moon from Keck Observatory, the scientists saw water molecules at Europa’s leading hemisphere, or the side of the moon that’s always facing in the direction of the moon’s orbit around Jupiter.

They used Keck Observatory’s Near-Infrared Spectrograph (NIRSPEC), which measures the chemical composition of planetary atmospheres through the infrared light they emit or absorb.

Molecules such as water emit specific frequencies of infrared light as they interact with solar radiation. 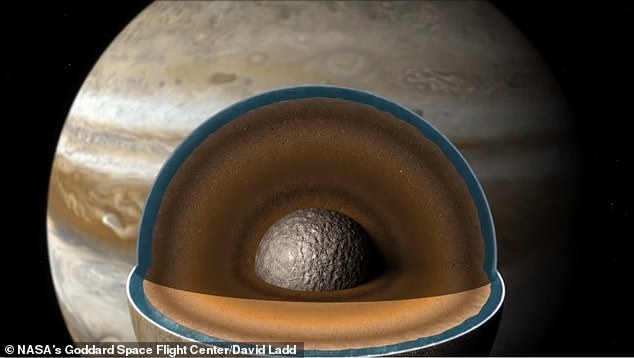 Looking at the moon from Keck Observatory, the scientists saw water molecules at Europa’s leading hemisphere, or the side of the moon that’s always facing in the direction of the moon’s orbit around Jupiter. The team believes the vapor comes from an ocean beneath the core

Lucas Paganini, a NASA planetary scientist who led the water detection investigation said: ‘Essential chemical elements (carbon, hydrogen, oxygen, nitrogen, phosphorus, and sulfur) and sources of energy, two of three requirements for life, are found all over the solar system.’

‘But the third—liquid water—is somewhat hard to find beyond Earth.’

‘While scientists have not yet detected liquid water directly, we’ve found the next best thing: water in vapor form.’