Oceans trapped beneath the icy surface of distant worlds at the edge of our solar system may be able to sustain liquid water for far longer than previously suspected.

Distant objects known to exist beyond Neptune’s orbit are known to be too cold to host liquid water at the surface, with temperatures dropping more than 350 degrees below zero Fahrenheit (below minus 200 Celsius).

But, there is evidence to suggest an interior liquid water layer exists beneath the crust.

According to new NASA research, heat created by the gravitational pull of moons formed in large collisions could be enough to extend the lifetimes of these subsurface oceans.

Distant objects known to exist beyond Neptune’s orbit are known to be too cold to host liquid water at the surface, with temperatures dropping more than 350 degrees below zero Fahrenheit (below minus 200 Celsius). Pluto and Charon, both TNOS, are shown above

Alien life may be lurking beneath Pluto’s crust, according to physicist Brian Cox.

His comments, made last year, come after the historic flyby of the dwarf planet by New Horizons, which uncovered huge glaciers and mountains made of water ice.

These features hint at the possibility of subterranean seas on the dwarf planet warm enough for organic chemistry to thrive, said Cox.

The probe ‘showed you that there may well be a subsurface ocean on Pluto,’ Cox told The Times.

‘[This] means – if our understanding of life on Earth is even slightly correct – that you could have living things there.

The findings mean the objects, known as Trans-Neptunian Objects (TNOs) could be considered as possible locations to find extraterrestrial life.

‘These objects need to be considered as potential reservoirs of water and life,’ said Prabal Saxena of NASA’s Goddard Space Flight Center in Greenbelt, Maryland.

‘If our study is correct, we now may have more places in our solar system that possess some of the critical elements for extraterrestrial life.’

According to NASA, there are likely dozens of these worlds.

Pluto and its moons, for example, are Trans-Neptunian Objects.

These may have erupted to the surface through cryovolcanism, bring the compounds up from the liquid water interior.

In TNOs, decaying radioactive elements can generate heat to melt a layer of the icy surface, and create a liquid ocean below.

While this could exist for billions of years, these elements eventually become more stable, and stop releasing heat.

This means the interior gradually cools, and in turn, the subsurface ocean will freeze.

But according to NASA, gravitational interactions could allow the oceans to maintain their liquidity.

When large celestial objects collide, moons can be born if material is thrust into orbit around the larger object and forms under its own gravity.

Eventually, these collision-generated moons adjust to a more stable orbit, NASA explains, and the gravitational pull between the moon and the planet world causes the interiors to stretch and relax.

This generates friction, and releases heat.

‘We found that tidal heating can be a tipping point that may have preserved oceans of liquid water beneath the surface of large TNOs like Pluto and Eris to the present day,’ said Wade Henning of NASA Goddard and the University of Maryland, College Park. 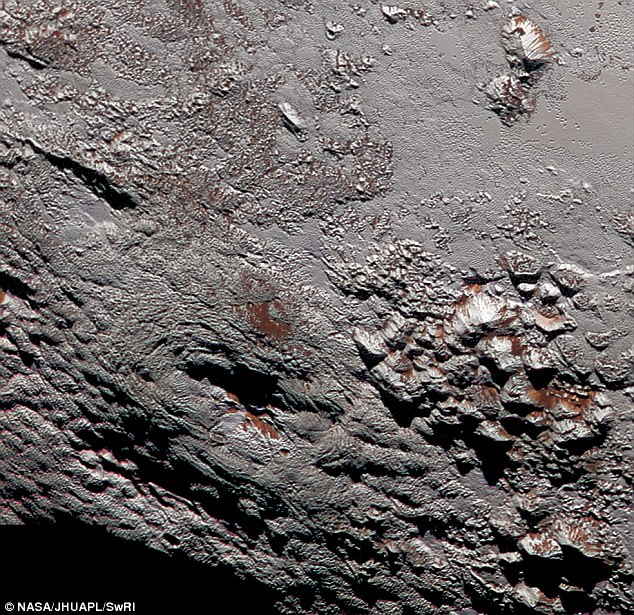 Light reflected from TNOS has revealed signatures of crystalline water ice and ammonia hydrates. These may have erupted to the surface through cryovolcanism, bring the compounds up from the liquid water interior. Two potential cryovolcanos on Pluto are shown

‘If you have a liquid water layer, the additional heat from tidal heating would cause the next adjacent layer of ice to melt.’

Liquid water alone is not enough to sustain life.

But, the researchers say the tidal heating could also give rise to hydrothermal vents, which could supply the ingredients for life.

The team plans to further investigate the processes to determine how long a the lifetime of a liquid ocean could be extended, and at what point the ocean itself forms, along with how energy dissipates in the heating process.