NASA has captured new footage of the moons of Mars from 19 images taken by the THEMIS camera.

The pictures used to make the video were shot using visible-wavelength light, so that the human eye can view the footage.

New footage from NASA’s Mars Odyssey satellite has captured the red planet’s two moons, Phobos and Deimos. This was the second observation of Phobos by Mars Odyssey

The camera’s name is an acronym for Thermal Emission Imaging System, and it is a feature of the orbiter Mars Odyssey.

A statement from NASA explained how the video was created.

‘The apparent motion is due to progression of the camera’s pointing during the 17-second span of the February 15, 2018, observation, not from motion of the two moons,’ the agency explained.

The latest footage is the second observation of Phobos by Mars Odyssey; the first was on September 29, 2017.

‘Researchers have been using THEMIS to examine Mars since early 2002, but the maneuver turning the orbiter around to point the camera at Phobos was developed only recently,’ NASA added.

At the time Phobos was observed, its distance from Mars Odyssey was around 3,489 miles.

Deimos’s distance from Mars Odyssey during its observation was around 12,222 miles. 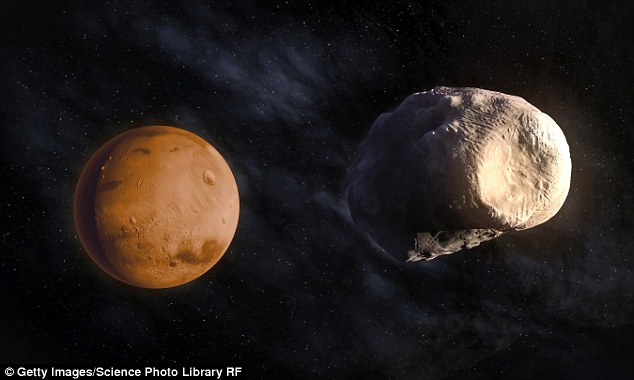 Pictured is an artists’s interpretation of Mars and its moon Phobos. NASA recently released a video of Mars’s moons Phobos and Deimos made from photos taken by the Mars Odyssey 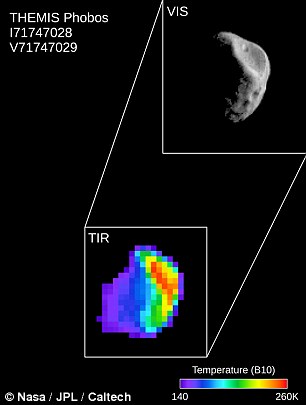 The orbiter was built by Lockheed Martin Space Systems, and the company partners with NASA to operate it.

In November news emerged that NASA’s Mars Odyssey orbiter captured its first images of the ‘Death Star’ moon Phobos – a region that could one day host a human-mission outpost.

Using the THEMIS camera the orbiter gathered new information on the changing surface temperatures of Phobos over the course of a day, revealing how quickly the ground warms and cools.

Stunning images from the September observation from NASA combined the visible-wavelength and infrared data to show the surface color-coded by temperature.

The data collected by the Odyssey could provide information on the mineral composition, as well as the texture, of the surface.

WHAT DO SCIENTISTS KNOW ABOUT MARS’S MOONS?

Mars’s moons were discovered by Asaph Hall in 1877, according to NASA.

He was close to giving up his search for the sight of a Martian moon when he discovered Deimos.

His wife Angelina encouraged him to keep looking, and he came across Deimos the next night. 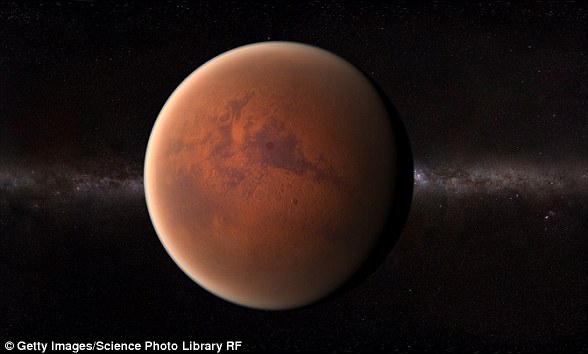 Nearly a century later, NASA’s Mariner 9 managed to get a better look at Phobos and Deimos from its Martian orbit.

The crater is roughly half the width of Phobos.

Mars’s moons are some of our solar system’s smallest. Phobos is only slightly larger than Deimos.