Nasa has announced two finalists for its billion-dollar robotic missions aimed at finding alien life and the origins of Earth.

The winner of the two missions – one to explore a comet and another Saturn’s moon Titan –  will launch in 2020s.

The missions were chosen under NASA’s New Frontiers competition programme, from 12 proposals that had been submitted of last year.

Nasa has announced two finalists for its billion-dollar robotic missions aimed at finding alien life. One is a mission to explore Saturn’s moon Titan with an eight-bladed ‘dragonfly’ drone (artist’s impression pictured)

‘These are tantalizing investigations that seek to answer some of the biggest questions in our solar system today,’ said Thomas Zurbuchen, associate administrator for NASA’s Science Mission Directorate.

Titan is Saturn’s largest moon, and is seen as one of the most likely hosts of some form of life in the solar system because of its rivers and lakes filled with methane.

The mission, called Dragonfly, would involve sending a ‘drone-like rotorcraft that would explore the prebiotic chemistry and habitability of dozens of sites,’ NASA said in a statement.

The eight-bladed ‘dragonfly’ drone would fly from one region of Titan to the next, recharging while landed using its own nuclear generator.

It could investigate potentially habitable sites on the moon, which has methane and ethane lakes and rivers.

It’s one of a few ‘ocean world’s’ in our solar system that has the ingredients for life, and the rich organic material that covers the moon is undergoing chemical processes that might be similar to those on early Earth.

The researchers want to take advantage of Titan’s dense, flight-enabling atmosphere to visit multiple sites by landing on safe terrain, and then moving to more challenging landscapes.

The CAESAR mission, pictured, will acquire a sample from the nucleus of comet Churyumov-Gerasimenko, returning it safely to Earth

The eight-bladed ‘dragonfly’ drone would fly from one region of Titan to the next, recharging while landed using its own electric generator.

The lander would use use two rotors at each of its four corners to fly from one region of the moon to the next.

It will recharge using a multimission radioisotope thermoelectric generator (MMRTG) it would carry with it, which converts the heat from decaying radioactive plutonium-238 into electricity.

Dragonfly could also drill and take samples, and examine the moon’s surface.

Sensors would allow it to track Titan’s atmosphere and weather, which has a methane cycle instead of Earth’s water cycle.

Titan’s thick atmosphere and low gravity make the mean that flight on Titan is easier and require less energy.

The largest moon of Saturn is a high priority for planetary exploration.

Titan is an ocean world, and the only moon in our Solar System with a dense atmosphere.

The abundant complex organic material accessible on Titan’s surface makes it an ideal destination to study the conditions necessary for the habitability of an extraterrestrial environment and the kinds of chemical interactions that occurred before life developed on Earth.

The two Voyager spacecraft observed Titan in 1979 and 1980, but the organic haze in the atmosphere obscured the surface at visible wavelengths.

The Hubble Space Telescope imaged Titan at longer near-infrared wavelengths in 1994, revealing large bright and dark regions on its surface.

However, the details of Titan’s surface landforms remained a mystery until July 2004, when Nasa’s Cassini spacecraft arrived.

Cassini used radar and imaging at near-infrared wavelengths to glimpse what lies below the hazy atmosphere.

During over 100 close flybys, the Cassini orbiter has coarsely mapped much of Titan’s surface and made detailed studies of its atmosphere.

Cassini also delivered the Huygens probe, which in 2005 parachuted safely down to Titan’s surface, measured winds and the atmosphere, and imaged a tiny part of the surface in close-up detail.

Cassini’s observations also point to a salty ocean beneath its water-ice crust, thus earning Titan the label of an ‘Ocean World’.

Dr Elizabeth Turtle, principal investigator for the Dragonfly mission, said: ‘This is the kind of experiment we can’t do in the laboratory because of the time scales involved.’

Titan’s environment was first discovered by the Cassini-Huygens mission in 2005, when it discovered that Methane rained into lakes and seas.

Over the years, it has revealed chemical environments with the potential to lead to life as it did on Earth.

‘The results are just sitting on the surface,’ said Dr Turtle.

‘If we can get to these different places on the surface of Titan, we can pick up the results of the experiments.

‘They’re just waiting for us,’ she said.

To explore Mars, researchers used rovers. But instead, Dr Turtle wants to use drones to travel in Titan’s thick atmosphere, which is four times more dense than Earth’s and would make drone flight easier.

Dragonfly wouldn’t just fly from site to site, it could also drill and take samples, and examine the moon’s surface. Sensors would allow it to track Titan’s atmosphere and weather – which has a methane cycle instead of Earth’s water cycle 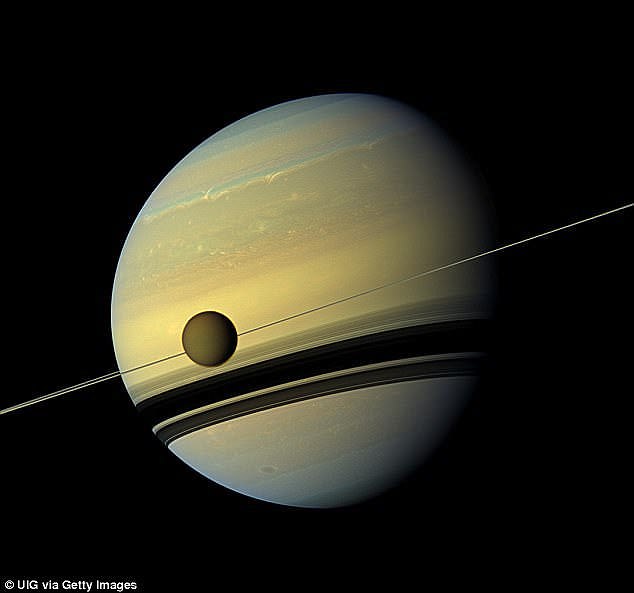 The other project would return to 67P/Churyumov-Gerasimenko, a comet that has already been visited and mapped by the European Rosetta spacecraft.

The mission, called Comet Astrobiology Exploration Sample Return (CAESAR), would aim to return a sample from 67P/Churyumov-Gerasimenko, to determine its origin and history.

By taking a sample from Churyumov-Gerasimenko, also called 67P, the team hopes to learn more about the origins of Earth.

‘The CAESAR and Dragonfly missions will receive funding through the end of 2018 to further develop and mature their concepts,’ the US space agency said.

The CAESAR mission seeks to return a sample to earth from the nucleus of 67P/Churyumov-Gerasimenko, a comet that was successfully explored by the European Space Agency’s Rosetta spacecraft, to determine its origin and history.

Comets are made up of materials from ancient stars, interstellar clouds, and the birth of our Solar System.

The CAESAR sample will reveal how these materials contributed to the early Earth, including the origins of the Earth’s oceans, and of life.

Led by Squyres, CAESAR would be managed by NASA’s Goddard Space Flight Center in Greenbelt, Maryland.

Comet 67P is one of numerous short period comets which have orbital periods of less than 20 years and a low orbital inclination.

Since their orbits are controlled by Jupiter’s gravity, they are also called Jupiter Family comets.

These comets are believed to originate from the Kuiper Belt, a large reservoir of small icy bodies located just beyond Neptune.

As a result of collisions or gravitational perturbations, some of these icy objects are ejected from the Kuiper Belt and fall towards the Sun.

When they cross the orbit of Jupiter, the comets gravitationally interact with the massive planet.

Their orbits gradually change as a result of these interactions until they are eventually thrown out of the Solar System or collide with a planet or the Sun.

‘NASA plans to select one of these investigations in the spring of 2019 to continue on to subsequent mission phases.’

NASA chose the pair from a pool of 12 proposed missions, submitted in April.

The competition is part of NASA’s New Frontiers program, which has also sent the Juno spacecraft into orbit around Jupiter, the New Horizons spacecraft which surveyed Pluto, and OSIRIS-REx, which launched last year to collect samples from an asteroid.

Each mission selected has a cost cap for development of approximately $850 million, with another $150 million planned for the launch. 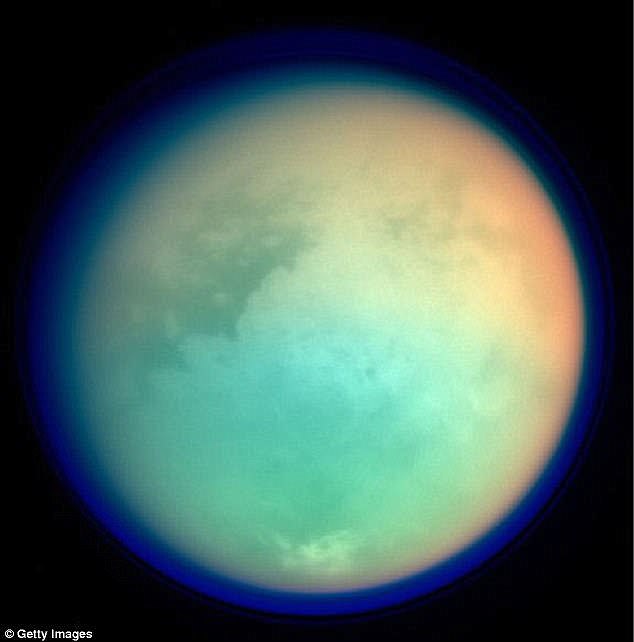 This image shows Saturn’s moon, Titan, in ultraviolet and infrared wavelengths. The Cassini spacecraft took the image while on its mission to gather information on Saturn, its rings, atmosphere and moons. The different colors represent various atmospheric content on Titan 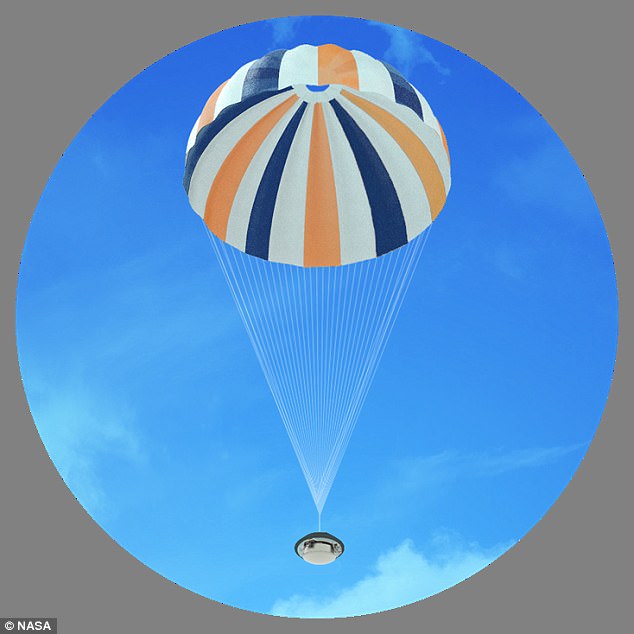 CAESAR will return its sample to Earth 14 years after launch. The missions were chosen under NASA’s New Frontiers competition programme, from 12 proposals that had been submitted of last year