NASA says mysterious dancing blue lights spotted over the Arctic Circle were caused by vapor tests and NOT aliens, as some feared

Stargazers in northern Norway enjoyed an unexpected light show when a new NASA test showered the skies with brushstrokes of blue and orange-colored gases.

The lights, which looked like an ‘alien attack’ attack to some, were actually a part of an ongoing NASA experiment dubbed The Auroral Zone Upwelling Rocket Experiment (AZURE).

As a part of the mission, NASA says it has launched the AZURE test rocket — the first of eight such planed launches — that aim to study the patterns of solar winds.

The eye-catching lights were created by releasing two harmless gases into the atmosphere — trimethylaluminum as well as a mixture of barium and strontium — so researchers can study the paths of particles in the Earth’s ionosphere, NASA says.

Captures of the show were grabbed via a webcam run by Lights Over Lapland, which helps sightseers get a glimpse of Aurora’s through guided tours.

According to scientists, the experiment will also help unlock the forces behind one of nature’s most capturing phenomenon, the Aurora Borealis.

Auroras — the shows of green, blue, and purple light observed in the skies of regions close to the Earth’s poles — are created by solar winds interacting with the planet’s magnetic field.

When the particles of the two atmospheric regions collide and their respective particles are charged, the trajectories are changed, which forces electrons and protons down into the atmosphere at which point humans are able to observe them as streaks of colorful light.

Gases released by NASA in their vapor test were subject to a similar process.

While scientists have inferred the cause of Auroras, they have yet to actually observe the pattern and behavior of solar winds and the ionosphere that drive them beyond computer-generated models. 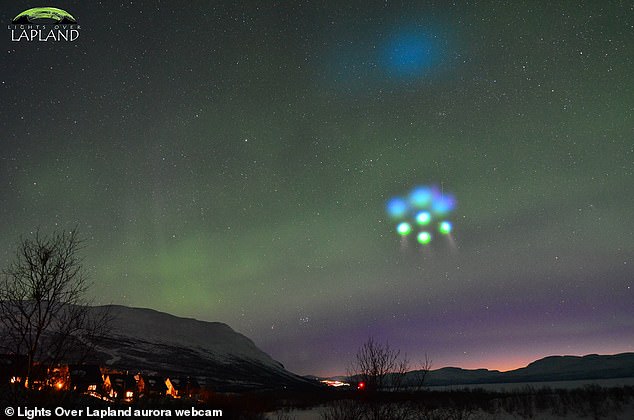 No need to run for cover yet. Alien-like lights in skies over Norway were the result of a test by NASA to study solar winds and Earth’s upper atmosphere.  www.lightsoverlapland.com

That’s where AZURE comes in.

Projects like the one witness by stargazers this month will help scientists gain exact measurements of both horizontal and vertical pathways of particles in the ionosphere over a range of altitudes and help increase understanding of the Auroras they create. 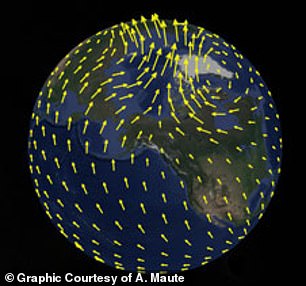 Solar winds have not yet been concretely tracked by scientists who rely mostly on computer-generated models.

In addition to creating beautiful displays of light, the interaction between solar winds and the Earth’s magnetic field are also crucial to creating the conditions for much of our planet’s life.

Solar winds, waves of particles released from the sun, are rife with radiation, which if beamed to the Earth’s surface, would severely damage all of our planet’s inhabitants.

Instead, however, the sun’s particles are deflected away from the planet by the Earth’s magnetic field, known as the magnetosphere.

NASA says its experiments will also help to glean a fuller picture of what happens when particles from the solar winds are forced into our atmosphere and exactly where they go.

HOW IS THE SOLAR WIND FORMED?