NASA has spotted mysterious circles in the Arctic Sea during their annual flights over the earth’s polar regions.

Operation IceBridge is currently on its tenth year making the flights over in Greenland and Antarctica – an effort to map the remote regions’ land and sea ice and predict its response to climate change.

While flying over the eastern Beaufort Sea on April 14, scientist John Sonntag noticed there was something on the ice he had never seen before and took a photo from the window of the P-3 research plane.

The circles were spotted about 50 miles northwest of Canada’s Mackenzie River Delta, according to NASA.

Scientists on an April 14 Operation IceBridge flight over the Arctic spotted mysterious circles. One of NASA’s theories is that seals gnawed out the holes to make space so they can surface. Another possibility is the holes were caused by convection

‘We saw these sorta-circular features only for a few minutes today,’ Sonntag wrote from the field. ‘I don’t recall seeing this sort of thing elsewhere.’

IceBridge project scientist Nathan Kurtz said the image shows an area of thin ice because you can see finger rafting near the holes and the gray color, which indicates little snow cover.

Kurtz echoed Sonntag’s thoughts, saying he’s never seen anything like the circles in the ice and isn’t sure what could cause the semi-circle shaped features surrounding the holes. 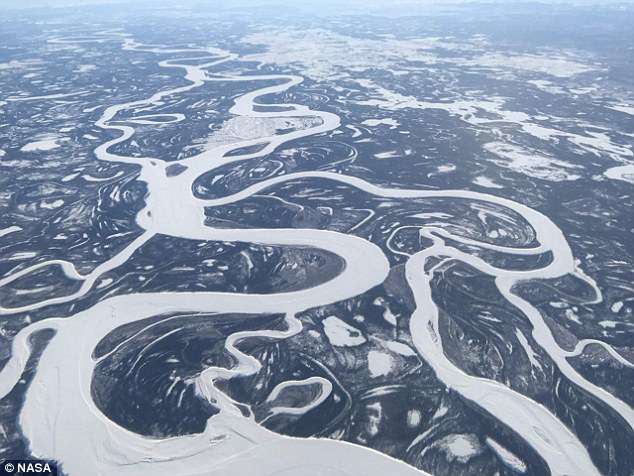 The project has the goal of mapping the regions’ land and sea ice and predicting its response to climate change. This image shows a winding river through Alaska on April 9 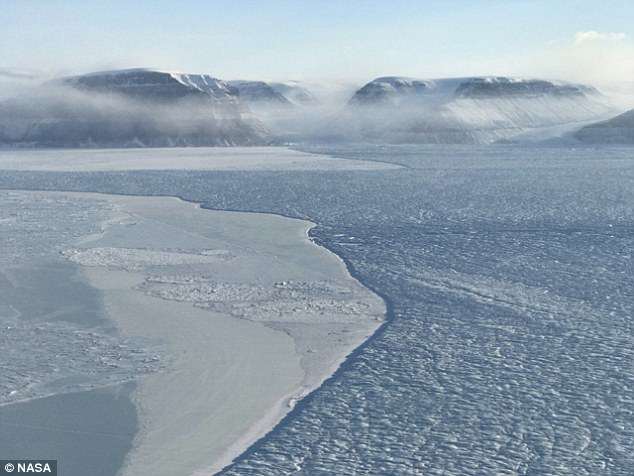 NASA has speculated what could have cause the circles to form.

One of their theories is that seals gnawed out the holes to make an open space in the ice so they can surface and breathe.

Another possibility is that the holes were caused by convection- hotter water , less dense ice rising ad colder, more dense ice to sink under the pressure of gravity, which results in a transfer of heat.