NASA has created a new ‘mini’ Mars rover that will be able to climb hills even if they’re covered in sand and gravel – perfect for future exploration missions.

Driven by the knowledge that the rolling hills of Mars are a long way from the nearest tow truck, Georgia Tech researchers created a more resilient ‘wiggling’ vehicle.

Unlike the NASA Curiosity rover currently on Mars, or NASA Perseverance launching this summer, this ‘mini’ design can walk, paddle and wheelspin its way up a hill.

The team created the mini vehicle based on the NASA Resource Prospector 15 (RP15) rover that can wiggle its wheels to enhance and test the design.

Professor Dan Goldman, from the School of Physics at the Georgia Institute of Technology, said the rover was built using 3D printed parts.

Using a complex move the researchers dubbed ‘rear rotator pedaling’, the robot can climb a slope by using its unique design – it has wheeled appendages that can be remotely lifted – to combine paddling, walking, and wheelspinning motions.

‘When loose materials flow, that can create problems for robots moving across it,’ said Professor Goldman from Georgia Tech.

‘This rover has enough degrees of freedom that it can get out of jams pretty effectively,’ he added.

It uses the front wheels to push gravel down that creates a ‘fluid hill’ for the back wheels that isn’t as steep as the real slope it’s trying to climb.

‘The rover is always self-generating a good hill for itself,’ said Goldman.

It’s currently only in mini form but the team hope to now scale it up to the larger car-sized robots usually sent to the Red Planet by NASA, ESA and others 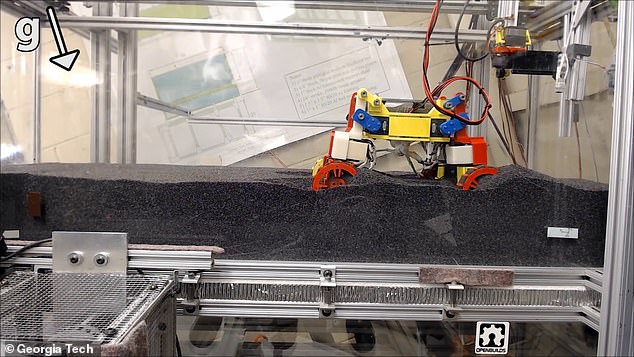 Professor Dan Goldman, from the School of Physics at the Georgia Institute of Technology, said the rover was built using 3D printed parts

While a robot built by NASA’s Johnson Space Centre previously pioneered the ability to spin its wheels, engineers at Georgia Tech recreated those capabilities in a scaled-down vehicle – with four-wheeled appendages driven by 12 different motors.

‘This enabled our team to use our robot as a robust laboratory tool and focus our efforts on exploring creative and interesting experiments without worrying about damaging the rover, service downtime, or hitting performance limitations.’

In May 2009, engineers on Earth scrambled to rescue the NASA rover Spirit stuck in regolith – a soft soil that can flow like a fluid when disturbed – near the Gusev crater on Mars.

Despite their persistent efforts, Spirit could not escape the site, and scientists were forced to end the mission in 2011.

However, the Resource Prospector mission concept was cancelled in 2018, stalling further development of the new rover – but the researchers decided to create this new miniature version to continue testing it in the lab on the smaller budget. 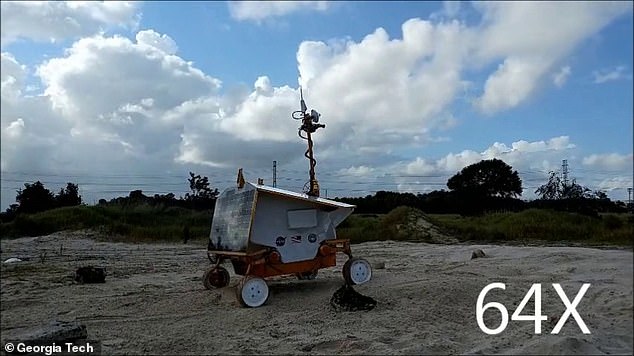 There is an existing rover that is able to wheelspin and wiggle wheels – called the R15 (pictured) but this is the first mini rover that can also generate a flow of mud behind it. The team used the R15 as inspiration

The rover’s broad range of movements gave the team the chance to test a number of different variations and calculations.

They created a range of slopes designed to simulate the hills found on Mars and the moon to test the rovers ability.

Using a system known as SCATTER – Systematic Creation of Arbitrary Terrain and Testing of Exploratory Robots – the rover is able to tilt to evaluate the terrain it is tackling.

Andras Karsai, a PhD candidate at Georgia Tech’s School of Physics, added: ‘By creating a small robot with capabilities similar to the RP15 rover, we could test the principles of locomoting with various gaits in a controlled laboratory environment. 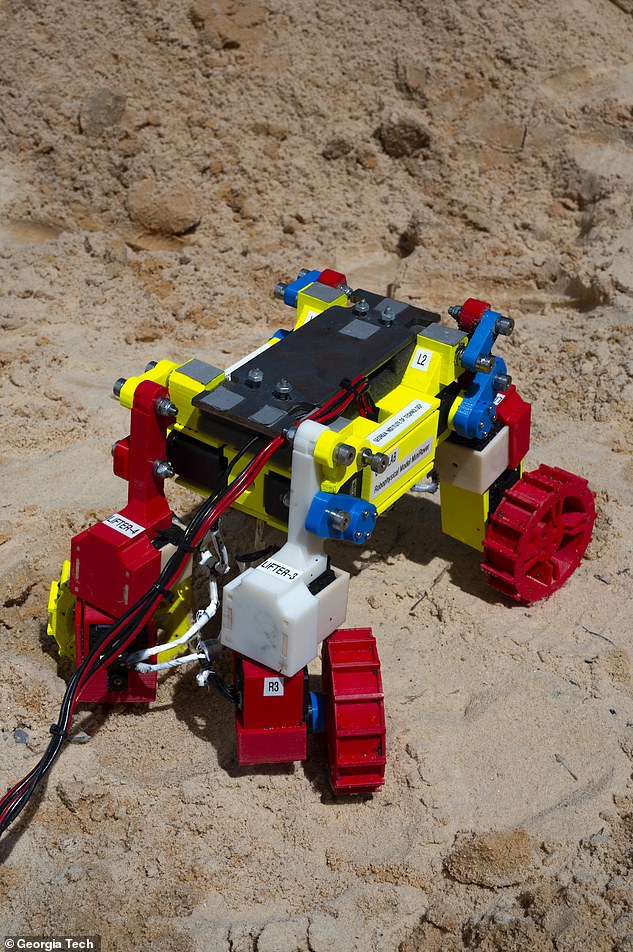 ‘In our tests, we primarily varied the gait, the locomotion medium, and the slope the robot had to climb.

‘We quickly iterated over many gait strategies and terrain conditions to examine the phenomena that emerged.’

In the paper, the authors describe a gait that allowed the rover to climb a steep slope with the front wheels stirring up the granular material.

They used poppy seeds for the lab testing and the rover pushed them back toward the rear wheels over the vehicle. 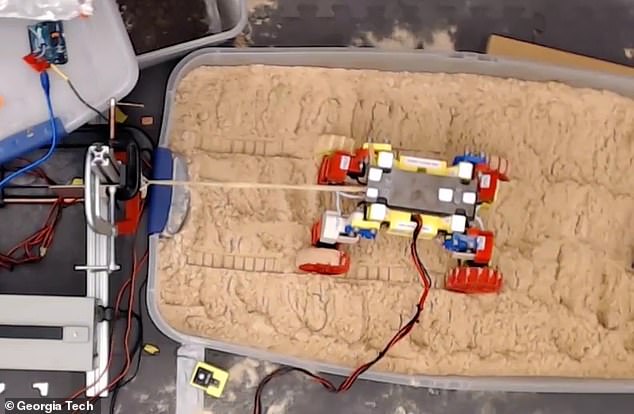 In the paper, the authors describe a gait that allowed the rover to climb a steep slope with the front wheels stirring up the granular material

The rear wheels wiggled from side-to-side, lifting and spinning to create a motion that resembles paddling in water.

The material pushed to the back wheels effectively changed the slope the rear wheels had to climb, allowing the rover to make steady progress up a hill that might have stopped a normal robot.

Professor Goldman said: ‘In our previous studies of pure legged robots, modeled on animals, we had kind of figured out that the secret was to not make a mess.

‘If you end up making too much of a mess with most robots, you end up just paddling and digging into the granular material. 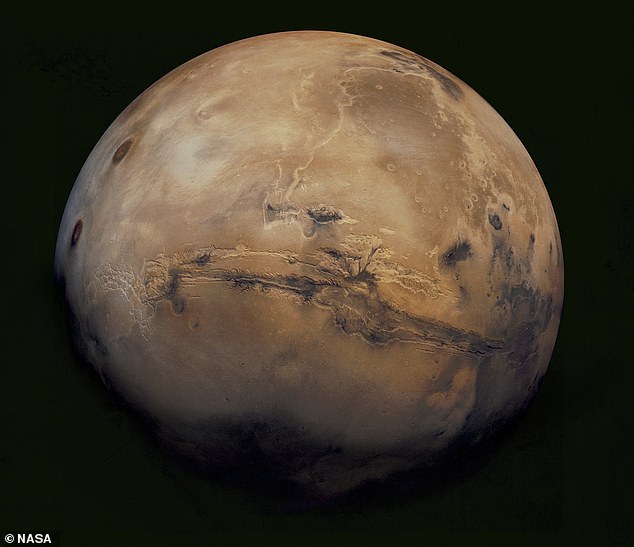 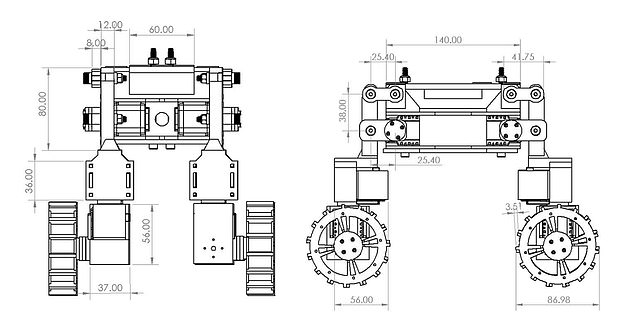 ‘If you want fast locomotion, we found that you should try to keep the material as solid as possible by tweaking the parameters of motion.’

This combination of lifting and wheeling and paddling, if used properly, provides the ability to maintain some forward progress even if it is slow.

‘Through our laboratory experiments, we have shown principles that could lead to improved robustness in planetary exploration – and even in challenging surfaces on our own planet,’ said Goldman. 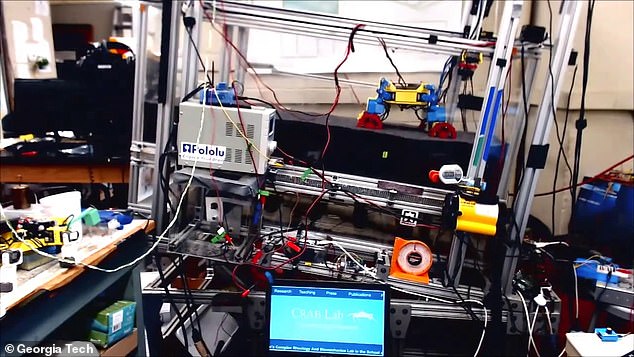 Though the Mini Rover was designed to study lunar and planetary exploration, the lessons learned could also be applicable to our own planet.

The US Army Research Laboratory is one of the project’s sponsors.

‘This may lead to novel, terrain-aware platforms capable of intelligently transitioning between wheeled and legged modes of movement to maintain high operational tempo.’

The research has been published in the journal Science Robotics.