The image is the closest look at Europa that any spacecraft has provided in more than 20 years, when the US space agency’s Galileo came within 218 miles (351 km) of the surface in January 2000.

Europa is the sixth-largest moon in the solar system, slightly smaller than Earth’s moon.

Up close and personal: NASA’s Juno spacecraft has taken its first picture of Jupiter’s moon Europa — capturing the ice-encrusted surface in extraordinary detail 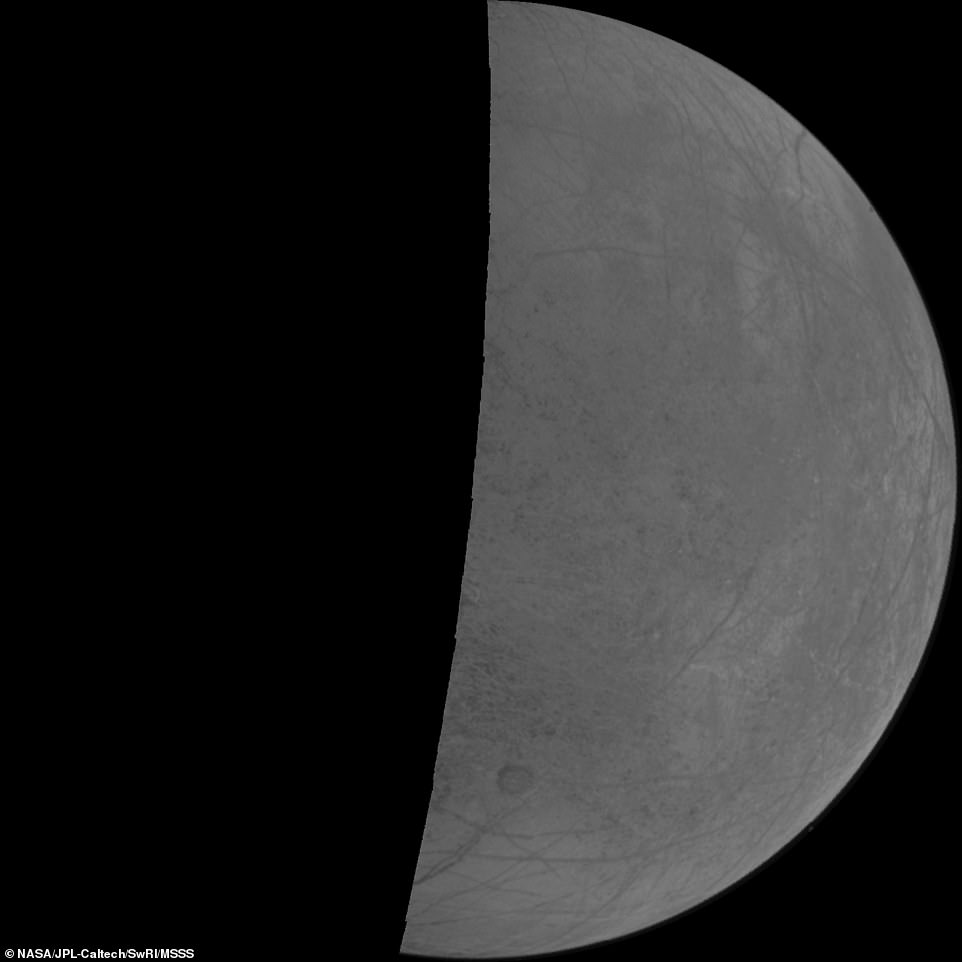 The images are the closest look at Europa that any spacecraft has provided in more than 20 years, when the US space agency’s Galileo came within 218 miles (351 km) of the surface in January 2000 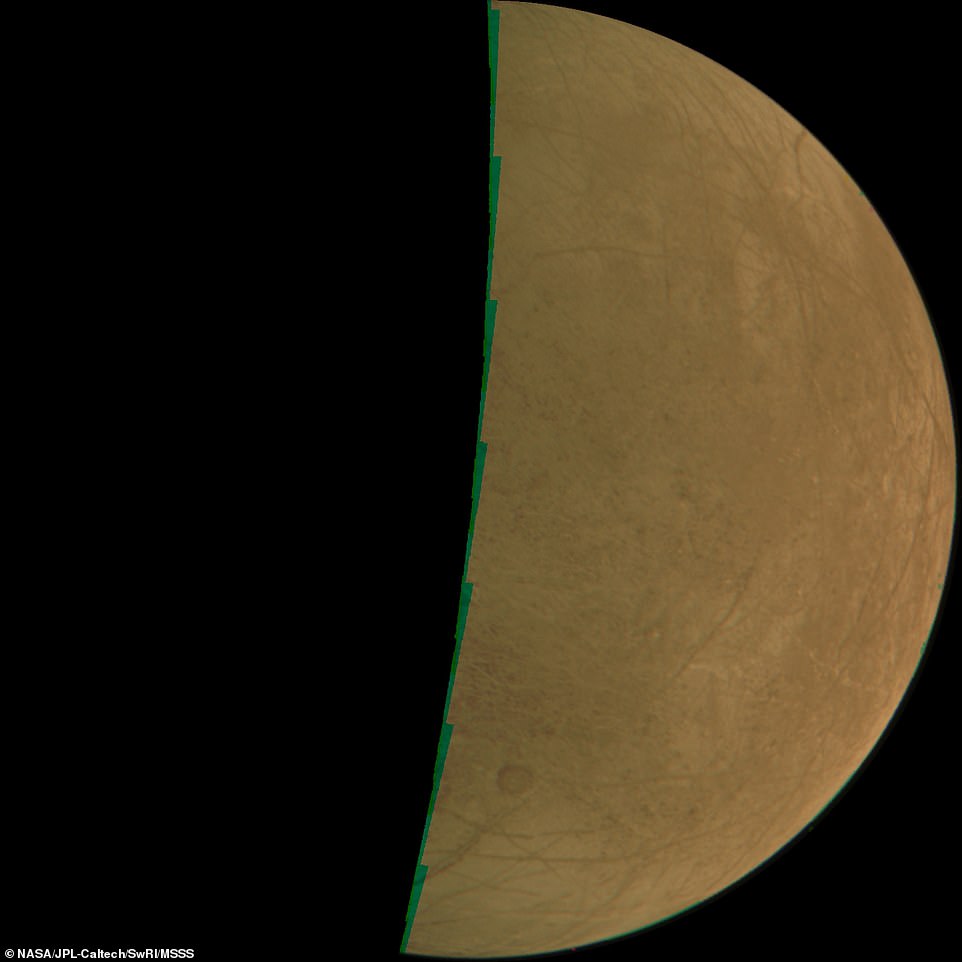 WHAT DO WE KNOW ABOUT EUROPA?

Europa orbits Jupiter every 3.5 days and is tidally locked – just like Earth’s moon – so that the same side of Europa faces Jupiter at all times.

NASA scientists are on the verge of exploring Jupiter’s ocean moon Europa for signs of alien life.

As exciting as Juno’s data will be, the spacecraft had only a two-hour window to collect it, racing past the moon with a relative velocity of about 14.7 miles per second (23.6 kilometers per second).

‘It’s very early in the process, but by all indications Juno’s flyby of Europa was a great success,’ said Scott Bolton, Juno principal investigator from Southwest Research Institute in San Antonio.

‘This first picture is just a glimpse of the remarkable new science to come from Juno’s entire suite of instruments and sensors that acquired data as we skimmed over the moon’s icy crust.’

This segment of the first image of Europa taken during this flyby by the spacecraft’s JunoCam zooms in on a swath of Europa’s surface north of the equator.

Due to the enhanced contrast between light and shadow seen along the terminator – the nightside boundary – rugged terrain features are easily seen, including tall shadow-casting blocks, while bright and dark ridges and troughs curve across the surface.

The oblong pit near the terminator might be a degraded impact crater.

During the flyby, the mission collected what will be some of the highest-resolution images of the moon and obtained valuable data on Europa’s ice shell structure, interior, surface composition, and ionosphere, in addition to the moon’s interaction with Jupiter’s magnetosphere.

‘The science team will be comparing the full set of images obtained by Juno with images from previous missions, looking to see if Europa’s surface features have changed over the past two decades,’ said Candy Hansen, a Juno co-investigator who leads planning for the camera at the Planetary Science Institute in Tucson, Arizona.

‘The JunoCam images will fill in the current geologic map, replacing existing low-resolution coverage of the area.’

Juno’s close-up views and data from its Microwave Radiometer (MWR) instrument will provide new details on how the structure of Europa’s ice varies beneath its crust.

Scientists can use all this information to generate new insights into the moon, including data in the search for regions where liquid water may exist in shallow subsurface pockets.

With this additional data about Europa’s geology, Juno’s observations will benefit future missions to the Jovian moon, including the agency’s Europa Clipper. 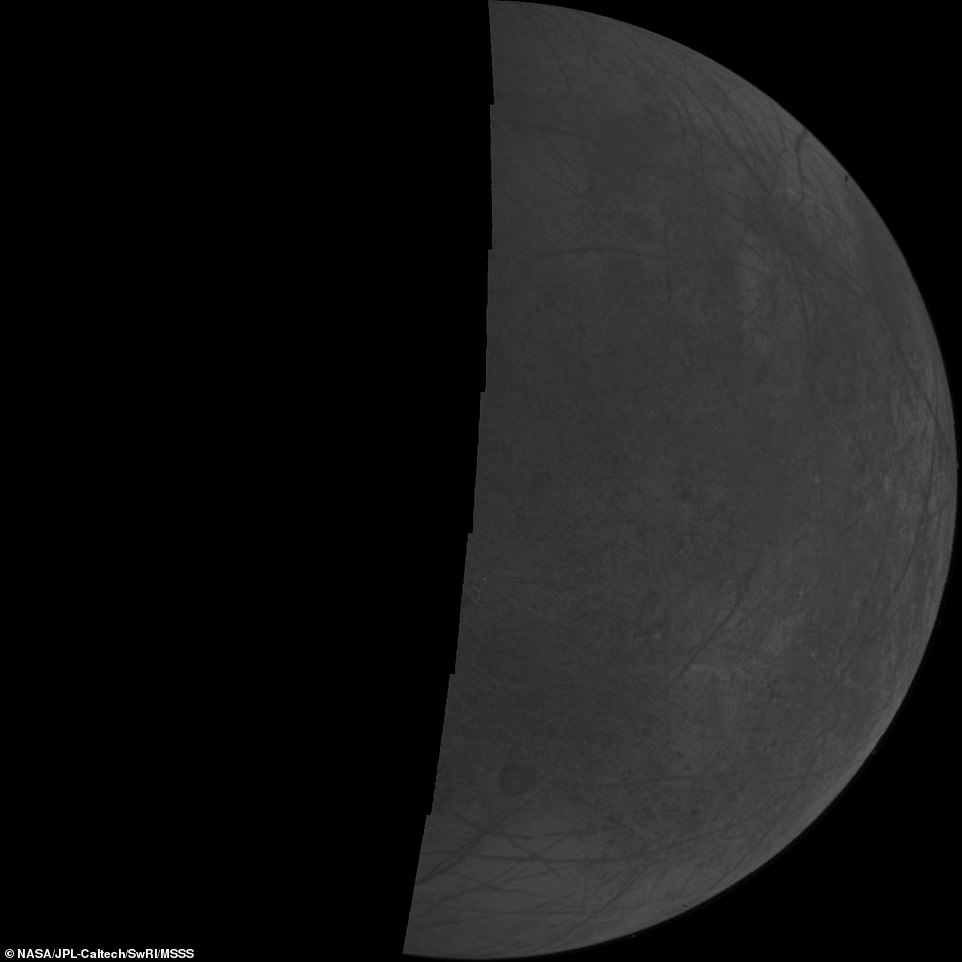 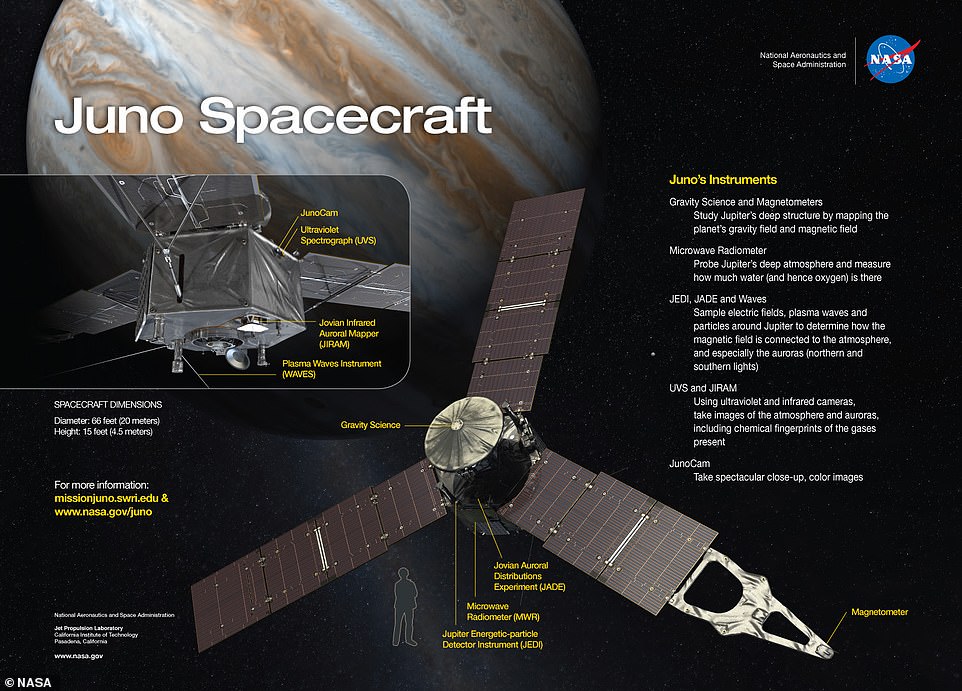 The Juno probe — depicted here in an artist’s impression — reached Jupiter on July 4, 2016, after a five-year, 1.8 billion-mile (2.8 billion kilometre) journey from Earth

Set to launch in 2024, Europa Clipper will study the moon’s atmosphere, surface, and interior, with its main science goal being to determine whether there are places below Europa’s surface that could support life.

Building on Juno’s observations and previous missions such as Voyager 2 and Galileo, the Europa Clipper mission will study the moon’s atmosphere, surface, and interior when it arrives in 2030.

Its goal is to investigate habitability of the moon and better understand its global subsurface ocean, the thickness of its ice crust, and search for possible plumes that may be venting subsurface water into space.

The close flyby modified Juno’s trajectory, reducing the time it takes to orbit Jupiter from 43 to 38 days.

It marks the second encounter with a Galilean moon during Juno’s extended mission, having previously observed Ganymede in June 2021.

The spacecraft is also scheduled to make close flybys of Io, the most volcanic body in the solar system, in 2023 and 2024.

The craft is expected to study the composition of the planet’s atmosphere until 2025.