Martian dust has gained somewhat of a notorious reputation thanks to its recent role in bringing the Opportunity mission to an end.

But, dust and wind are just another part of existence on the red planet, and as quickly as it settles it can also be swept away.

NASA’s InSight lander, which arrived to Mars only a few short months ago, has already learned this lesson; after a recent ‘dust clearing’ event, winds cleared its solar panels enough to temporarily boost its power.

Thanks to InSight’s meteorological sensors, scientists have now obtained the first ever measurements of the interactions between dust and wind on Mars as they happen, providing crucial new insight for future exploration missions. 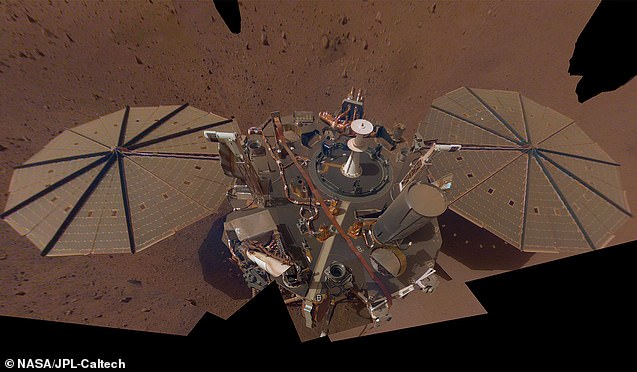 NASA’s InSight lander, which arrived to Mars only a few short months ago, has already learned this lesson; after a recent ‘dust clearing’ event, winds cleared its solar panels enough to temporarily boost its power. Slide the bar to see what it looks like with the layer of dust

The Spirit and Opportunity rovers were subjected to intense dust events during their stays on the red planet, as well as powerful clearing events.

In some cases, these dust-clearing wind gusts boosted power by as much as 10 percent, NASA says.

While InSight hasn’t yet experienced anything as dramatic, with about 0.7 percent boost recorded for one panel and 2.7 percent on the other after a passing wind vortex, the lander is getting first-hand measurements of the phenomenon.

‘It gives us a starting point for understanding how the wind is driving changes on the surface. We still don’t really know how much wind it takes to lift dust on Mars.’

According to InSight’s Auxiliary Payload Sensor Suite (APSS) the wind direction changed by roughly 180 degrees during a wind vortex (or dust devil) on February 1.

At its peak, the wind hit 45 miles per hour (20 meters per second), and the region experienced a pressure drop of about 13 percent. 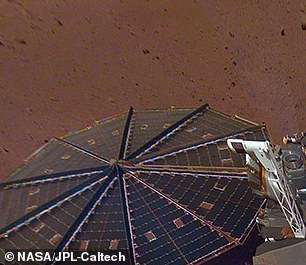 This is the biggest recorded at the surface yet.

‘The absolute fastest wind we’ve directly measured so far from InSight was 63 miles per hour (28 meters per second), so the vortex that lifted dust off our solar panels was among the strongest winds we’ve seen,’ said InSight participating scientist Aymeric Spiga of the Dynamic Meteorology Laboratory at Sorbonne University in Paris.

‘Without a passing vortex, the winds are more typically between about 4-20 miles per hour (2-10 meters per second), depending on the time of day.’

The power output of InSight’s solar panels has since dropped by about 30 percent as dust again accumulates and Mars moves further from the sun.

But, it has plenty of energy for its daily activities, NASA says.

WHAT ARE INSIGHT’S THREE KEY INSTRUMENTS?

The seismometer records the waves travelling through the interior structure of a planet.