Nasa’s spacecraft made to deflect asteroids has entered final stages

Nasa’s plans to launch a spacecraft capable of crashing into an asteroid to knock it off its collision course with Earth has now entered the final stages.

The space agency is set to fire its Double Asteroid Redirection Test (DART) system, which could one-day be called upon to save the planet, into space by 2020.

DART is set to target the binary asteroid Didymos to test the system, following approval from Nasa late last month.

Although the egg-shaped target, also known as ‘Didymoon’, is only 160 metres (525ft) across, the test will highlight whether the technique cold be used to deflect a much larger asteroid that threatens to wipe out human civilisation.

The DART system is being designed, built and managed by the Johns Hopkins Applied Physics Laboratory (APL) in Laurel, Maryland.

The joint US-European Aida (Asteroid Deflection & Assessment) mission will crash a probe into the smallest of two binary asteroids to test whether the object’s path is able to be altered by the spacecraft.

As it stands, Nasa is unable to deflect an asteroid set to impact Earth.

The space agency could only hope to mitigate the impact of the asteroid by issuing evacuation orders to protect lives and property.

‘With DART, we want to understand the nature of asteroids by seeing how a representative body reacts when impacted, with an eye toward applying that knowledge if we are faced with the need to deflect an incoming object,’ said APL’s Andrew Rivkin, who co-leads the DART investigation with APL’s Andrew Cheng.

‘In addition, DART will be the first planned visit to a binary asteroid system, which is an important subset of near-Earth asteroids and one we have yet to fully understand.’

DART would use what is known as a ‘kinetic impactor technique’ — striking the asteroid to shift its orbit.

The impact would change the speed of a threatening asteroid by a small fraction of its total velocity.

However, doing so well before a predicted impact adds up enough over time to result in a big shift of the asteroid’s path from Earth. Dr Patrick Michel, lead investigator for the European Space Agency half of the mission, said back in 2015: ‘To protect Earth from potentially hazardous impacts, we need to understand asteroids much better – what they are made of, their structure, origins and how they respond to collisions.

‘Aida will be the first mission to study an asteroid binary system, as well as the first to test whether we can deflect an asteroid through an impact with a spacecraft.

‘The European part of the mission… will study the structure of Didymoon and the orbit and rotation of the binary system, providing clues to its origin and evolution. 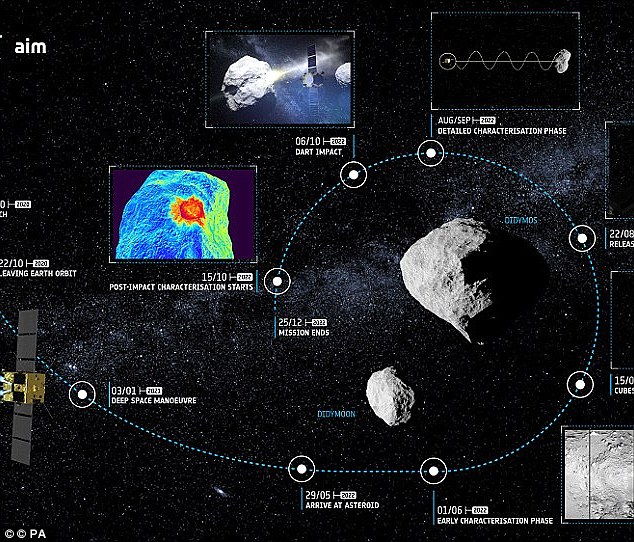 How it will work: A pair of spacecraft, the ESA-led Asteroid Impact Mission (AIM) and NASA-led Double Asteroid Redirection Test (DART), will rendezvous with the Didymos asteroid and its small natural satellite, known informally as Didymos

‘Asteroids represent different stages in the rocky road to planetary formation, so offer fascinating snapshots into the solar system’s history.’

Aim will measure properties of Didymoon, including its mass and density, before deploying a small lander to investigate the object’s internal structure.

Recent missions have shown that asteroids vary greatly in their geology, structure and evolution.

Almost all asteroids appear to be covered by soil, known as ‘regolith’, but this varies from fine grains to lumpy pebbles.

Most asteroids are aggregates of material, rather than solid bodies, but it is unclear whether they are filled with large rocks, pockets of empty space, or finer gravel.

Didymos made its closest recent approach to Earth in 2003, a distance of 7.18 million kilometres (4.46 million miles).

WHAT COULD WE DO TO STOP AN ASTEROID COLLIDING WITH EARTH?

Currently Nasa would not be able to deflect an asteroid if it were heading for Earth but it could mitigate the impact and take measures that would protect lives and property.

This would include evacuating the impact area and moving key infrastructure.

Finding out about the orbit trajectory, size, shape, mass, composition and rotational dynamics would help experts determine the severity of a potential impact.

However, the key to mitigating damage is to find any potential threat as early as possible.

Nasa is currently moving forward with a refrigerator-sized spacecraft capable of preventing asteroids from colliding with Earth. A test with a small, nonthreatening asteroid is planned for 2024.

This is the first-ever mission to demonstrate an asteroid deflection technique for planetary defence.

The Double Asteroid Redirection Test (DART) would use what is known as a kinetic impactor technique—striking the asteroid to shift its orbit.

The impact would change the speed of a threatening asteroid by a small fraction of its total velocity, but by doing so well before the predicted impact, this small nudge will add up over time to a big shift of the asteroid’s path away from Earth.