National Express driver drags a passenger from his coach

This is the shocking moment a National Express driver appears to drag a screaming passenger from a coach.

The driver, who has now been suspended, can be seen forcibly trying to remove the woman as she resists and tries to re-board the vehicle.

At the beginning of the footage the female passenger screams ‘let me on’ as the driver attempts to kick her off the coach. 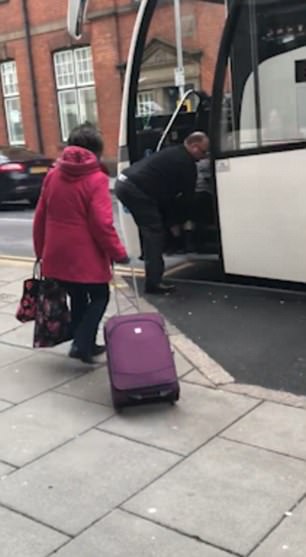 It is believed that the coach the woman was trying to board was the 310 from Nottingham to Poole but was told she had to print out her e-ticket.

Shocked onlookers can be seen trying to intervene during the dispute shown in the video taken by Saul Morgan, 37.

Mr Morgan told MailOnline: ‘It was surreal, I couldn’t believe I was watching it.

‘I watched the whole thing unfold, he wouldn’t let her on because she hadn’t printed off her ticket but she had an e-ticket.

‘She tried to get on the bus and she was screaming as he was trying to grab her foot and get her off.

‘He was making out like it was her fault when he had just assaulted her.’

Mr Morgan claimed that he was impressed with National Express’ quick-thinking actions that led to the driver being removed from the bus at the next available stop. 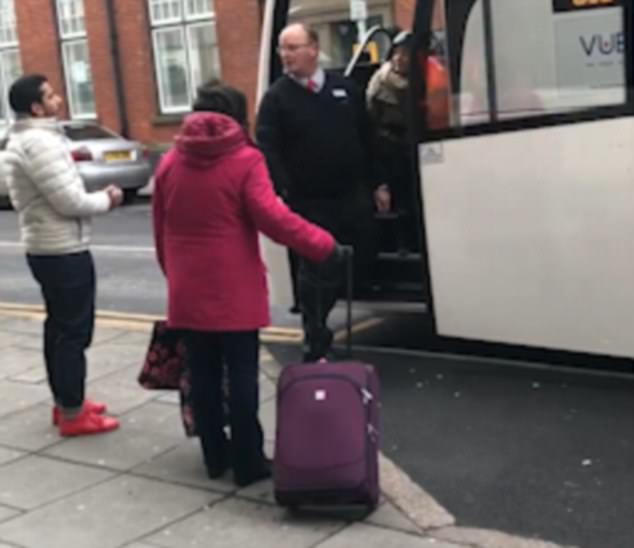 However despite the driver initially trying to drag the passenger from the bus she was later allowed to stay on.

A National Express spokesman said: ‘We apologise for the actions of our driver, which clearly fell far below the professional standards expected of all our staff.

‘We intercepted the vehicle at the next available stop to remove the driver from the service and offer our apologies and support to the customer involved and other passengers.

‘The driver was immediately suspended and the disciplinary process is underway which will be concluded swiftly.’